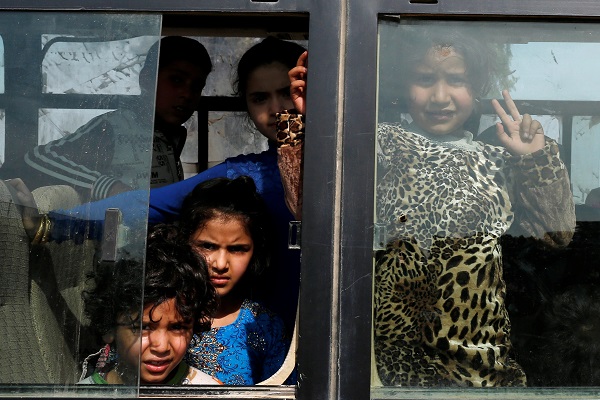 Displaced Iraqi families who fled from clashes during a battle between Iraqi forces and Islamic State look out of a bus window as they wait to be transferred to different camps outside Mosul, Iraq, March 27, 2017. Picture taken March 27, 2017. REUTERS/Youssef Bouldlal

Up to 20,000 civilians are trapped in the last ISIS group-held areas in Mosul‘s Old City, which Iraqi forces are battling to retake, a senior UN official said Thursday, July 6, according to AFP.

More than eight months since the start of the operation to retake Mosul, ISIS has gone from fully controlling the city to holding a small pocket of territory on the west bank of the Tigris River.

But the fighting against the last ISIS holdouts is heavy, and civilians caught in the middle of the battle are in “extreme danger,” UN humanitarian coordinator in Iraq Lise Grande told AFP.

“Our estimate at this stage is that in the final pockets of the Old City, there could be as many as 15,000 civilians, possibly even as high as 20,000.

“The people that are still trapped inside of these pockets are in terrible condition,” facing shortages of food, she said.

“They’re in extreme danger from bombardment, from artillery crossfire. The (ISIS) fighters that are still there are still directly targeting civilians if they try and leave.”

“We exceeded our worst case scenario more than a month ago. In our very worst-case scenario, we thought that 750,000 people would flee,” Grande said.

The damage caused by the fighting in west Mosul — and the cost of addressing it — is huge.

There are “44 residential neighborhoods in western Mosul. Six are nearly completely destroyed… Twenty-two neighborhoods are moderately damaged and 16 are lightly damaged,” Grande said.

Based on a preliminary assessment, the first phase of “stabilization” in west Mosul — which includes basic services, infrastructure, housing, education and police stations — will cost $707 million.

That is nearly double the expected figure, “because the level of damage in western Mosul is far higher than what we feared it would be,” she said.

ISIS overran large areas north and west of Baghdad in 2014, but Iraqi forces backed by US-led air strikes and other support have since regained much of the ground they lost.

The recapture of Mosul will not however mark the end of the war against ISIS.

The jihadist group holds territory elsewhere in Iraq as well as in neighboring Syria, and has been able to carry out attacks in government-held areas.