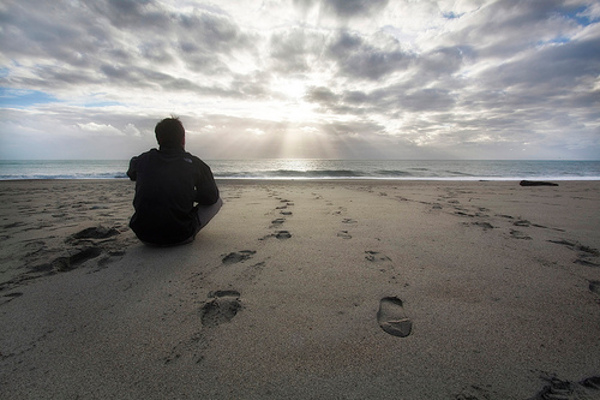 “Bury yourself in the land of anonymity. A seed that is never buried underground will never produce. There is nothing more beneficial to the heart than an isolation that allows it to enter a state of reflection.”

If we want to understand well the meaning of awe, hope, relying on God, and sincerity and want to turn this rational understanding to a heart feeling, then the way, as Ibn `Ata’illah suggests, is to reflect.

Reflection is a marvelous form of worship that pushes people in their path to God. It helps people achieve their spiritual goals. Some say that the Prophet (peace and blessings be upon him) said: “Reflection for one hour is better than worship for sixty years.” (Narrated by Al-`Iraqi with a weak chain of narrators) This is because the one who spends his time reflecting on God, His creation, His universal laws, His religion, and His legislation, is really converting the mere rational information to sincere conditions and spiritual lights.

(Verily, in the creation of the heavens and the earth, and in the succession of night and day, there are indeed messages for all who are endowed with insight, [and] who remember God when they stand, and when they sit, and when they lie down to sleep, and [thus] reflect on the creation of the heavens and the earth: “O our Sustainer! You have not created this without meaning and purpose. Limitless are You in Your glory! Keep us safe, then, from suffering through fire!) (Aal `Imran 3:190-191)

Those who are endowed with insight reflect on the creation of the heavens and earth and on the day and the night based on the knowledge and information they know about the universe. Many people possess such information in their minds only without reaching their hearts. On the other hand, those who reflect on the universe calling to their minds the Creator of the universe, or reflect on the heavens and the earth calling to their minds the Maker of the heavens and the earth, their reflection will eventually lead them to admit in their hearts “You have not created this without meaning and purpose.” Reflection will make them stand in awe of God, therefore they pray to God: (Keep us safe, then, from suffering through fire!). Thus reflection has a significant influence on the heart. God says: (Only such as are endowed with [innate] knowledge stand [truly] in awe of God: [for they alone comprehend that.]) (Fatir 35:28)

In this word of wisdom Ibn `Ata’illah points to another concept that supports the concept of reflection that is of anonymity and isolation. This concept is one of the concepts that many people misunderstand and take them away from the true objectives of religion and the spirit of Islam.

By the Arabic word khumul, Ibn `Ata’illah does not mean laziness, however he means the state of obscurity from fame. This state is achieved when one isolates himself from people. This isolation is for a limited period. What is not conformable with the isolation Ibn `Ata’illah is talking about is to isolate yourself from the world for a long time without any kind of interaction. This is against the teachings of Islam. The Prophet is reported to have said: “There is no monasticism in Islam.”; and he said, “The Muslim who interacts with people and is patient when they harm him is better than a Muslim who doesn’t mingle and is not patient when people harm him.” (Authenticated by Al-Albani)

Therefore, a Muslim interacts with people, works, gets married, visits his relatives and his neighbors, enjoins good and forbids evil, befriend people, etc.

Then, what does Ibn `Ata’illah mean by “isolation”? Is there evidence in the Prophetic tradition to support it? Or is it an innovation?

The clear origin of isolation, in addition to the Prophet’s isolation in the cave of Hiraa’ before and after the Revelation, is the Prophet’s staying in the mosque to worship God during the month of Ramadan and during other months.

Abu Hurairah (may God be pleased with him) reported that the Prophet used to perform I`tikaf (staying in the mosque to worship God) every year in the month of Ramadan for ten days, and when it was the year of his death, he stayed in the mosque for twenty days.

Ibn `Ata’illah makes a connection between this Prophetic tradition and a divine law which states that every plant or animal or even human being that is expected to grow and produce should be buried in the darkness and grow away from external factors.

Temporary isolation from the creation has other benefits. One benefit is that it helps one to avoid committing sins. This is because most sins are the result of mingling with people. He who is alone does not commit sins.

Another benefit of isolation is that it trains the servant to protect his tongue against its destructive vices. God says: (However, man is, above all else, always given to contention.) (Al-Kahf 18:54)

Isolation also trains the servant to purify his intention to God because he will not occupy himself with how people look at him and what they will say about him. Though showing off may find its way to one’s heart even if he is alone when one occupies himself with how people think about him. Therefore, Ibn `Ata’illah says elsewhere: “Perhaps showing off in good works has entered upon you from where people do not see you.” At any rate, isolation involves a kind of training on how to make the intention purely for God and how to forget the people around you and how they think about it positively or negatively.

If the servant looks for what benefits his heart, he will make progress in his spiritual journey to God. Sometimes we forget the work of the heart and focus on the work of the organs. This hardens the heart and leads to forgetfulness, and puts some obstacles and difficulties in the course of one’s journey to God. However, temporary isolation from the people and reflection on God help one reach his destination quickly. There is nothing more beneficial to the heart than an isolation that allows it to enter a state of reflection.