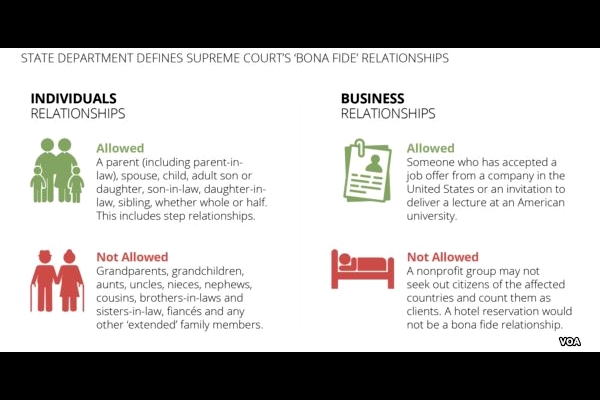 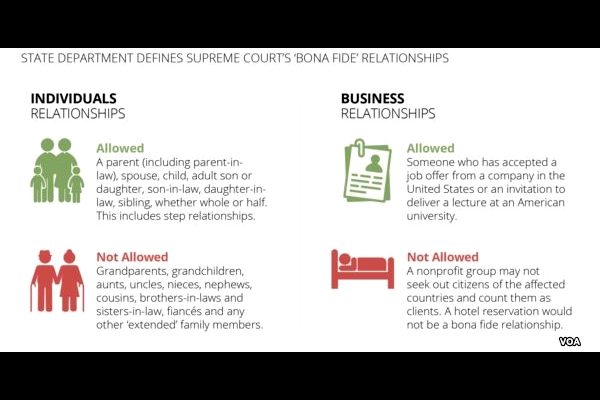 The United States is set to implement new rules requiring visa applicants from six majority-Muslim nations to have a close relationship with a family member or business in the U.S. in order to be eligible to be admitted to the country.

A State Department cable seen by the Associated Press and Reuters late Wednesday, but not made public, outlined how consular officials should proceed with the visa applications for people from Iran, Libya, Somalia, Sudan, Syria and Yemen.

The acceptable close family relationships include a parent, spouse, child, adult son or daughter, son-in-law, daughter-in-law or sibling who is already in the United States.

Relationships that do not meet the requirement include grandparent, grandchild, aunt, uncle, niece, nephew, cousin, brother-in-law, sister-in-law, fiancee or other extended family.

An acceptable business relationship has to be “formal, documented,” and not created for the purpose of evading the travel ban. The cable said something like a hotel reservation would not meet the requirement.

The Associated Press said the new rules were due to go into effect at 8 p.m. Washington time Thursday (0000 GMT Friday).

The guidance comes days after the Supreme Court partially reinstated a travel ban ordered by President Donald Trump that had been held up by lower courts on the grounds that it is unconstitutional. The court will hold its own hearing on the legal challenges in October.

In their decision announced Monday, the justices said only visitors who can prove they have a “bona fide relationship” in the United States could be admitted, but did not give a definition of what an acceptable relationship was in terms of who should be exempt from the ban.

The Department of Homeland Security assured travelers Wednesday they will not see any of the chaos that ensued when the travel ban was first introduced in March. It promised to implement the revised ban “professionally with clear and sufficient public notice.”

Some U.S. immigration lawyers say many of their clients from the six affected countries are still filled with uncertainty. A number of attorneys plan to set themselves up at international airports ready to offer help, reminiscent of what happened when the original executive order was put in place barring issuance of new visas for 90 days.

The first version of the ban Trump signed included Iraq among the prohibited countries, but a revised version dropped the country. The revised order also dropped an indefinite ban on Syrian refugee admissions, leaving in place a 120-day freeze on entry to all refugees.

Trump says the order is necessary to protect national security, with the entry freezes meant to give the government time to strengthen vetting procedures.

Federal courts in Hawaii and Maryland have ruled the ban targeted Muslims and violated the U.S. Constitution prohibition on religious discrimination.

Before the Supreme Court ruling this week, those courts both at the district and appeals level had barred the government from enforcing Trump’s executive order.