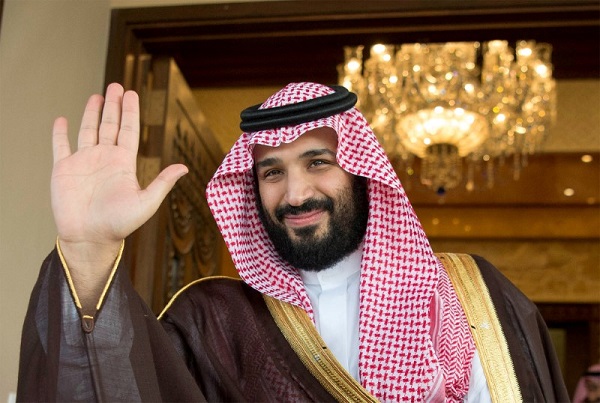 By: Stephen Kalin and William Maclean

DUBAI (Reuters) – Saudi Arabia’s King Salman made his son next in line to the throne on Wednesday, handing the 31-year-old sweeping powers as the kingdom seeks radical overhaul of its oil-dependent economy and faces mounting tensions with regional rival Iran.

Although Mohammed bin Salman’s promotion to crown prince was expected among those who follow the royal family closely, the timing was a surprise, putting the kingdom’s future in relatively untested hands.

He replaces his cousin, Prince Mohammed bin Nayef, a veteran security chief who led the Saudi campaign against ISIS and al Qaeda at a time when Riyadh faces heightened tensions with Qatar and Iran and is locked into a war in Yemen.

“The elevation of Mohammad Bin Salman to the Crown Prince  will likely mean minimal change to oil production policy but could bring more aggressive foreign policy moves that bring back the political risk premium,” said a research note by RBC Capital Markets, LLC.

The young prince is often charming in person, but analysts say his rapid rise has also created friction within the ruling family and made Saudi policy less predictable than in recent decades.

A favorite son of his elderly father, his youth and dynamism have also appealed to many younger Saudis, who constitute the biggest proportion of society and are often eager for change.

The previous crown prince, Mohammed bin Nayef, the king’s nephew and a counter-terrorism chief admired in Washington for putting down an al Qaeda campaign of bombings in 2003-06, was relieved of all his posts, according to the decree.

The royal decree said the decision by King Salman to promote his son and consolidate his power was endorsed by 31 out of 34 members of the Allegiance Council, made up of senior members of the ruling Al Saud family.

Intent on dispelling speculation of internal divisions in the ruling dynasty, Saudi television was quick to show that the change in succession was amicable and supported by the family.

Throughout the early morning it aired footage of Mohammed bin Nayef pledging allegiance to the younger Mohammed bin Salman, who knelt and kissed his cousin’s hand.

Analysts said the change ends uncertainty over succession and empowers Prince Mohammed bin Salman to move faster with his plan to reduce the kingdom’s dependence on oil, which includes the partial privatization of state oil company Aramco.

“The change is a huge boost to the economic reform program… Prince Mohammed bin Salman (MbS) is its architect,” said John Sfakianakis, director of the Gulf Research Center.

Bernard Haykel, professor of Near Eastern Studies at Princeton, said the king’s decision was aimed at avoiding a power struggle between his son and Mohammed bin Nayef by setting the line of succession out clearly.

“It’s clearly a transition that has happened smoothly and bloodlessly. Now it’s clear, it’s straightforward. That kind of clarity lowers the risk. There’s no question as to who’s going to be in charge.”

“Some people were predicting that this would lead to a division in the family and strife and some kind of revolt. I don’t see that happening,” Haykel said.

Iran’s leadership was critical of comments by Prince Mohammed last month that the “battle” should be taken into Iran, with Supreme Leader Ayatollah Ali Khamenei labeling the Saudi leadership then as “idiots”.

The royal decree did not nominate a new deputy crown prince. The position is relatively new in Saudi Arabia, where kings have traditionally chosen their own successors.

In an apparent attempt to appease the family, the decree had a clause that made clear that Mohammed bin Salman won’t be allowed to appoint one of his own sons as his successor.

It also appointed young princes from other branches of the family to government roles, seemingly to reassure them that they will remain part of the ruling structure.

As deputy crown prince, Mohammed bin Salman has been  responsible for running Saudi Arabia’s war in Yemen, dictating an energy policy with global implications and spearheading plans for the kingdom to build an economic future after oil.

POWER BEHIND THE THRONE

Until his father Salman bin Abdulaziz Al Saud became Saudi Arabia’s seventh king in January 2015, few people outside the kingdom had ever heard of Prince Mohammed.

He is currently defense minister, giving him command of one of the world’s biggest arms budgets and making him ultimately responsible for Saudi Arabia’s military adventure in Yemen.

Prince Mohammed chairs the supreme board of Aramco, making him the first member of the ruling family to directly oversee the state oil company, long regarded as the preserve of commoner technocrats.

But perhaps most importantly, he is the gatekeeper to his father, King Salman, who in Saudi Arabia’s absolute monarchy retains the final say in any major decision of state.

Outside Saudi Arabia, that rapid advance and the sudden changes to longstanding policies on regional affairs, energy and its economy have prompted unease, adding an unpredictable edge to a kingdom that allies long regarded as a known quantity.

Inside, they have prompted admiration among many younger Saudis who regard his ascent as evidence that their generation is taking a central place in running a country whose patriarchal traditions have for decades made power the province of the old.