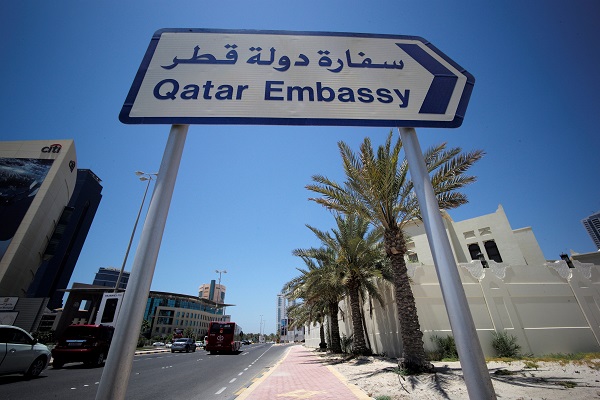 A sign indicating a route to Qatar embassy is seen in Manama, Bahrain, June 5, 2017. REUTERS/Hamad I Mohammed

Iran has sent at least four cargo planes of food and will continue to send more to Qatar after its biggest suppliers cut ties with the import-dependent country, according to Iran Air spokesman Shahrokh Noushabadi.

Turkey has also said it would contribute food to Qatar amid fears of a food shortage after Saudi Arabia sealed Qatar’s only land border, through which it imported most of its food.

In a bid to rebut these accusations, Qatar is paying $2.5 million to the firm of John Ashcroft, who served as U.S. Attorney General during the September 11th attacks, to audit its efforts at stopping terrorism funding.

Ashcroft is expected to personally lead his Washington-based firm’s efforts “to evaluate, verify and as necessary, strengthen the client’s anti-money laundering and counterterrorism financing” compliance, according to documents filed with the Department of Justice.

U.S. Secretary of State Rex Tillerson spoke on the phone late Saturday with Turkish Foreign Minister Mevlut Cavusoglu about the dispute between Qatar and its Arab Gulf neighbors.

Tillerson urged Saudi Arabia and other Gulf states Friday to “no further escalate” the crisis and ease their blockade of Qatar, which he said was causing unintended humanitarian consequences and affecting the U.S.-led fight against Islamic State.

In reference to Tillerson’s comments on the blockade, Turkish President Recep Tayyip Erdogan said Friday in Istanbul it “should be lifted completely.”

“Tonight, U.S. Secretary of State [Rex] Tillerson made a statement,” he said. “He had a statement about easing the process and reducing the sanctions [against Qatar]. I say let us lift it entirely. This should not be happening between brothers.”

Speaking at a Ramadan fast-breaking dinner, Erdogan vowed to continue supporting Qatar after his rapid approval of legislation on deploying Turkish troops there.