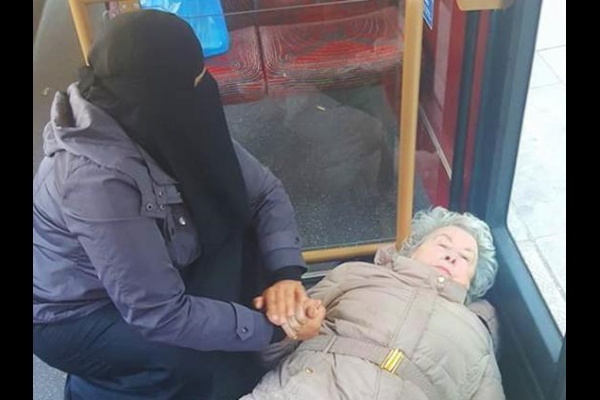 A photo of a Muslim woman holding the hand of an old lady who fell down on a bus has racked up tens of thousands of shares on social media.

The unnamed woman was travelling on the E17 bus in East London, when an 84-year-old lady collapsed and got her head stuck between the door and a metal pole.

Hamza O Bakri, who had taken the photo and witnessed what happened, recounted the incident on his Facebook page.

“An 84 years old lady just got her head stuck between the door and metal pole on El1 bus from Ilford to barking, and the Muslim lady holding her hand and supporting her for 20 minutes till the ambulance to arrive.

“This is the real Islam,” he continued.

One user wrote: “I think people of the UK should seriously wake up, it’s not religion that causes war, it’s politics and the d******s we as a nation vote for, I just hope that the lady who is injured is recovering bless her.”

Bethany Roberts wrote: “People need to realise that the terrorists are not Muslim… real Muslims are actually such a lovely community of people.”

According to Hamza, the bus driver had driven over a “drain” which caused the vehicle to briefly sway, and made the old lady fall.

The number of racist incidents recorded three days after the attack was 54, a 40 per cent increase from the daily average of 38 the same time last year.

He encouraged members of the public to report hate crimes to the police.