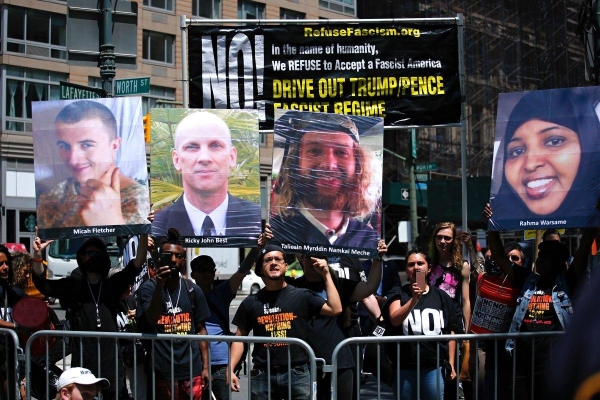 Anti-Muslim protesters marching in Lower Manhattan Saturday were met by a larger group of counter-protesters who drowned them out with chants of their own.

The two sides squared off in Foley Square, where ACT for America, a lobbying organization opposed to Muslim immigration, organized a “March against sharia” – part of a series of nationwide marches the group organized Saturday.

About 100 demonstrators carrying signs with anti-Islamic slogans — one reading simply “NO MORE MUSLIMS” — shouted against Sharia law, which ACT for America argues is threatening the United States. The organization is designated by the Southern Poverty Law Center as an anti-Muslim hate group.

On its website, the group wrote: “Sharia is incompatible with Western democracy and the freedoms it affords” and that ACT is “committed to protecting women and children from sharia law,” which it described as “including honor killing and female genital mutilation.”

But Islamic scholars say sharia law does not include those things and is instead a way of life as outlined in various religious texts.

Across Centre Street, several hundred protesters — branding themselves as anti-fascist — brought out cowbells, drums and air horns in an attempt to stop the anti-Muslim side from being heard.

“We’re making so much noise to drown out the fact that they are furthering hate speech. I do not believe they have a right to a platform. They are planning murder and mayhem,” said Eric Josephson, 66, a retired union organizer from the Bronx.

“This is to attempt to push back against Nazis and other extreme right wingers, who are apparently protesting against a movement to impose sharia law in the U.S. This is obvious horse manure. There is no such movement.”

A man even collapsed at the anti-sharia rally and was loaded into an ambulance after EMTs performed CPR and applied defibrillators. The man was identified by other participants as Frank Morganthaler, one of the event organizers and a member of the group Oath Keepers. His condition was not immediately known.

The rally continued as first responders assisted him.

The opposing sides shouted and made obscene gestures. Tensions rose when counter-protesters crossed the street to meet the anti-Sharia group, tossing jugs of rotten milk across the barrier that separated them.

Later, the sides clashed violently in City Hall Park as the crowd began to disperse, as punches were thrown.

Gary Gone, 63, of the Bronx, said the protest had “nothing to do with religion or nothing like that” — but about resisting sharia law and taking the country back.

“We’re not going to take on sharia law in this country. If they don’t like it they can go back to their countries and deal with it there,” he said. “What comes out of this is a show of force that Americans are standing up for their country. That’s what it’s about — showing force for our country.”