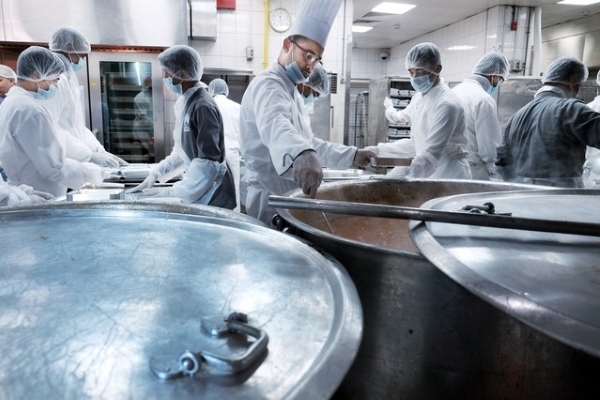 ABU DHABI // Ramadan is a time for reflection, so spare a thought for the army of unsung heroes who make up to 35,000 iftar meals every day. About 1,000 people work around the clock at a two-storey kitchen to produce the free iftar meals for the legions of worshippers who break their fast at Sheikh Zayed Grand Mosque each evening during the holy month.

The task they face is mind-boggling, but 350 chefs, 160 stewards and 450 service staff – including purchasing, store, hygiene and safety – go about it dutifully and without the hubbub you would expect to see in a kitchen.

“It’s good teamwork and staff divided into shifts around the clock. We feel proud to work hard to deliver on time for such a grand iftar,” said Karsten Gottschalk, executive chef at the Armed Forces Officers Club and Hotel in Abu Dhabi.

The club is where the cooking takes place before the thousands of meals are taken over to the nearby mosque.

On average, 30,000 meals are produced each day, although this increases to as many as 35,000 on weekends. So many meals require a lot of ingredients – measured in tonnes.

The preparation begins three months in advance and requires planning and dedication.

“Everyone sleeps well and comes back fresh to give 100 per cent,” said Mr Gottschalk, who is from Germany.

“For over a decade we have learnt a lot from mistakes we made and modernised the kitchen with better equipment.

“In the evening we get the number of meal orders we need to prepare for the next day.”

On entering the kitchen, one faces a scene reminiscent of an action-packed production line, where people work on individual tasks, such as frying, chopping, washing, mixing and packaging. One worker had the unenviable task of cutting 50kg of onions, although thankfully he had a machine to assist him.

The outcome is thousands of complete iftar meals, each of which contains biryani, curry, water, an energy drink, apple, dates, juice, yogurt, laban and salad.

Biryani and vegetable curry are cooked in bowls, each of which has a capacity to produce 1,200 meal portions. A a team of 10 people then line-up to package the end product.

Twelve temperature-controlled lorries then take the meals to the mosque.

“High temperatures are the key challenge for us,” said Mr Gottschalk, who has worked at the club for five years.

“We have to keep everything under refrigeration – hot and cold – and we keep monitoring the temperature until it reaches the guest to eat.”

George Gebrayel, another executive chef at the club, said practice had helped them to achieve perfection.

“We have been delivering iftar meals since 2004 and each year we improve,” he said. “For the day’s delivery, the work starts at 4am and finishes within five hours, then packaging starts. The temperature-controlled trucks deliver all iftar meals at the mosque by 3pm.”

From 5pm iftar meal distribution begins at 13 air-conditioned tents, which can each accommodate about 1,000 to 1,500 people, and still that is not enough, with people spilling over on to carpets in the mosque gardens.