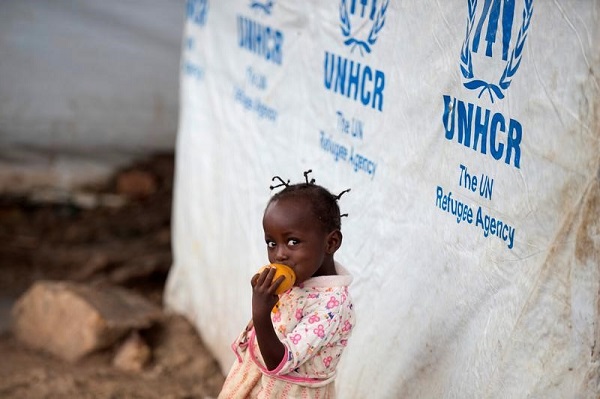 A girl eats a mango at a shelter for displaced people in Bangui, Central African Republic, April 24, 2017. REUTERS/Baz Ratner - RTS13QLD

DAKAR (Thomson Reuters Foundation) – The world pays the least attention to humanitarian crises when they force Africans from their homes, dashing hopes of peace, hindering reconstruction and increasing the risk of radicalisation, an aid agency said on Thursday.

It was followed by the Democratic Republic of Congo, Sudan, South Sudan, Nigeria, Yemen, the Palestinian territories, Ukraine, Myanmar and Somalia.

“The fact that most of these people do not turn up at our doorsteps gives us no right to close our eyes to their suffering, and does not remove our responsibility to assist,” the NRC’s Secretary General Jan Egeland said in a statement.

“Economic support to alleviate humanitarian crises must be given based on needs, and not … geopolitical interests.”

Limited political will to achieve peace, scant media attention and a lack of aid funding mean crises are likely to worsen and trigger even more displacement, the NRC said.

Chronic conflict involving militias in countries such as Central African Republic and Congo could drive more and more people into armed groups, said Richard Skretteberg of the NRC.

“When you combine limited state presence in much of these countries, mass displacement, and a lack of protection and aid for civilians, this creates a fertile breeding ground for radicalisation,” he told the Thomson Reuters Foundation.

“Rebuilding and working towards peace are difficult when so many people are displaced,” the NRC senior adviser added.

One in five Central Africans – about a million people – is displaced, and at least 100,000 were newly uprooted last month in some of the worst violence between the mainly Muslim Seleka rebels and Christian militias since conflict began in 2013.

Spreading ethnic violence in Congo has forced more than 1.5 million people to flee their homes within the country this year – more than triple the number uprooted within Syria and five times the number within Iraq, according to the NRC.

The United Nations has received just a fifth of the $812.5 million sought in the humanitarian appeal for Congo this year, and 25 percent of the $400 million requested for Central African Republic, the U.N.’s Financial Tracking Service (FTS) shows.

Africa’s arid Sahel belt, which stretches from Senegal to Eritrea and lies south of the Sahara desert, topped the NRC’s index last year, followed by Yemen and Libya.