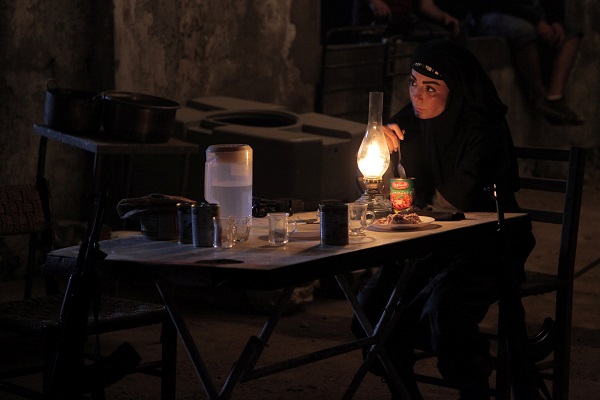 Actress Dima Al Jundi performs in a scene from 'Black Crows' series, believed to be filmed in Lebanon, April 29, 2016. MBC Group/Handout via REUTERS

By: Tarek Fahmy and Noah Browning

DUBAI, June 1 (Reuters) – A Saudi-owned television channel has launched a drama series portraying the brutality of life under the ISIS to counter sleek propaganda from the jihadist group which has won it recruits worldwide.

Beamed across the Arab world by satellite channel MBC, the $10-million project reflects the kingdom’s self-appointed role at the forefront of a Muslim bulwark against extremism which was underlined in a May 20-21 visit by U.S. President Donald Trump.

“Black Crows” shows women and children living under the jihadists and is the first television drama to tackle subjects such as mass murder and rape, contrasting sharply with the idyll of heroism and holy war projected by ISIS on social media.

“The main audience we target, the most important and dangerous, are those who are prone to support and even join terrorist organizations,” MBC spokesman Mazen Hayek told Reuters in an interview.

“Media is part of their (ISIS) offensive strategy. Thus media organizations have the right, actually the duty, to face such an offensive – which is well-funded and on the internet and social media – with this series,” he said.

Actors and MBC staff have told local media they received death threats online from ISIS supporters because of the show.

Filmed in Lebanon, the more-than-20-part series that started on Saturday follows the widow of an ISIS commander turned leader of a women’s morality police force. There are scenes of gutted homes, mass graves, big explosions and gunmen waving black flags.

Plot-lines include women from the Yazidi religion being captured and forced into sex slavery, child-soldiers and a woman with a forlorn love-life moving to territory held by the group to become a “jihadi bride”.

Since ISIS launched its lightning offensive across Iraq and Syria staging beheadings and releasing carefully crafted films to draw in new recruits, Arab and Western governments have sought to counter their message.

“The media alone is not enough, we need religious institutes, clerics and mosques to work with the media in combating radicalism,” said Najat AlSaeed, a Saudi analyst who has written a book on Arab satellite TV.

“There is progress, but it’s slow and is not enough for the reformists or the global community.”

The show will aim to reach a big audience of Muslim viewers as they break their fast in the evening for the holy month of Ramadan – a prime season for TV dramas. MBC together with its sister entertainment and movie channels are the most watched network in the Arab world.

However, Syrian actress Dima Al Jundi who plays the morality enforcer says only art can convey the depth of human suffering the group has wrought in a way viewers need to see.

“If you open YouTube, you’ll find videos of murder or suicide bombings. But the details of their daily life, how they recruit kids, how they abuse women – this you wouldn’t know.”

Saudi Arabia follows the ultra-conservative Wahhabi school of Sunni Islam, but sees the Islamist militants as posing a threat to its own stability. ISIS denounces the al Saud family as ungodly rulers for their alliance with the United States and has staged attacks in the country.

Senior Wahhabi clerics, whose influence in Saudi society forms part of a covenant with the royal family dating to the kingdom’s founding 250 years ago, endorse execution by beheading for offences that include apostasy, adultery and sorcery, oppose women driving or working and describe Shi’ites as heretics.

The clerics sharply differ, however, from al Qaeda and ISIS militants in opposing violent revolt against the government.

Saudi Arabia crushed a campaign of al Qaeda attacks in 2003-06 but has been hit by ISIS bombings in the past two years. Saudi security police closely monitor Saudis with suspected connections to militants and have detained more than 15,000 suspects in the years since al Qaeda’s campaign.