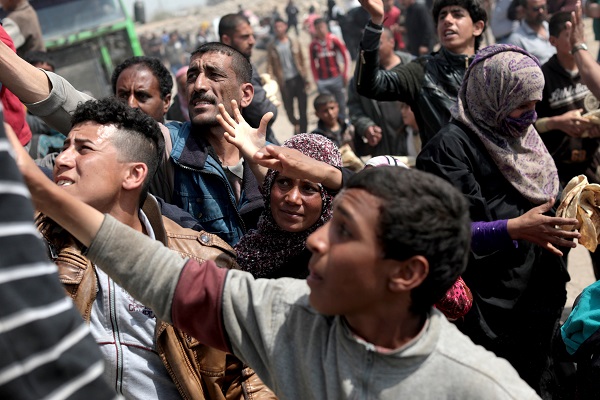 Displaced Iraqis try to get food during a delivery outside of Hammam al-Alil camp in the south of Mosul, Iraq, March 29, 2017. REUTERS/Andres Martinez Casares

Lise Grande told the BBC residents were in grave danger as ISIS was directly targeting families.

Many people in the city are already facing severe shortages of water and electricity.

Troops have been trying to drive ISIS fighters out of the last remaining strongholds they control in Mosul’s Old City.

Hundreds of thousands of civilians have fled the northern city since the offensive to reclaim it was launched in October last year.

Federal Police snipers covered us as we moved forward, heading to the frontline. Gunfire echoed around the streets. Every few minutes, a mortar exploded nearby.

Soon the streets were too dangerous, so we moved from house to house through holes in the walls.

“There are still many civilians there, most of them hiding in their basements and running out of food.”

“They won’t give up on this mosque,” Major Ali said.

“They will fight till they die and will use civilians in every way they can to slow us down.”

The government announced the recapture of eastern Mosul in January but the fight for complete control of the western half continues.

Earlier this month, coalition officials estimated the number of militants in Mosul to be fewer than 1,000 – compared with 3,500 to 6,000 militants in and around the city before the offensive began last October.

The UN has said the battle has left more than 8,000 civilians dead or wounded, but that figure only comprises people transferred to medical facilities.

Iraq’s military does not release casualty figures, but US Gen Joseph Votel told a Congressional hearing at the end of March that at least 774 Iraqi security personnel had been killed and 4,600 wounded.

More than 580,000 civilians have also been displaced by the fighting, among them 419,000 from western Mosul, the Iraqi authorities say.