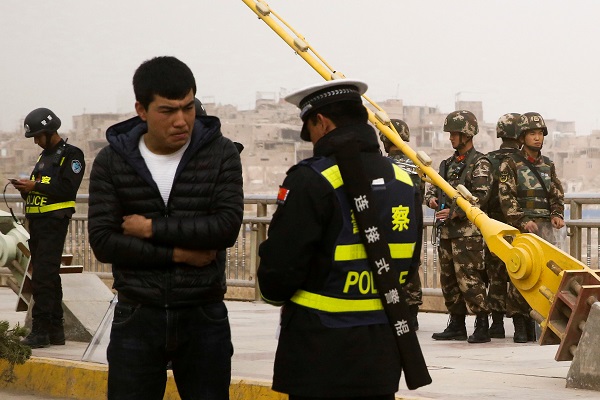 Ethnic Muslim Uyghurs in northwest China’s Xinjiang region are being given mandatory health examinations that include DNA collection, according to residents, causing concern among some observers who have called on Beijing to explain its motive behind the mass checkups.

According to reports by China’s state media, the “General People’s Health Examination Project” that began in September 2016 and ended in March this year provided checkups for 17.5 million people throughout the region, including 9.2 million in predominantly Uyghur-populated southern Xinjiang.

The examinations were carried out on more than 90 percent of the residents of the entire region, and more than 98 percent of the population of southern Xinjiang, the reports said, adding that the project had been “100 percent implemented” in Hotan (in Chinese, Hetian)—a prefecture almost exclusively inhabited by Uyghurs.

Official reports said patients were divided into categories by age—infants to six-year-olds, seven to 14-year-olds, 15 to 65-year-olds, and 65-year-olds and above—and given a battery of tests that included examinations of the heart, blood, DNA, urine, and blood sugar using electrocardiograms, x-rays, and ultrasounds.

Uyghur residents recently told RFA’s Uyghur Service that they were pressured and, in some cases, “forced” to undergo examinations, and that the results of their tests were stored on a computer system during the checkup.

A Uyghur official from southern Xinjiang, who spoke to RFA on condition of anonymity, said all of the staff in her department were required to participate in the examination, while her husband’s examination was arranged by his work unit and her children’s checkups through their schools.

“When they filled out the forms for the checkup, our ethnicity had to be listed clearly, as well as our religious affiliation,” she said, adding that her work unit had completed the paperwork for her.

“However, they never showed us the results [of the tests]. I don’t know if people have been demanding the results or not.”

A female college student in Hotan, who also asked not to be named, said she was “required” to undergo an examination in December last year, along with all of the other students in her school.

“They conducted the examination, but didn’t give us the results—they just said ‘you are healthy’ and that was it,” she said.

“They took blood, checked our lungs and hearts. They took blood from our arms and said if there was anything wrong they would inform us, but they never did.”

The student said that four other members of her family eventually underwent examinations, including her father, mother, and two brothers.

A farmer from Payziwat (Gashi) county in Kashgar (Kashi) prefecture told RFA that county officials and medical personnel had set up a health checkpoint in front of the area hospital, and local cadres “urged” residents to get examined.

The farmer said that he and his wife and three children were happy to receive free checkups, but added that he was puzzled over what he called a “special focus on women” during the examination, without providing further details.

A nurse from the Central Hospital of Uchturpan’s Zawa township told RFA that a lack of medical personnel had kept her examining the area’s large number of residents non-stop through March to meet the project’s deadline.

When asked for the reason behind requiring all of the residents of the region to undergo health examinations, a Han Chinese official at the Party Committee of Guma county told RFA nobody at his level knew.

“Ask the county government,” he said. “All we did was implement the order that came from the top to examine everyone.”

Observers from the overseas Uyghur exile community told RFA that while free health examinations could benefit inhabitants of the region who might not otherwise have access to health care, the vast expenditure and mobilization of resources, as well as the forced nature of the checkups, raised serious questions about the program.

“Such a large-scale collection of Uyghur biological information by the Chinese government threatens the very security of the Uyghur people and the survival of the Uyghur race.”

Tohti called on the United Nations’ World Health Organization to request an explanation from the Chinese government regarding the reason behind its examination project.

Earlier this week, rights groups and academics said Chinese authorities in Xinjiang are carrying out mass collection of DNA from individuals not suspected of any crime, with New York-based Human Rights Watch (HRW) noting that police had already gathered samples from 44 million individuals on a nationwide database, collected without oversight, transparency, or privacy protections.

“Authorities have stated that the DNA databases are used for solving crimes, including terrorism and child trafficking, as well as to identify bodies and vagrants,” the group said.

Chinese police in Xinjiang have required all passport applicants to submit DNA samples since November 2016, while police agencies have issued multimillion dollar tenders for the supply of gene sequencing equipment, HRW said.

Dilxat Raxit, spokesman for the exile group World Uyghur Congress, called the policy part of an overall policy of ethnic profiling of Uyghurs by the Chinese government.

China regularly conducts “strike hard” campaigns in Xinjiang, including police raids on Uyghur households, restrictions on Islamic practices, and curbs on the culture and language of the Uyghur people, including videos and other material.

While China blames some Uyghurs for “terrorist” attacks, experts outside China say Beijing has exaggerated the threat from the Uyghurs and that repressive domestic policies are responsible for an upsurge in violence there that has left hundreds dead since 2009.