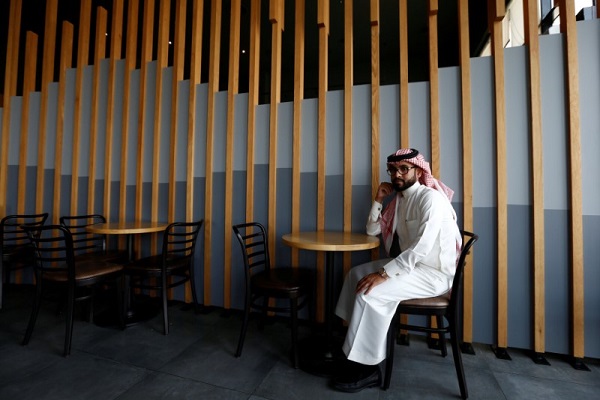 Nayef al-Hayzan, 28, poses for a photograph at a cafe in Riyadh, Saudi Arabia, May 15, 2017. REUTERS/Faisal Al Nasser

In much of the region, authoritarian governments duel for power with political Islamists and militants as rival creeds and ethnic groups vie for dominance.

Yemen, Syria, Libya and Iraq are riven by wars. Israel and the Palestinians are still locked in their decades-old struggle, while Bahrain rumbles with unrest.

All 50 Muslim states whose leaders Trump will meet in the Saudi capital Riyadh are menaced by the rise of Islamic State, also known as ISIS or Daesh. He has promised to rid the world of the scourge of “radical Islamic terrorism”.

Attitudes toward Trump are colored by the actions of his first four months in power. Among them: his attempt to ban citizens of six mostly-Muslim countries from traveling to the United States; his decision to launch cruise missiles against a Syrian airbase to punish Damascus for a chemical weapons attack; and his decision to arm Kurdish militias fighting IS in Syria.

In short interviews, residents of the Middle East from all walks of life tell Reuters what they expect of Trump.

“What matters to me was one very negative decision – his refusal to allow the Syrians to immigrate to America in a racist way, because traveling to it was a dream for me to fulfill my ambitions to study and work.”

“The plan to arm the YPG is a decision taken late. We have experienced many heavy battles. If this support was happening in the first place, the advances would have been quicker. We would not have to sacrifice many lives.

“Now I’m wounded, I’ve lost two legs, but rather than aching because of my pain, I’m worried for my people. This must end, no one else should be in pain. There must be free and peaceful life in this country.”

“He is a hero. He got Daesh out of Iraq. He is cooperative with the Iraqi people and we and the Americans are one nation. We are brothers.”

“I think the core policy of Trump is focusing on eliminating terrorism and drying out its financial sources in the world and curbing the terror-supporting states, especially those neighboring Iraq.

“The impact of Trump’s policy on the future of the Middle East will hold positive elements. For example, Iraq suffered a lot from the policy of the former American administrations which led to the spread of chaos and finally to the emergence of Daesh.”

“Trump should take speedy decisions, and for Kurds, they are oppressed and America has the right to arm them and support them militarily and financially. America must help Kurds not only in Syria but in all Kurdish areas.”

“Trump’s policies will lead us either to a world war with the Middle East as its center stage or toward a compromise between all the conflicting powers based on dividing our countries and changing the boundaries determined by the Sykes-Picot agreement (between Britain and France in 1916).”

“I do not expect any change in American policies toward the region, especially since President Trump is committed to moving the U.S. embassy to Jerusalem and there is no intention to pressure Israel.

“He will be like all previous presidents who came before him with bias and abiding by Israeli interests.”

“President Trump has promised to dramatically change America’s stance in the Middle East most notably by scrapping the Iran nuclear agreement, getting involved to eradicate terrorists in ISIS … and to negotiate a peace agreement between the Israelis and Palestinians.

“All of these are common promises and rhetoric outlined by most U.S. candidates and previous presidents. However, this is all easier said than done.”

“When Trump took office as president of the U.S., he issued an order preventing some Arab and Muslim nationalities from entering, causing tension in the region.

“His policy in Syria is not clear. Arming the Kurds is not right from my perspective. This will also drive Turkey to launch attacks towards Kurds.”

“Trump’s policy is aimed at deepening the differences between Muslims and Christians. This will have a very bad impact and will lead to the continuation of hostility.”

Anonymous female fighter from the Democratic Front for the Liberation of Palestine (DFLP), southern Gaza Strip

“Trump is a man of war, he works on spreading war, chaos and killing among people. Like other presidents who came before him, I do not see he will bring about peace or any good to the Palestinian people.

“I see that there is another war coming.”

“I expect that Trump’s visit will have a positive impact on the Saudi economy, and discussions are expected to tackle the problems in Syria and (energy giant) Aramco’s privatization in international markets and U.S. markets in particular.”

“I think Trump as a Republican president will help improve  relations with the Gulf states, especially Saudi Arabia. I do not want to commit on Trump’s policy in Syria and arming the Kurds now. Let’s wait and see what comes from his visit.”

“I think Trump is going to ruin things and make them worse than they already are throughout the whole Middle East.”

“Trump’s decision to strike at the air base was a surprise move that raised my hopes the U.S. President will take bolder decisions in future that would end President Bashar al-Assad’s rule and allow me to return home to a democratic country.”

“I see myself as a very simple person and I believe that at the end of the day, God controls everything. Therefore, it doesn’t really matter what Trump is saying or doing in the Middle East or anywhere else.

“Even if we might think people are in any sort of control or power, this is all an illusion. God is the real king.”