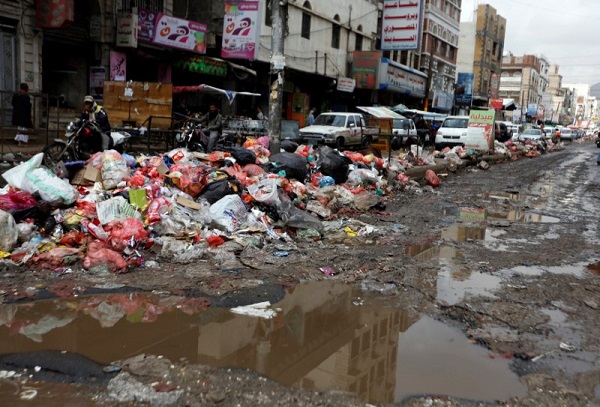 Rubbish bags pile up on a street during a strike by garbage collectors demanding delayed salaries in Sanaa, Yemen May 8, 2017. REUTERS/Khaled Abdullah

Cholera has killed 184 people in Yemen since last month, the International Committee of the Red Cross said on May 15, a day after authorities declared a state of emergency in the capital Sanaa and called for international help.

Sanaa is controlled by the armed Huthi movement, which is aligned with Iran and fighting a Saudi-led coalition.

More than 10,000 people have been killed and millions displaced in over two years of war, which has also destroyed much of the country’s infrastructure.

Only a few medical facilities are still functioning and two-thirds of the population are without access to safe drinking water, the United Nations estimates.

The Red Cross said 184 people had died from the acute diarrheal disease since April 27, and 11,000 more suspected cholera cases had been reported across the impoverished country.

Sanaa’s Health Ministry has reported more than 8,000 cholera cases, declared a state of emergency, and called on donors to help it avert an “unprecedented disaster.”

The disease can be fatal within hours if left untreated.

The World Health Organization has said that 7.6 million people in Yemen live in areas at high risk of cholera transmission.

Based on reporting by AFP and Reuters.