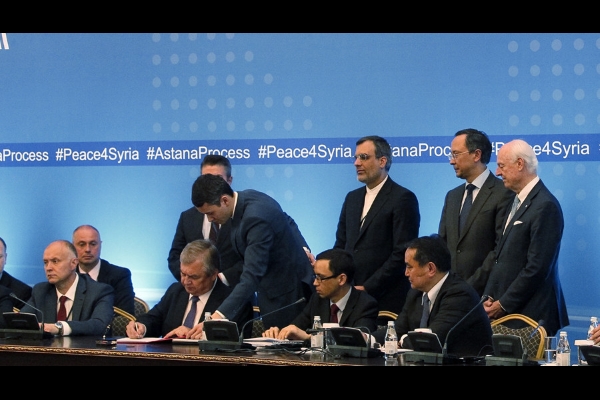 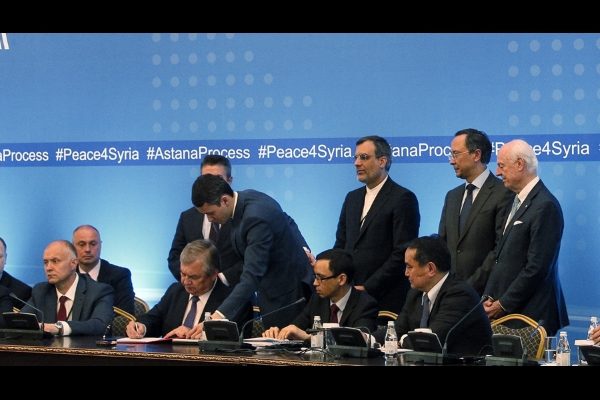 Syrian regime allies Russia and Iran and rebel supporter Turkey on Thursday, May 4 signed a memorandum on a Moscow-backed plan to create safe zones in Syria to bolster a fragile truce, AFP reports.

An AFP reporter at peace talks in the Kazakh capital Astana saw the heads of the delegations, representing the three countries sponsoring the negotiations, sign the document.

However a member of the rebel delegation left the room, shouting against regime ally Iran, the AFP reporter saw. The Syrian government and rebel delegations are not signatories.

The Kremlin has been touting a plan to create safe zones in Syria that is aimed to “further pacification and cessation of hostilities.”

“Over the past two days, the participants in the Astana talks reviewed the implementation of the ceasefire agreement and the cessation of hostilities,” Kazakhstan’s foreign minister Kairat Abdrakhmanov said of a frail truce brokered by Moscow and Ankara in December.

“As a result the guarantor countries agreed to sign a memorandum on the creation of de-escalation zones in Syria.”

An Arabic-language version of the Russian draft proposal seen by AFP calls for the creation of “de-escalation zones” in rebel-held territory in the northwestern province of Idlib, in parts of Homs province in the centre, in the south, and in the opposition enclave of Eastern Ghouta near Damascus.

The aim is to “put an immediate end to the violence” and “provide the conditions for the safe, voluntary return of refugees” as well as the immediate delivery of relief supplies and medical aid, the document said.

But issues including which countries could police any safe zones remain unclear.