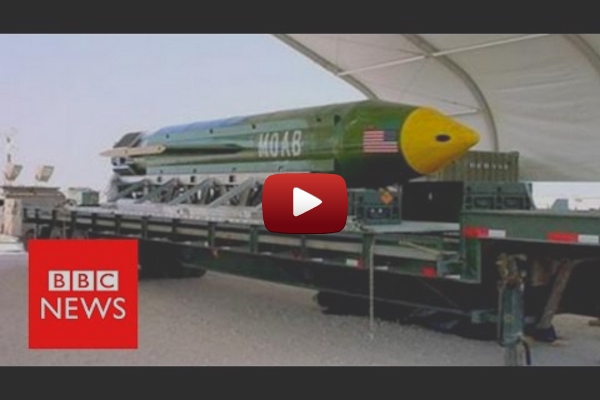 A U.S. warplane dropped the largest bomb in America’s arsenal — a 10,000-kilogram device known as “the mother of all bombs” — on an ISIS bunker complex in northeastern Afghanistan on Thursday.

Afghan defense ministry in a formal press release said the bomb killed 36 members of ISIS group and destroyed a large cache of weapons. The statement said there were no civilian casualties in this attack.

Another press release from President Ashraf Ghani’s office said the operation took place in coordination with the Afghan Security and Defense Forces. It added that the Afghan forces are also collaborating with NATO’s Resolute Support mission to fight against other terrorist groups.

The Massive Ordnance Air Blast (MOAB) bomb, developed more than a decade ago, had never been used in combat. A spokesman for Nangarhar’s governor, Attaullah Khoghyani, told VOA that local officials had not been told of the bomb plans in advance.

He dodged a question about the mission’s goal, but hinted it may have been intended to send a forceful message to North Korea, which is rumored to be planning another nuclear weapons test shortly.

“I don’t know if this sends a message [to North Korea]. It doesn’t make any difference if it does or not,” Trump told reporters Thursday at the White House. “North Korea is a problem. The problem will be taken care of.”

The Pentagon said in a statement that a GBU-43 bomb — its formal military designation — was dropped earlier in the day on an ISIS tunnel complex in the Achin district of Nangarhar province, near the border with Pakistan.

Pentagon spokesman Adam Stump said it was the first use of the 11-ton bomb in a combat situation. The “mother of all bombs” nickname is derived from the bomb’s alternate name, a Massive Ordnance Air Blast device.

“The airstrike was designed to support the efforts of the ANSF [Afghan National Security Forces] and U.S. forces as well as minimize the risk to ANSF and the U.S. forces,” Afghan President Ashraf Ghani’s office tweeted Thursday. “Precautions were taken to avoid civilian casualties with this airstrike.”

Trump said the airstrike in Afghanistan was “another successful event,” and noted, “We are so proud of our military.”

A short time earlier, White House spokesman Sean Spicer told reporters the mission against the ISIS complex was necessary because the U.S. and its allies “must deny them operational space, which we did.”

General John Nicholson, commander of U.S. forces in Afghanistan, said ISIS extremists in Afghanistan have been increasing their use of tunnels and underground bunkers to “thicken their defense,” and added: “This is the right munition to reduce these obstacles and maintain the momentum of our offensive.”

References to North Korea that arose in connection with the Afghan bombing were due to increasing tensions in the area around the reclusive communist state, since there have been signs Pyongyang is preparing to mark an important national anniversary in the coming days — possibly with a long-rumored sixth test of one of its nuclear warheads.

Meanwhile, thousands of U.S. and South Korean troops and heavy weaponry have been mobilized for their largest-ever joint military exercise.

North Korea has threatened war if it sees signs of “aggression” south of the Demilitarized Zone that divides the two Koreas. Trump has warned that the U.S. will no longer tolerate any provocative activity by Pyongyang — presumably by imposing even tougher economic sanctions, but comments by the president and other senior officials have left open the possibility of more direct confrontation.

China, North Korea’s only staunch ally, has said tension in the region cannot be de-escalated militarily and has urged Pyongyang to halt its nuclear program in exchange for Chinese protection.