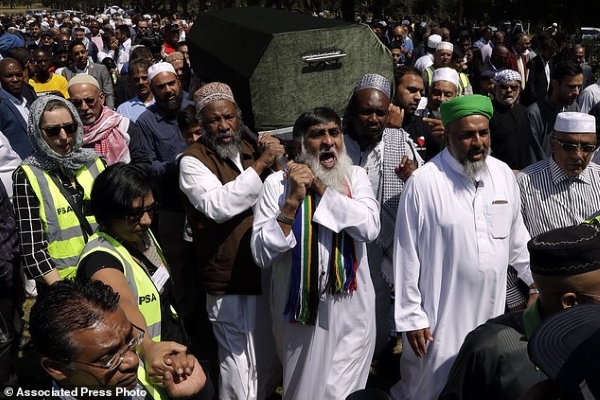 Growing up in early 90s South Africa I was not exposed to many different races, in that stifling, artificially divided environment apartheid left us with. But I was immersed in a rich religious melange that formed my understanding of community. My neighbours on my right were Hindu, on my left were Christians and opposite me were Muslims. I heard stories about Ram’s love for Sita from Mrs Moodley, about Christmas from the Davids next door and about the Prophet (PBUH) at madressah. There were at least five temples, mosques and churches in my area alone (often right next to each other) and our parks were littered with white rocks that mark Shembe outdoor prayer sites. In town, outside the bustling African traditional healer’s market was the Catholic Emmanuel Cathedral and right next door was the largest mosque in Durban, the Juma Musjid Mosque dating back to 1880.

While we may have been segregated by race, there were no clear rules about religion and it is perhaps one of the reasons that faith bound us to one another so strongly. Religion was not only a source of strength and comfort during apartheid, it was also a means of resistance against a system designed to divide. And yet religion, the one thing that has divided the rest of the world so starkly, has not done so here. This has perhaps been one of the most remarkable stories of post-apartheid South Africa, but the least told.

Despite being a secular state, South Africa is a deeply religious country – it has more than 60 religious affiliations and in 2016, the General Household Survey by StatsSA revealed that more than 90% of South Africans associate themselves with a religion while 36.6 % of Hindus, 52.5% of Christians and 75.6% of Muslims attend religious ceremonies at least once a week. While the number of South Africans who consider themselves religious may be lowering we still have a uniquely united approach to religion in a world that is steadily growing divided over it.

Thuli Madonsela, the former public protector who helped draw up the the South African Constitution, explained in an interview last year that respect for the right to choose one’s faith and the state’s respect for all faiths is how a secular democracy and a religious population work together so well in South Africa.

This is especially pertinent today in a world where Islam and its communities have come under scrutiny with non-Muslim majority countries calling for stricter control measures like the surveillance of Muslims, preventing mosque construction and supporting the introduction of Muslim identification documents. South Africa’s Muslim population represent only one and a half percent of the population but it has a strong presence in the country due to an active and involved community. This community of Muslims have lived in harmony with the Christian majority in South Africa for years. It is perhaps one of only a handful of countries where this has succeeded.

One of the reasons for this is the way Islam was introduced to South Africa. Islam first arrived on our shores though slavery, which began in mid 1600s to the mid 1800s when the Dutch sent slaves and political prisoners to the Cape Colony from Indonesia and other Asian countries. The second wave of Muslims arrived from India as indentured labourers to work in sugar cane farms for the British in the late 1800s. This history of slavery is part of the reason why Muslims are so organically a part of South Africa, says Gabeba Baderoon, an academic and author of Regarding Muslims, a book that traces the role of Muslims in South Africa. “South Africa was built not only on colonial occupation and land theft but on slavery and indentured labour. Islam is intricately connected to these deep beginnings because many enslaved and indentured people were Muslims and the long history of struggle during colonialism is part of the reason that Islam is an ordinary, organic and indigenised part of our present,” Baderoon tells the Huffington Post South Africa.

Khadija Patel, a Muslim journalist and editor of the Mail & Guardian, echoes similar sentiments. “Islam in not homogenous, it is many things and it has grown through an organic process that speaks to the long and difficult history of this country.”

Despite their small numbers, Muslim South Africans are visible in many fields, including our politics. In 1998 former South African president Nelson Mandela reflected that: “Our country can proudly claim Muslims as brothers and sisters, compatriots, freedom fighters and leaders, revered by our nation. They have written their names on the roll of honour with blood, sweat and tears.” Some Muslims, most notably Yusuf Dadoo, Ahmed Timol, Ismail Cachalia and Fathima Meer, fought in the struggle against apartheid.

But the Muslim community in South Africa has not been without its criticisms. Safiyyah Surtee, a Postgraduate researcher as the University of Johannesburg’s Religion Studies, says that Muslims do have a unique situation here but she believes that a lot more can be done on an interfaith level. “Muslims need to contribute more to interfaith, respect and harmony. I often find myself the only Muslim at interfaith events.”

Some within the Muslim community have been labelled racist, sexist, apathetic and unwilling to integrate into a South African community. There is a danger that they consider themselves separate from the people and government.

And most alarmingly, there is one aspect of the issues facing global Islam that has crept into an otherwise largely peaceful Muslim existence in South Africa: an undeniable strand of extremism. This may pose the biggest danger to the social cohesion South Africa enjoys with its Muslim population. While most were largely moderate Muslims, and a significant number well-integrated into society, some South African Muslims have actually joined terror groups. In 2015 a fifteen-year-old Cape Town girl was taken off a flight en route to join ISIS.

But then there are moments like anti-apartheid activist Ahmed Kathrada’s state funeral which demonstrate the power of South Africa’s real religious tolerance. His memorial in Cape Town was proudly hosted by the historically important St George’s Cathedral, and religious leaders in attendance at the Muslim funeral included the Anglican Archbishop. This prompted former University of the Free State vice chancellor, Jonathan Jansen, to write a viral post about religious cohesion in South Africa “where Christian, Muslim, Jewish, Hindu and other faiths come together in a broad swathe of South African humanity to remember a man who fought for all of us. Where on and off the stage no one racial or ethnic or religious group dominated the event”.

An active and committed community with a history in the country may be the reason why Islamophobia has had little impact in the country. Whilst there has been some protests to construction of mosques in Valhalla and most recently Atholl, these incidents are often related to the history of the area as previously white-only areas, and objections mainly came from white residents. This year the Western Cape experienced vandalism of two mosques in January; the mosques were desecrated after a public call on Facebook to burn Islamic places of worship. However there was an immediate outcry and the Christian community showed support with the local Bishop attending interfaith meetings at the mosque and publicly denouncing the acts.

Despite these incidents South African Muslims have experienced little of the current levels of fear and intimidation of global Muslim minorities and this may have something to do with the fact that Muslims have been allowed to develop their communities and thus feel settled enough to become active and contributing members of society. In 2014 The Pew Research Centre conducted a study on the perceptions of Americans towards members of different religious groups. The study revealed that whereas Jews, Catholics and Evangelical Christians were all viewed warmly, Muslims were viewed coldly. However several trends emerge from this research, an important one being that the more likely a person is to know a Muslim, the more likely he or she is to express positive feelings towards Muslims as a group.

South Africans rely on their immediate community and not on the media to formulate an understanding of Muslims and this has led to a far nuanced understanding of a currently misunderstood religion.

South African Muslims have a long and peaceful history in the country and while Islamophobia and extremism has been on the rise globally, and cannot help but affect us here, religious tolerance is still one of South Africa’s strongest traits – and a story we don’t tell often enough. It is a shared history of struggle, a Constitution that protects religious diversity and a remarkable tolerance for difference from many South Africans.