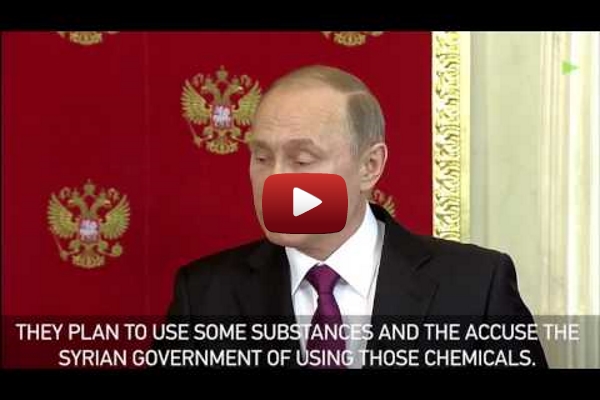 Russian President Vladimir Putin says that Moscow will formally call for an international investigation into what Western governments say was a deadly chemical-weapons attack by the Syrian government on civilians last week.

Putin lashed out on April 11, in his first public comments on Syria since the United States fired missiles at an air base in the Middle Eastern country to punish President Bashar al-Assad.

His remarks add to already heightened tension between Russia and the West just before a visit to Moscow by U.S. Secretary of State Rex Tillerson, who arrived shortly after Putin spoke and is due to meet with Foreign Minister Sergei Lavrov on April 12.

Putin said Russia would appeal to UN agencies in The Hague to investigate, apparently referring to the global chemical-weapons watchdog, the Organization for the Prohibition of Chemical Weapons (OPCW).

“We believe that any incident of this kind should be officially investigated,” Putin said. “We plan to turn to the United Nations bodies in The Hague and call on the global community to thoroughly investigate into this incident and make balanced decisions based on the investigation’s outcome.”

Russia and Syria have claimed that the toxic gas that killed dozens of civilians in an Idlib province town on April 4 was released when government bombs struck a rebel-controlled chemical-weapons depot — an assertion that Western governments reject and Tillerson has said was neither “plausible” nor “credible.”

Putin also claimed that Russia has received intelligence about planned “provocations” using chemical weapons that would put the blame on the Syrian government. He offered no evidence to back up the assertion.

“We have information from various sources that such provocations — I cannot call them otherwise — are being prepared in other regions of Syria, including in the southern outskirts of Damascus, where they are again planning to throw some kind of substance and accuse Syrian official authorities of using it,” Putin said after during a televised press conference.

Putin alleged that Russia has heard that the United States is planning strikes on the southern Damascus suburbs — also without any evidence.

Russia has given Assad crucial diplomatic backing throughout the war in Syria, which has killed more than 300,000 people and uprooted many more.

Putin said that the Western accusations against Assad reminded him of claims, ahead of the U.S. invasion of Iraq in 2003, that Saddam Hussein had stockpiled chemical weapons.

Suggesting that he was quoting from a Soviet-era satirical novel, he said such claims were “boring” and added, “We’ve seen this all before.”

Before departing Italy for Moscow on April 11, Tillerson urged Russia to abandon its support for Assad after his repeated use of chemical weapons and join the United States in seeking a peaceful future for Syria.

“We hope that the Russian government concludes that they have aligned themselves with an unreliable partner in Bashar al-Assad,” Tillerson told reporters, calling the alleged use of a nerve agent an act of “barbarism.”

Putin’s spokesman, Dmitry Peskov, said before Tillerson’s expected arrival that a meeting with Tillerson was not on Putin’s schedule “yet.”

Russian media reports have quoted unnamed sources as saying there are plans for a meeting between Putin and Tillerson, the highest official in President Donald Trump’s administration to visit Russia.

Meanwhile, the Russian Foreign Ministry said that Lavrov will meet with the foreign ministers of Syria and Iran in Moscow later this week.

With reporting by AP, Reuters, Interfax, and Lifenews, and TASS.