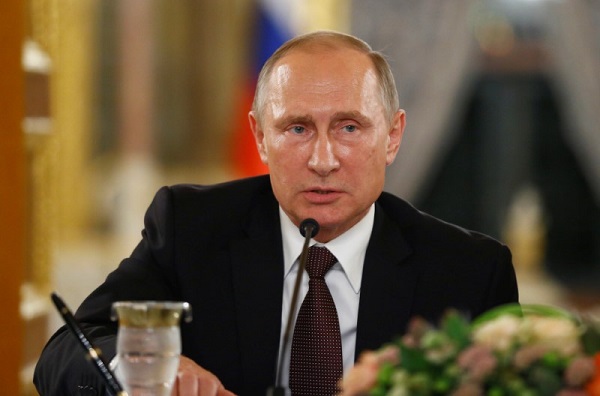 Russian President Vladimir Putin risks losing hard-won gains in Syria after the U.S. upended the balance of forces by striking at his ally President Bashar al-Assad in response to an apparent chemical attack that killed scores of people.

Putin condemned the attack as an act of “aggression against a sovereign state” and suspended an agreement with the U.S. to avoid hostile incidents in the skies above Syria. Russian Foreign Minister Sergei Lavrov said he hoped what he called “provocations” wouldn’t lead to “irreversible results,” while the Defense Ministry in Moscow said it will strengthen Syria’s ability to protect itself.

Drawing a parallel to the 2003 U.S.-led invasion of Iraq, Lavrov accused the U.S. and its allies of seeking regime change by sabotaging Russian efforts to secure a Syrian peace deal. A Russian air campaign since late 2015 helped Assad reverse the tide of the six-year war with rebels. After persuading Turkey, one of the main rebel backers, to help broker a cease-fire, Russia’s efforts to secure the Syrian leader’s grip on power through a peace agreement have now been thrown into doubt by the U.S. Turkey praised the airstrikes and called Friday for a no-fly zone in Syria as well as for Assad’s swift removal.

The sudden escalation has catapulted tensions between the world’s two largest nuclear-armed powers to the highest level since President Donald Trump took office in January. The Kremlin said the U.S. action will cause “considerable damage” to ties between Moscow and Washington. The U.S. said it had worked to minimize the risk of causing Russian casualties in the attack, which killed at least six Syrian servicemen.

Trump’s military move, which he said was a necessary response to an “affront to humanity” after more than 70 people died in a poison gas attack in northwest Syria on Tuesday, puts the U.S. and Russia into a potentially dangerous stand-off as Moscow stands behind Assad.

Russia suspended a cooperation pact with the U.S. aimed at avoiding incidents between the two countries’ planes in the crowded airspace over Syria by establishing direct hotlines between their militaries. The Russian navy is sending a frigate armed with cruise missiles to its Syrian base in Tartus, Tass news service reported, citing a diplomatic official it didn’t identify.

“This is very risky,” said Andrei Kortunov, head of the Russian International Affairs Council, a Moscow-based research group set up by the Kremlin. “This agreement helped to avoid direct military confrontation in this difficult situation. We don’t want to start World War III.”

Until recently, Syria had seemed the one area where Putin and Trump were certain to find common ground. Trump during his election campaign had pledged to cooperate with Russia in fighting terrorism and top officials have made it clear that the U.S. no longer seeks regime change in Syria.

The U.S. leader was forced into action after the anti-Russian establishment in Washington boxed him into a corner and Trump increasingly resembles his defeated Democratic opponent, Hillary Clinton, said Oleg Morozov, a former top Kremlin official who’s now a member of the upper house of parliament’s international affairs committee. “The conflict in Syria, which was heading to a peaceful resolution, is now flaring up again,” he said.

The U.S. airstrikes may be a “one-off” that Trump doesn’t intend to repeat, said Kortunov, the head of the Kremlin-linked research group.

But the goal may also have been to demonstrate “that the U.S. is ready for such actions and on a larger scale if necessary,” he said. “And this is a signal to Putin that Trump isn’t like Obama and won’t stand on ceremony.”

Trump’s precedessor, Barack Obama, shied away from military action in Syria even though he backed the ouster of Assad. In 2013, he called off threatened U.S. airstrikes in response to a chemical attack outside Damascus that killed more than 1,000 people and opted to strike a deal with Russia to remove Assad’s stockpiles of the weapons.

Some voices in Moscow are questioning whether rogue elements in the Syrian regime could have been responsible for the latest chemical attack, which would put Russia in a very awkward position as Assad’s main backer.

Under pressure from allegations in the U.S. that Russian hacking helped secure his election, Trump’s priority is to show that he’s strong and “anti-Putin,” according to Mikhail Barabanov, a Moscow-based military researcher. The U.S. role in Syria is likely to increase after it fired as many cruise missiles at the country in one night as Russia has in its entire military campaign, he said.

“Russia is facing major problems because its small and cheap war in Syria could only work in the absence of serious Western involvement,” Barabanov said. “If the U.S. decides to jump in, Moscow will have to risk serious confrontation — unlikely just for some Assad — or put its tail between its legs.”