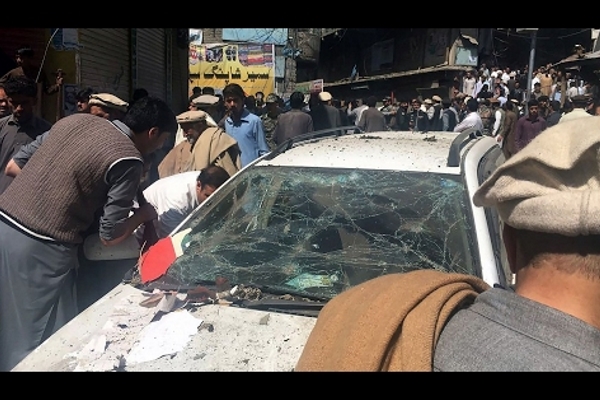 ISLAMABAD — Officials in Pakistan say a powerful bomb Friday ripped through a busy market in a northwestern tribal town on the Afghan border, killing at least 22 people and wounding more than 50 others.

Witnesses and local politicians say the blast in Parachinar, the administrative center of the semi-autonomous Kurram tribal district, occurred near an entrance to a Shi’ite mosque dedicated for female worshipers.

It is not clear if the car bomb was set off by remote control, or a suicide bomber carried out the attack.

Jamaatul Ahrar, a militant group fighting along side the anti-state Pakistani Taliban, claimed responsibility for the deadly bombing. The group has taken credit for most of militant attacks across the country this year in which scores of people have died.

Many people have been seriously wounded and residents fear the death toll will rise.

Military helicopters have been sent to the remote tribal area for speedy evacuation of victims, said an army statement.

”The network of terrorists has already been broken and it is our national duty to continue this war until the complete annihilation of the scourge of terrorism from our soil,” an official statement quoted Sharif as saying.

U.S. ambassador to Pakistan David Hale also denounced the bombing. “The United States will continue to work in partnership with Pakistan to dismantle and destroy terrorist networks,” Hale vowed.

A suicide blast in Parachinar in January killed at least 23 people and wounded more than 50 others.

The tribal belt is traditionally notorious for harboring militants engaged in violent attacks in both countries.

One of the tribal districts — North Waziristan — was until recently condemned by American military commanders as the “epicenter” of international terrorism.

The region has for years served as a training ground for Taliban and militants linked to the Haqqani network waging insurgency in Afghanistan.

Pakistani authorities, however, say recent sustained counterterrorism military operations have secured most of the border region.

Islamabad alleges that militants linked to the anti-state Pakistani Taliban have fled and taken shelter in Afghan border areas and are plotting attacks in the country from there.

Pakistan has lately stepped up efforts to strengthen security along the nearly 2,600-kilometer largely porous Afghan border, including building a fence in areas vulnerable to militant infiltration.

Friday’s bombing happened on a day when President Mamnoon Hussain signed a bill into law reinstating controversial military courts in the country for two years, after a lapse of two months.

A wave of suicide bombings last month killed scores of Pakistanis and prompted the government earlier this week to move the parliament to approve revival of the courts.

Officials insist the courts are required to speedily try and punish suspects in terrorism-related cases to deter militancy in Pakistan. The special tribunals were first introduced for two years in January 2015.

Human rights groups have opposed the military courts from the outset and condemned their reinstatement, saying they fail to provide transparent justice and violate the suspects’ legal rights, unlike civilian courts.