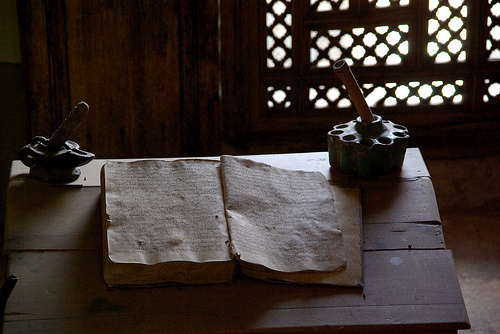 Imam Malik bin Anas (b. 93 AH, d. 179 AH) was one of the greatest Islamic scholars of all times. Among his 1300 disciples were people from all walks of life; rulers, judges, historians, Sufis, poets, and scholars of Qur’an, Hadith, and Fiqh. The Khalifah attended his class as an ordinary student along with others.

Yet it was the same Imam Malik who was more likely to say “la adree” (I don’t know) or “la ahsin” (I don’t know it very well) in response to the constant flow of queries directed toward him. Once a person approached him and told him that he had come from Marrakesh — after a six month journey — only to ask a question. “My people back home are waiting for your answer,” he said. After hearing the question Imam Malik replied, “Please tell your people that I do not know the answer to your question.” In one case he was asked forty-eight questions and in response to thirty-two of them he said, “I don’t know.” It was commonly said that if somebody wrote down Imam Malik’s answers to questions, he could easily fill pages with “I don’t know” before writing a real answer.

The reason for this extraordinary care was nothing but a deep sense of accountability before Allah. It was the caution of a person who was standing between Hell and Heaven, fearful that one wrong step could lead him to the former. “Before you answer a question about religious law, visualize that you are standing at the gates of Hell and Heaven,” he used to advise others.

Of course, he was not alone. Ibn Jareej used to attend the majlis (sitting) of Abdullah ibn Umar, Radi-Allahu anhuma. “In answer to more than half the questions he used to say I don’t know.” Ibn Abi Layla saw 120 Sahaba (companions). “Whenever one of them was asked a question he wished that someone else would answer it.”

Nor was this caution restricted to Fiqh (Islamic Law). In interpreting the Qur’an or the Hadith, they exercised same care. Imam Muslim whose Sahih Muslim is unanimously considered second of the two most authentic collections of Hadith, had set for himself only the task of Hadith collection leaving the job of interpreting them to others. He was so concerned about this that he did not even divide the book into chapters for such classification would amount to interpretation.

Fast forward to today and you are in a totally different world. Across the Muslim world today there are innumerable “experts” who are willing to interpret the Qur’an and Hadith, give fatwas, even do Ijtihad (independent juristic inquiry) — all without the benefit of even the minimum religious education and training. If such a person is a good writer or speaker that is qualification enough. For the audiences today readily confuse eloquence with scholarship. If the “expert” also carries the magic title “Dr.” that certainly fills any gaps in his authority. It does not matter whether his educational achievement maybe in gynecology or business administration, journalism or nuclear science, physics or animal husbandry.

The results have been disastrous. The vast confusion and ignorance of even elementary subjects in religious teachings among the seemingly “educated” classes today is unprecedented. Today one can find all sorts of un-Islamic ideas and practices, conjectures, whims, and desires finding approval in the “Ijtihaddom” that has been concocted. What is more we also make a virtue out of this catastrophe by bragging that we have broken the “shackles of blind following” and opened direct access to the original sources of Islamic teachings. But no amount of bragging can hide the fact that this is the equivalent of allowing unlicensed and untrained people to practice medicine. Although in this case the resulting death and injury is not physical and is therefore less visible.

The reasons for this malaise are complex but two stand out. First, the schooling of our “educated” people included very little or none of Islamic education. Plainly, we do not know and we do not know that we do not know. Second, many of us harbor great mistrust of those who have received formal Islamic education. In turn this is also based on ignorance of what constitutes such education. It is a distant world, a black box, and all we know is that there is something wrong with it.

For a change let us visit a darul-uloom where they are screening candidates for admission to the next ifta class. The top scorers from the regular alim course were given a test and just the top ten scorers from the test will be brought for interview. They are tested not only for their knowledge of Arabic and religious texts but also their ability to understand complex real life situations and to communicate well. Once they graduate, they will do an internship for years under qualified and experienced muftis. But even the best of their teachers will consult others when they face a difficult issue. After exercising the best of caution they will learn to say “Allah knows best” at the end of their answers.

It is not to say that the decline of Muslim political power and the general decline of Muslim civilization has had no effect on this area of activity or our darul-iftas are running problem free. But can anyone in all honesty declare that an alternative that misses each and everyone of these features is better? There is a famous saying in Urdu. “A pseudo doctor is danger to life. A pseudo religious scholar is danger to faith.” Do we know the danger?