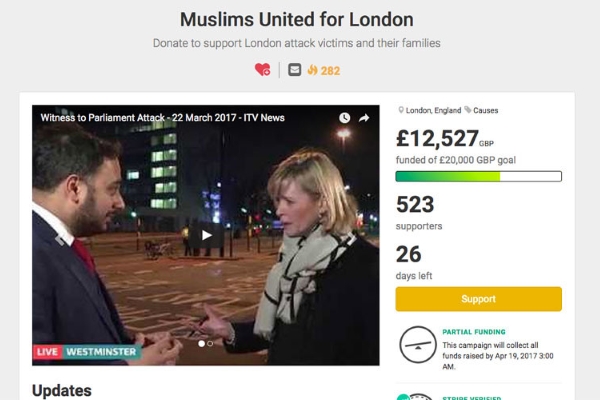 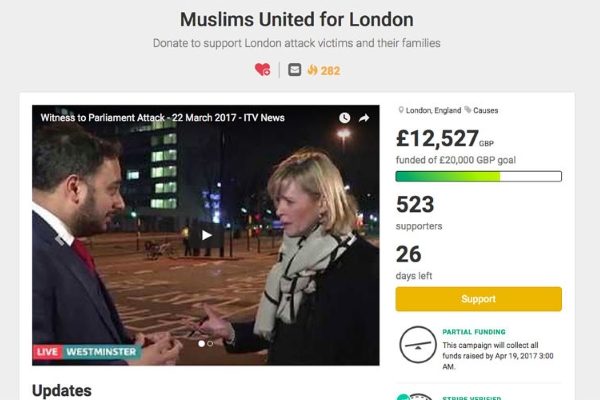 A Muslim initiative to fundraise for the family of killed PC Keith Palmer raised over £12,000 (US$15,000) in less than one day.

The campaign starter and communications expert, Muddassar Ahmed, witnessed the terrorist attack and found himself inside the Westminster lockdown in the hours that followed.

“I have been in touch with networks within British Muslim communities and can assure you that we all stand with fellow Londoners during these difficult times and want to extend our support by raising funds to help with the immediate, short-term needs of the families of Keith Palmer, the other victims and their families,” Ahmed wrote on the fundraising page.

“Though this is a Muslim-led campaign, we welcome our friends of other faiths and none to also contribute. We ask particularly that British Muslims, mosques, Imams, leaders, and groups endorse and promote this initiative.”

It came as a Metropolitan Police Federation fundraising campaign set up on Thursday morning gathered £200,000 by late afternoon.

Nearly 10,000 people donated to the cause, including well-wishers from around the world.

Stephen Redgewell, who set up the page, said it was “heart-warming” to see the outpouring of solidarity.

“A big thank you to all those out there that have raised money via their own appeals and collections at work etc, and have donated it to this link or paid into the bank account for this link. Your efforts and contributions are greatly appreciated and will all be passed onto Keith’s family,” he added.

Palmer, a 48 year-old married father-of-three, worked for the Parliamentary and Diplomatic Protection Squad and was a fan of the London football club Charlton FC.

Other fans of the club joined in the crowdfunding, honoring their common love for the team also known as the Addicks.

A fellow Charlton supporter named Wayne donated to the fund, adding the words: “You went to work to serve and protect our great nation, may you rest in peace. You will never be forgotten. My sincere thoughts are with all your family and friends.”

“From a former officer I would like to pass on my deepest condolences to Keith’s family and friends. Keith was a very brave man,” read an anonymous message with a £100 donation.

A further crowdfunding initiative by the Police Dependants’ Trust raised an additional £5,000 for officers affected by the attack.