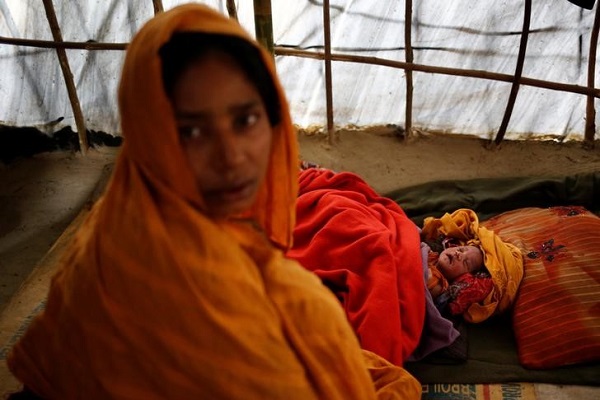 Noor Begum, 26, sits next to her one-day-old daughter Sumaiya as she poses for a photograph inside their shelter in Balukhali unregistered refugee camp in Cox’s Bazar, Bangladesh, February 8, 2017. Noor Begum came to the camp one-and-a-half months ago from Nagpura village with her husband Jahangir Alom. REUTERS/Mohammad Ponir Hossain SEARCH "ROHINGYA MOTHERS" FOR THIS STORY. SEARCH "WIDER IMAGE" FOR ALL STORIES.

Scared, hungry and badly beaten, Rohingya women fleeing an army crackdown in Myanmar recount harrowing tales of destruction and death: a father burned alive, an uncle slaughtered with a machete, a brother arrested and not heard from again.But huddled in makeshift refugee camps, dependent on food rations and the mercy of fellow refugees, they also carry something else: hope inspired by their newborn children, for whom Bangladesh is now home.

The babies’ delicate features present a sharp contrast with the squalid conditions of the makeshift refugee camp, where a skipped meal or food poisoning can mean the difference between survival or death.

The United Nations said it had committed mass killings and gang rapes and burned villages in a campaign that may amount to crimes against humanity and ethnic cleansing.

“One-and-a-half months ago the military came to our village and kept firing their guns,” said Amina, one of the refugees, as she cradled her 16-day-old daughter, Sumaiya.

“You see us alive only because god was so kind,” added Amina, 30. “They caught my uncle and my younger brother and we don’t know whether they are dead or alive.”

The military calls its crackdown on the Muslim minority a lawful counterinsurgency operation to defend the country and has denied the allegations. Myanmar launched several investigations into the alleged abuse, but human rights monitors say they lack credibility and independence.

Amina is one of about 75,000 refugees to have successfully made an often perilous crossing through the fields, eventually fording a river boundary to reach Bangladesh.

Some starved for weeks, while others gave everything they had to pay off people smugglers. Many never made it, drowning or getting shot by Myanmar security forces on the journey.

Survivors, who rely on shelters of bamboo sticks and black plastic sheets for protection from a scorching sun, face a major challenge in keeping their newborns alive.

The camps often lack medical facilities and running water, leading aid agency workers to worry about an outbreak of water-borne diseases such as cholera.

“People are living in tough circumstances. Most don’t have access to regular medical services and are not getting enough food,” said Azmat Ulla, an official of the International Federation of Red Cross in Bangladesh, launching an emergency appeal for help on Monday.

Many women struggle for funds, having lost male relations, the sole breadwinners in most families. They rely on handouts from the World Food Program and other agencies.

Clinics run by non-government bodies and the U.N. are overrun, scrambling to treat thousands of patients each month.

Minara Begum, 22, calms her crying one-month-old son, Ayub, as she tells of fleeing from her village of Nasha Phuru with her husband and mother-in-law.

“My child doesn’t get enough breast milk as I don’t eat enough nutritious food,” she said. “I have to buy milk powder, though it’s not very good for my son.”

Many women said they survived or witnessed acts of gang rape by soldiers.

An official of a large Western aid agency told Reuters it had distributed more than 660 “dignity kits” for assault victims, besides counselling nearly 200 women who suffered trauma after the killing of a family member, usually male.

“This is just the tip of the iceberg,” said the worker, who declined to be identified because he was not authorised to talk to the media.

The quiet of Cox’s Bazar, a beachside resort town, makes for a jarring contrast with the temporary camps amid rice paddies and salt flats just an hour’s drive away.

A red blanket spread on the earthen floor of her shelter, Rehana Begum, 25, cares for her one-day-old daughter.

“We were in our home and suddenly the military came to our village and started shooting,” said Rehana Begum, who fled her village of Jambuinna in Myanmar three months ago.

“When we heard the sound of gun shots we immediately went to our relatives. We walked for four hours without any food and water to reach the border at 1 a.m. We paid $18 to a broker to cross.”

The figure is equivalent to 25,000 Myanmar kyat.

“They wanted to send us back, but then we heard gunshots from the Myanmar side and the guards released us, saying, ‘Stay in Bangladesh and save your lives’,” she said.