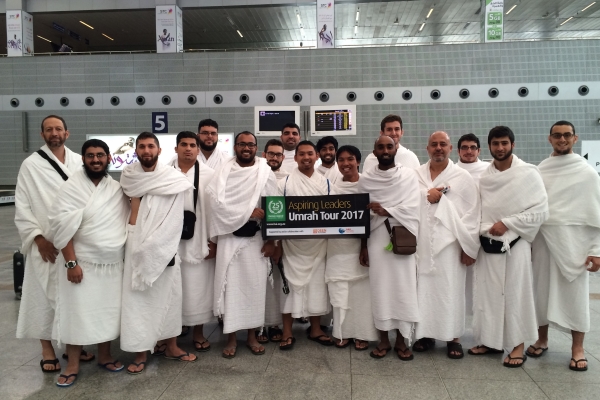 Human Appeal International Australia (HAIA) in conjunction with Deen Academy (DA) has concluded their third annual Aspiring Leaders Umrah Tour which saw a group of young Muslim Australians visit Saudi Arabia, Jordan, Turkey and UAE. The tour took place from 3 to 22 February 2017, comprising fifteen participants from Sydney, Melbourne, Adelaide and for the first time Brisbane. The group of young university students and graduates were led and mentored by Bashar Al-Jamal, director of HAIA and Dr Zac Matthews from DA.

The journey began with the minor pilgrimage (umrah) in Mecca, Saudi Arabia. After performing the rituals of spiritual cleansing as taught by Prophet Abraham and the final Messenger of God, Muhammad (peace be upon them both) the group then set out for The City of Light – Medina – the Prophet’s city, where his mosque and grave are located. There they group visited the Prophet (peace be upon him) and then several other places of significance. In both cities the group toured museums and exhibitions including Assalaamu-alayka Ayyuhan-Nabiy (The Prophet’s Project), the Holy Mosques, Ninety-Nine Names of God, etc. The group also attended a lecture on the Prophet’s leadership by Dr Ammara from Taiba University in Medina. The group also visited, in the two cities, the historical sites of Arafat, Mina, Quba, and Qiblatain. The most physically demanding event of the stay in Mecca was climbing the 600 steps of the Mount of Light to reach the Cave of Hira where the Prophet first received Divine revelation from the Archangel Gabriel.

After renewing spiritual and emotional connections at Islam’s holiest of places, the tour then moved on to Jordan. The group visited a distribution centre and assisted with HAIA’s Winter Aid Appeal handing out gas cookers, blankets, mattresses and food packs to more than sixty Syrian refugee families. The provisions were estimated to last about three weeks in the cold winter. The group also also attended an award ceremony at an Orphan Centre, met with the Conservation of the Holy Quran Society in Amman, and the Australian Ambassador the honourable Miles Armitage. The tour group also visited historical sites at Jerash, Um Qais, Ajloun, Petra and spent the night camping in the desert at Wadi Rum, and attended a lecture on the importance of the Quranic message by Prof. Zaghloul El-Naggar.

From Jordan, the group travelled to Istanbul in Turkey, equally rich in history bridging the East and West. There the group visited the famous Fatih mosque, followed by Sultan Ahmet, Abu Ayyub Al-Ansari and other significant places. The tour group was fortunate to be hosted by the Grand-Mufti of Istanbul, Prof. Hasan Yilmaz as well as the Mufti of Ayup, Dr Muammer Ayan. Another highlight was a visit to TRT World hosted by former Sydney ABC journalist Mohammed Taha. Other visits included a breath-taking ferry ride on the Bosphorus Strait, shopping at the Grand Bazaar and eating delicious broad beans outside the Suleimeniyeh mosque. The group also attended a workshop on managing public opinion by Dr Nasir Al-Mani` from Anadolu Leadership and Management Training.

From Istanbul, the tour moved to Dubai and visited the HAI offices in Ajman where presentations about its orphan program and various other humanitarian projects were outlined. The group also participated in a workshop on leadership conducted by former Sydney-sider Ahmed Elshrif and did some site-seeing in Dubai before returning to Australia.

The overwhelming feedback from participants was that the tour was “a trip of a lifetime” that they would never forget on their journey of personal development to serve the needs of humanity.