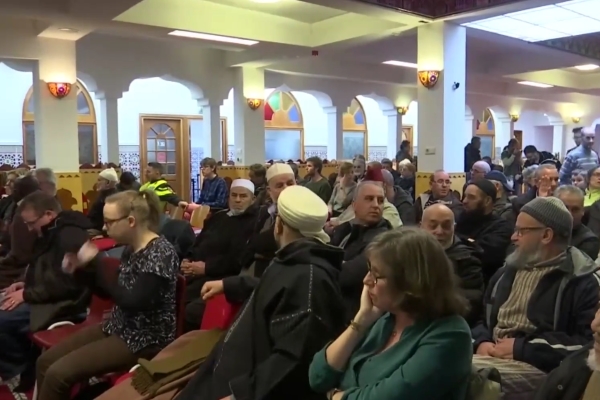 Hundreds of Dutch citizens met at an Amsterdam mosque on Sunday to show solidarity with the country's Muslim population, as an anti-Islam MP again vowed to shut mosques and ban the Koran should he win upcoming elections.

By: The News Arab

Hundreds of Dutch citizens met at an Amsterdam mosque last Sunday to show solidarity with the country’s Muslim population, as an anti-Islam MP again vowed to shut mosques and ban the Koran should he win upcoming elections.

Some 200 concerned citizens and organisers representing a broad coalition against racism in the Netherlands gathered at the central al-Kabir Mosque, saying they were deeply worried about the rise of discrimination against Muslims in the European country.

“It’s very important that we make our voice heard. We as a Muslim community pose no danger whatsoever to society,” said Najem Ouladali, one of the organisers of the meeting which also included members of Amsterdam’s gay and lesbian community.

“In fact, we are victims too of Islamic extremism,” added another speaker, Abdou Menebhi, who chairs a Moroccan organisation in the Netherlands.

Various estimates put the Netherlands’ Muslim population between 840,000 to 960,000 people, or around 5.0 percent out of a population of some 17 million people. Most Muslims are from Turkish or Moroccan descent, according to the Dutch central statistics office.

Talk during the meeting, which was paused for afternoon prayers, constantly returned to Dutch firebrand far-right MP Geert Wilders, who is campaigning ahead of elections on an anti-Islam ticket.

The 53-year-old Wilders has courted controversy with his hardline anti-Islam, anti-immigrant stance and his incendiary insults against Moroccans and Turks.

He has vowed in his party’s one-page manifesto that if elected he would ban the sale of Korans, close mosques and Islamic schools, shut Dutch borders and ban Muslim migrants.

Support, however, for Wilders and his extreme stance seems to have withered in recent days according to the latest polls.

“We believe that what Wilders is doing is very dangerous to our society,” Ouladali told AFP after the mosque meeting, speaking in Dutch.

Ineke van der Valk, a researcher at the University of Amsterdam told the meeting incidents of hate crimes against Muslims were on the rise in the Netherlands.

“There has been a worrisome rise in this kind of activity in our country,” Van der Valk said.

Meanwhile across earlier across the Dutch capital, the firebrand Wilders again vowed to close mosques, should he become prime minister after the vote, seen as a key litmus test of the rise of populist and far-right parties ahead of other national elections to be held across Europe later this year.

“Closing mosques may be more difficult but you can do it,” Wilders told journalists in an industrial suburb of Amsterdam earlier at a press meeting.

“You have to change the Constitution. It takes time, certainly in Holland… but I am a lawmaker and if anyone can change the constitution and propose this, it’s me,” Wilders said.

Just ten days before elections Wilders and his Freedom Party (PVV) appears to have slipped into second place behind the Liberal party of incumbent Prime Minister Mark Rutte after months of leading the opinion polls.

“I am confident we will all have excellent results,” Wilders told a gaggle of mainly foreign journalists, referring also to France’s far-right presidential hopeful Marine Le Pen.

“Even if that will not be the case, the genie will not go back into the bottle… certainly things will change in Europe,” he insisted.

In an odd press conference, Wilders gathered reporters from international organisations in a street in an Amsterdam industrial area, surrounded by a heavy security detail of uniformed and plain-clothed police officers.

Boosted by the polarising debate over immigration, and initially by the victory of Donald Trump in the US presidential race, Wilders had been leading polls since late last year.

But the latest collated polls by the Dutch website Peilingwijzer (Poll indicator) from seven different agencies on Saturday showed Rutte’s VVD party would now win 23 to 27 seats in the 150-seat lower house of parliament, with the PVV set to garner 22-26 seats if elections were held today.