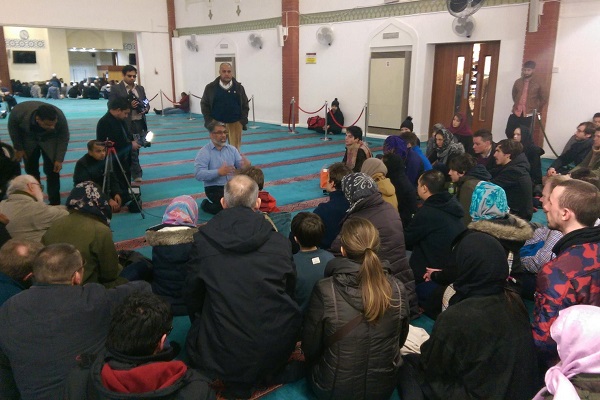 Over 150 mosques across Britain opened their doors on 5 February 2017 for the third annual Visit My Mosque Day, in what is thought to be the world’s largest mosque open day programme.

Participating mosques from Inverness to Plymouth, from Belfast to Ipswich, as well as major cities like London, Birmingham, Manchester Glasgow and Cardiff, opened their doors, sharing tea and biscuits with their neighbours as well as a guided tour of the mosque by volunteers. Some mosques put on exhibitions and poster displays, while others organised henna and calligraphy stalls, “Try on a hijab” stalls or “Design your own prayer mat” activities for children.

The day – facilitated by the Muslim Council of Britain (MCB), Britain’s largest Muslim umbrella body with more than 500 affiliated mosques, charities and schools

Speaking at the national launch event in Khizra Mosque, Manchester, Muslim Council of Britain Secretary General, Harun Khan, said, “We hope that Visit My Mosque Day will become a great British institution, as so many British Muslims opened the doors to their mosques and their hearts. We were also moved by the record number of visitors who came in solidarity with Muslims in the face of the hostile atmosphere they find themselves in.”

Speaking after visiting the Islamic Foundation in Leicester, Richard said, “I never realised just how relaxed and inviting Islam can be. It is clear that all good people share a common wish for the furtherance of the good of humanity.”

“My husband and I travelled to visit Southampton Mosque and were delighted with the warm welcome and fascinating insight into the Muslim life. Seeing the mosque and hearing the Q&A sessions really gave us a feeling of knowing more about their beliefs,” said Tessa.

Some mosques in London that were not taking part due to internal building refurbishments reported visitors knocking on the door asking to come inside, while organisers at Lincoln Mosque said they received visitors who’d travelled from neighbouring towns over 40 miles away after hearing about it on local radio.

Jeremy Corbyn posted on Twitter, saying, “A gentle message to Trump: Drinking tea together is far better than building walls to keep us apart.” Prime Minister, Theresa May, sent her apologies to her local mosque in Maidenhead, which she had visited in June 2016 for Ramadan iftar event, but said she looked forward to visiting again on a future occasion.

As part of their open days, mosques were encouraged to showcase social action initiatives they organise which help their local communities. Glasgow Central Mosque runs a regular blood donation drive in partnership with the NHS, while Jamia Masjid Al-Medina Mosque in Middlesbrough hosted a Boxing Day feast for the homeless last December.

“It is clear this initiative has struck a chord with many people across the world, with people as far away as Canada, France, Malaysia and the US contacting us asking for similar local events,” MCB spokesperson told The Muslim News.

“We tried our best to invite as many mosques as possible across the UK to take part on February 5, however, we know that some did not hear about it in time. The initiative will be running again in 2018 and we welcome all mosques across the UK to get involved insha Allah (God willing).”