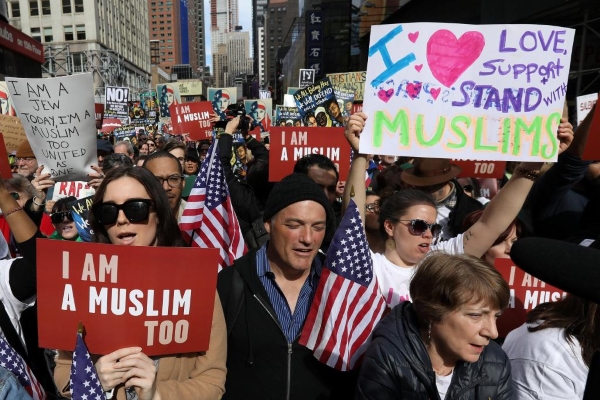 Thousands turned out for a "Today I am Muslim Too" rally Sunday in Times Square on Feb 19 2017.

WASHINGTON: Despite an uptick in hate crimes against US Muslims in the months since Donald Trump won the presidential election in November, a wave of public solidarity and improved views of both Muslims and Islam signal some good news for the community in the medium- and long-term.

Data and public opinion polls conducted by Shibley Telhami — a non-resident senior fellow at Brookings and the Anwar Sadat professor for peace and development at the University of Maryland — show significant improvement in how US Muslims and their religion are viewed in the Trump era.

The change and improved attitudes constitute a backlash to the increasing Islamophobia that has accompanied Trump’s ascendancy to the White House. Telhami described to Arab News what is happening as a “parallel trend” to the shootings, vandalism and other kinds of hate crimes that have targeted the community.

The Southern Poverty Law Center has documented more than 1,000 hate crimes in the US since Trump won the election on Nov. 9. Meanwhile, the FBI is investigating a shooting in Kansas on Wednesday that killed one Indian engineer and injured another in a suspected hate crime that mistook the two men for being Middle Eastern.

“The sharp rise in hate crimes is definitely a big concern and a symptom of the deep polarization in the US,” said Telhami, adding: “Trump has successfully empowered a fringe segment of the US population that is detrimental to American values.” White nationalist groups and anti-Semitic voices have become more vocal since Trump won the presidency.

According to Bloomberg, “the New York Police Department (NYPD) received 143 hate-crime complaints between Nov. 8 and Feb. 19,” a 42 percent increase from the same period a year earlier. The Jewish community was the primary target of these attacks (72 percent), according to the NYPD.

Jewish community centers also received bomb threats in at least 10 locations across the US, reported Bloomberg. The vandalism of a Jewish cemetery in Missouri shocked the US public last week, prompting condemnation from Trump and a visit by Vice President Mike Pence.

However, this spike in criminal acts against minorities could tip the balance, and is driving a “heartening parallel trend,” said Telhami. “Trump has also empowered a majority of Americans on the other side of the equation to show solidarity with the Muslim community.” Almost 1,000 participants rallied in New York in solidarity with Muslims last weekend.

After a mosque in Texas was destroyed in a fire last month, Jews handed Muslims the key to their synagogue. This week, after the vandalism of Jewish headstones at the cemetery, an online fundraiser encouraging Muslims to donate raised over $100,000 in 24 hours to repair the damage.

Telhami referenced “four polls over the past year” that his center has conducted, which show that “Americans’ views on Islam and Muslims have become more favorable incrementally. Every single poll showed a positive change of around 12 percentage points. We are almost now at pre-9/11 numbers.”

Telhami said: “This is a revolution (in the perception of Muslims) taking place in America,” one where “Islam and Muslims are being integrated into the American identity as part of who they are.” The rise in Islamophobia has also prompted more active engagement from the community in US politics, whether it is running for public office or taking part in political and media discourse.

While Telhami stressed that it will “be hard to know which one of the two trends (Islamophobia or revolution) will win out because it is a function of politics,” he saw the trajectory of US values as one that would ultimately favor the embrace of Muslims.

As the Trump administration works on a second version of the travel ban, and authorities continue to investigate several hate crimes, the public backlash in solidarity with Muslims gives Telhami hope that the “good more than the bad will prevail as an effect of Trump.”