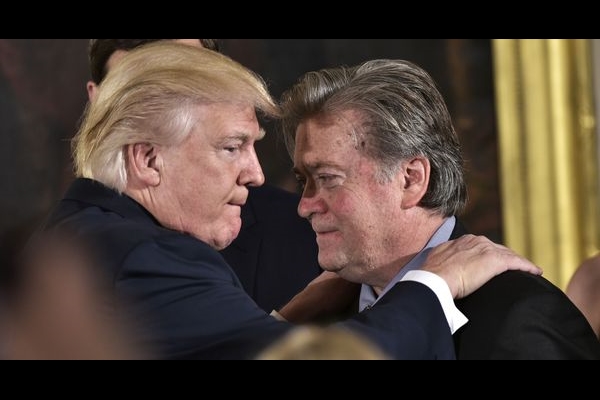 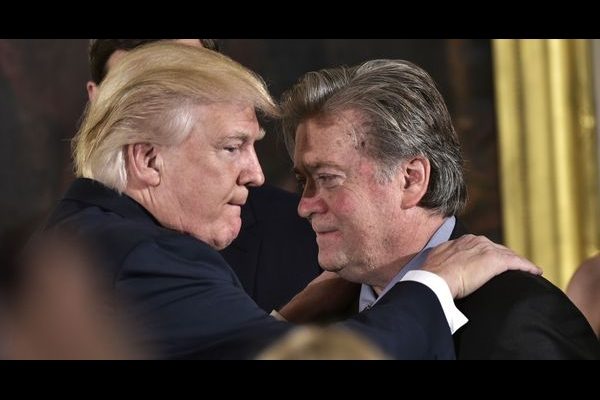 So that’s it. The guy is crackers. There’s no stopping him. And Steve Bannon appears to have his hands on the levers. Poor old Jared Kushner, the son-in-law with the much-trumpeted power to “tame” the American president, couldn’t prevent that disgraceful White House Holocaust statement which somehow just failed to mention the Jews of Europe. Don’t tell me it was left out to appease the Armenians – whose own 1915 genocide was always left out by cowardly US presidents to avoid upsetting the Turks.

But now the White House is making some Israelis deeply concerned. In an extraordinary attack, Bradley Burston of the leftist Haaretz newspaper has fired off a volley at the White House. “It’s an inconceivably scary thought,” he wrote this week, “that the Trump administration is simply winging it, breakneck, disrupting and detonating and taking America apart – and all of it without a plan. But here’s the even scarier possibility – that there is, in fact, a plan.”

The plan, according to Burston, is a Holy War. “Donald Trump needs a war. But not just any war. He needs just the right global non-Christian, all-powerful, all frightening, non-white, non-negotiable enemy… And he needs a doomsday weapon he can rely on. As it happens, he already has one. It’s called Steve Bannon.” Burston has been combing through some of the nonsense spouted by Bannon at a Vatican conference in 2014.

Here’s a sample of what Trump’s new point man said then: “…we’re at the very beginning stages of a very brutal and bloody conflict, of which if the people in this room, the people in the church, do not bind together and really form what I feel is an aspect of the church militant … to fight for our belief against this new barbarity that’s starting, that will completely eradicate everything that we’ve been bequeathed over the last 2,000, 2,500 years.”

There’s no point in saying that this is preposterous. It is. “We’re now, I believe, at the beginning stages of a global war against Islamic fascism,” quoth Bannon. And Burston is right when he dissects this unpleasant oration for – and I quote Burston – “not only does it predict the imminence and the inevitability of a war pitting Christianity against Islam, it obliquely suggests that Jews could find themselves a target for US Christian anger somewhere down the road.”

When Bannon worked at Goldman Sachs, he told his Vatican listeners, he could see “there are people in New York that feel closer to people in London and in Berlin than they do to people in Kansas and in Colorado, and they have more of this elite mentality that they’re going to dictate to everybody how the world’s going to be run”.

Now I know that Boris doesn’t want us to compare Trump to Hitler – though Trump himself represents a kind of theatrical fascism – but the above quotation is pretty damning. This was indeed the kind of statement that could be made in the 1930s in Germany. And Burston goes on to fillet the Bannon speech a little further.

A few minutes after the above quotation – and here I quote Burston again – “Bannon exuberantly responds to a question about the 2014 Republican primary defeat of then-House majority leader Eric Cantor – at the time the sole Jewish Republican in either the House or Senate. Bannon, calling Cantor’s defeat “monumental” and “the biggest election upset in the history of the American Republic”… and says that Cantor’s opponent won because “Middle-class people and working-class people are tired of people like Eric Cantor … selling out their interests every day to crony capitalists”.

Now this is pretty dreadful stuff – and this, remember, is Trump’s senior advisor with a seat on the National Security Council. And despite all Trump’s glad-handing for Israel, I suspect that the Israelis themselves are going to have a far harder ride with Trump’s administration than with Obama’s. They might get the US embassy moved to Jerusalem – but they might also be very worried that folk like Bannon are going to provoke a war with Iran.

The problem is that when folk like Bannon become powerful in the most powerful nation in the world, they really can start wars. What did the US government mean, for example, that Iran was “on notice” after its recent missile test (the one which didn’t actually break any rules)? Was that a warning of dislike – or war?

Of course, when your President lives in fantasy land, you can only expect journalists to do the same. My long-standing chum Thomas Friedman has called upon America’s top business leaders to save American democracy – as if the most capitalist of all capitalists are going to oppose the President when they’re all waiting to see if Trump is going to get rid of Nafta and the EU which help, as Friedman says, to drive so much of the world economy.

And I doubt if the great and the good in the East Coast journalism trade are going to defend America from its elected leader. If they have been so afraid of offending Israel for so many years, they are certainly not going to offend Trump. But that’s the trouble at the moment. How can you be fair to a fantasist, of a man – of men – who simply tell untruths. I do suspect we’ve been down this road before. I seem to recall most Americans believed Saddam arranged the 9/11 attacks. And wasn’t the whole nonsense about “weapons of mass destruction” an “alternative fact”. And I do recall a little problem with the 45-minute warning. You don’t have to be an American president to dream up this stuff.

I think that May will have to summon up a little more courage if she’s going to represent her people’s view of Trump. And I do think that Boris should be careful about what he says on the subject of Hitler. No, Trump is not Hitler. But he has one characteristic in common with the infamous Austrian corporal. What he says he’s going to do is exactly what he does. And he’s got Bannon beside him.