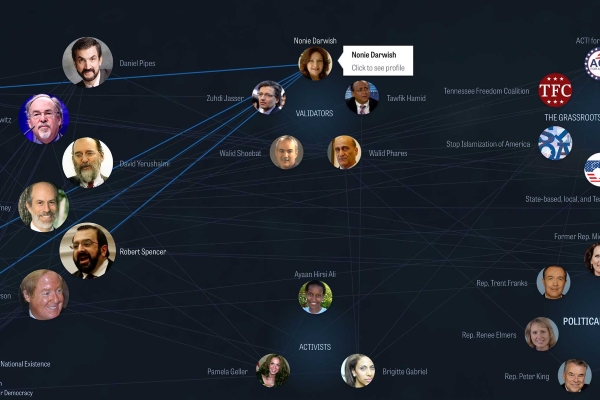 Ever since the 9/11 attacks, there has been a fringe element in American society that has claimed that the attacks were part of a centuries-old religious war between Islam and Christianity. They’ve claimed that Muslims constitute a grave threat against everyone in the United States and the Western world because Muslims are supposedly determined to establish a world-wide caliphate, which would necessarily entail conquering the United States, taking over the federal government, and running the IRS, DEA, Federal Reserve, Social Security administration, CIA, NSA, Pentagon, and all the other parts of the federal government.

This fringe element has now surged to national notoriety owing to the fact that there are now people within the Trump administration who appear to subscribe to that philosophy.

However, there have always been big problems with the anti-Islam  mindset. Let’s review three of them.

Doesn’t that seem rather odd? Here the Muslims have supposedly been coming to get us for centuries and not one single person in the anti-Islam crowd expressed even a tiny iota of concern during the entire 44-year history of the Cold War.

That’s because during the Cold War, the official bugaboo for the American people, as set forth by the Cold War-era national security establishment, was not Islam or terrorism but rather communism (or as conservatives used to say, “godless communism”). Throughout those four decades, it wasn’t the Muslims who were coming to get us, it was the communists. Or it was the Soviet Union, which was led by Russia (which has now been restored to semi-official bugaboo status, in conjunction with the Muslims) that was hell-bent on conquering the United States. It was in Moscow, Americans were told, that the international communist conspiracy to take over the world was based.

From the first grade in the public (i.e., government) schools to which state law forced their parents to send them, American schoolchildren had their minds indoctrinated and molded about how the Russians were coming to get us and force America to become a communist state. And it worked. By the time American children reached 18 years of age, most of them were absolutely convinced that America was in grave danger of falling to the communists. That’s what propelled them to blindly support the Cold War, the conversion of the federal government to a national-security state, the Korean War and the Vietnam War (both of which were waged without the constitutionally required congressional declaration of war), ever-growing support of foreign dictators, ever-growing interventions in foreign countries, ever-growing assassinations, ever-growing expenditures for the Pentagon, CIA, and NSA, and ever-growing infringements on the rights, liberties, and privacy of the American people.

Through it all, not a peep — not a single peep — about the supposed quest by the Muslims to establish a worldwide caliphate or about their supposed war to enslave Americans and force them to study the Koran and to establish Sharia law in the United States.

In fact, it was the exact opposite. When it was the Soviet Union, rather than the United States, doing the invading and occupying of Afghanistan, U.S. officials actually partnered with and supported some of the most extreme and fanatical Muslims who were fighting to oust the Soviets from Afghanistan.

When that happened, there wasn’t a peep of protest from anyone who is a part of the anti-Muslim crowd today. On the contrary, they cheered the partnership with radical and fanatical Muslims because, again, communism, not Islam, and the Soviet Union (Russia) were the official bugaboos.

The anti-Muslim crowd cheered and celebrated the many years of deadly and destructive occupations that followed the invasions of both countries. By this time, their mindsets had shifted from communism as the official bugaboo to Islam as the official bugaboo. So, every time that U.S. soldiers bombed, shot, killed, maimed, or tortured people in Iraq or Afghanistan, the anti-Muslim crowd made it a point to thank the troops for “their service” in both countries, notwithstanding the fact that neither the Afghan government nor the Iraqi government had ever attacked the United States or even threatened to do so.

To this day, the anti-Muslim crowd continues to support the U.S. interventions in Afghanistan and Iraq.

All that support for the Pentagon’s and CIA’s interventions in Afghanistan and Iraq, however, poses a big problem for the anti-Islam crowd, one that they have never addressed and maybe not even considered.

That problem is this: The U.S. invasions and occupations succeeded in installing official Islamic regimes in both Afghanistan and Iraq.

Don’t believe me? Then take a look at the following two websites, which feature the official constitutions of Afghanistan and Iraq. You will immediately notice something important: Pursuant to the constitutions of both countries, the regimes are both official Islamic regimes.

Constitution of the Islamic Republic of Afghanistan

Needless to say, this remarkable “achievement” by U.S. troops places the anti-Islam crowd in a very unenviable and quite awkward position. Do they renounce their longtime support for the invasions and occupations of Afghanistan and Iraq, given the fact that the interventions gave rise to two official Islamic regimes, ones that, according to the anti-Islam crowd, are coming to get us as part of the supposed quest by Muslims to establish a caliphate on the United States and the rest of the world?

So far, there have been no renunciations or denunciations of the U.S. invasions and occupations of Iraq and Afghanistan on the part of the anti-Muslim crowd. In fact, they continue to thank the troops for their service in both countries.

Indeed, it’s still not too late for the U.S. government to effect new regime-change operations in both Afghanistan and Iraq, where U.S. troops continue to intervene. Have any of the anti-Muslim crowd called on the Pentagon and the CIA to oust these two official Islamic regimes, either with bombs or assassination, and replace them with Christian or Jewish or pro-Western regimes?

Nope. Not one call for a new regime-change operation. The anti-Muslim crowd continues to support the troops, who continue to fight to preserve the existence of these two official Islamic regimes. The anti-Muslim crowd continues to thank the troops for their service in Iraq and Afghanistan, which succeeded in bringing into existence two official Islamic regimes.

So, what’s really going on here?

After the Cold War suddenly and unexpectedly ended, the U.S. national-security establishment lost its official bugaboos — communism and the Soviet Union, which caused some Americans to question why it was necessary to continue devoting so much taxpayer money to fight a Cold War that was no longer in existence. To solve the problem, the Pentagon and the CIA intervened in the Middle East and began killing lots of people, many of whom were Muslims and many of whom were innocent children of Muslims (through the U.S.-enforced sanctions on Iraq).

When the inevitable “blowback” came in the form of anti-American terrorist attacks, including, but certainly not limited to, the 9/11 attacks, those people whose minds had been indoctrinated and molded into looking at communism and the Soviet Union as official bugaboos could not bring themselves to even consider the possibility that the U.S. national-security establishment was the root cause of the anti-American terrorism. By this time, the Pentagon, the CIA, and the NSA were their gods  — their everything. At the same time, given that so many of them looked upon the federal government as their provider (e.g., Social Security, Medicare, Medicaid, and other dole programs), the last thing they wanted to do is question or antagonize their welfare provider, their sustainer, their daddy, their god.

So, while U.S. officials were claiming that the terrorists just hated America for its “freedom and values,” the mindsets of some the people who, as children, had been indoctrinated and molded into seeing communism and the Soviet Union as the official bugaboos simply replaced those official bugaboos with Islam and Muslims as new official bugaboos. (Of course, Russia has now returned as a semi-official bugaboo, along with communist China, Iran, and North Korea. Vietnam, Cuba, Venezuela, and Nicaragua are probably not far behind.) The obvious contradiction between their new anti-Islam mindsets and the gratitude they express to the troops for establishing official Islamic regimes in Afghanistan and Iraq doesn’t even occur to them — or the fact that they’re obviously not out killing Muslims here in the United States who are supposedly waging a centuries-old war against them.

Once a critical mass of Americans recognizes that these official bugaboos are nothing but bunk and just a way to keep the old Cold War apparatus known as the national-security establishment (or military industrial complex) in existence and in high cotton, that will bring us ever closer to the restoration of a constitutionally limited government republic, a free-market economy, and a free, peaceful, harmonious, and prosperous society.

Jacob G. Hornberger is founder and president of The Future of Freedom Foundation. He was born and raised in Laredo, Texas, and received his B.A. in economics from Virginia Military Institute and his law degree from the University of Texas. He was a trial attorney for twelve years in Texas. He also was an adjunct professor at the University of Dallas, where he taught law and economics. In 1987, Mr. Hornberger left the practice of law to become director of programs at the Foundation for Economic Education. http://www.fff.org