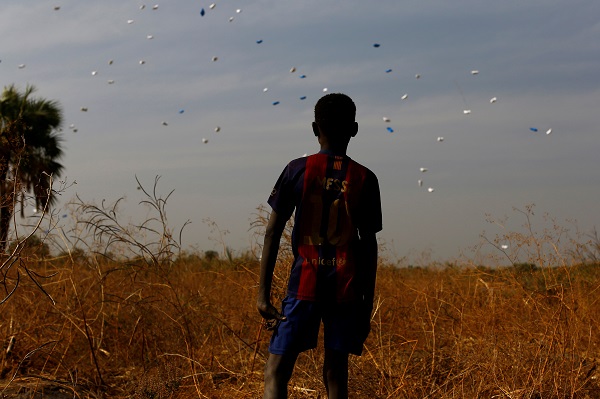 People are already starving to death in all four countries, and the World Food Programme says more than 20 million lives are at risk in the next six months.

“Time is running out for more than a million children,” UNICEF Executive Director Anthony Lake said in statement.

“We can still save many lives. The severe malnutrition and looming famine are largely man-made. Our common humanity demands faster action. We must not repeat the tragedy of the 2011 famine in the Horn of Africa.”

Famine was formally declared on Monday in parts of South Sudan, which has been mired in civil war since 2013. The conflict has increasingly split the country along ethnic lines, leading the United Nations to warn of a potential genocide.

South Sudan has also been hit by the same east African drought that has pushed Somalia back to the brink of famine, six years after 260,000 people starved to death in 2011.

UNICEF said 185,000 children were expected to suffer from severe acute malnutrition in Somalia this year, but the figure was likely to rise to 270,000 in the next few months.

Another 462,000 children are suffering from severe acute malnutrition in Yemen, where two years of war have caused economic collapse and severe restrictions on shipping.

Famine has been ongoing since last year in parts of northeastern Nigeria, where the government is fighting the militant group Boko Haram. The number of children with severe acute malnutrition is expected to reach 450,000 this year, UNICEF said.

Please remember our brothers and sisters in need and danger around the globe in your duas and consider finding a reputable local charity to help financially. Organizations like UNICEF are also ways one can be of benefit by one’s generosity. We ask Allah Most High for relief.