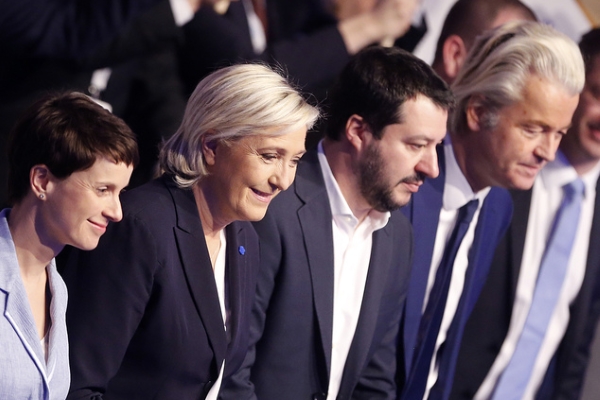 A POLL on European attitudes toward immigration, Islam and terrorism, partly disclosed this week, found that a majority of Europeans don’t want any more Muslim immigration. That is, they appear willing to support the ban which US President Donald Trump is seeking to impose in the United States, presently being challenged by the courts.

The poll, still not complete, surveyed 10,000 people in ten European states, and was conducted by Chatham House, the semi-official foreign affairs institute in Britain. Responses to the most controversial issue, on Muslim immigration, were released in summary form before the bulk of the survey. It was designed to show the temper of Europeans on the central political issues of the day: the greatest of these being immigration.

When confronted with the blunt statement “All further migration from mainly Muslim countries should be stopped,” an average of 55 percent of respondents agreed: 25 percent neither agreed nor disagreed and 20 percent disagreed.

In the United States, poll evidence suggests a similar sentiment — but generally lower support for the Trump ban. A recent Reuters/Ipsos poll found that 49 percent of Americans agreed with the order, while 41 percent disagreed. The Reuters poll also showed that 31 percent said the ban made them feel “more safe” and 26 percent said “less safe”.

The major difference is that the United States has a temporary travel ban as policy and no European country does. It’s also the case that the United States now has an administration which wants to highlight Muslims’ connection to terrorism— while in Europe, the parties on the populist right who would likely agree with that view don’t have the same degree of power. (A handful are or have been minority members of largely center-right coalitions — in Norway, Denmark and Finland.)

In Europe the mainstream politicians have tended to congratulate themselves for “taming” these groups, but taming parties whose sharp edges are rounded by the spoils of office isn’t a solution. The brief experience of the Trump presidency is that success, at least temporarily, goes to those who stay on the hard side of immigration politics.

Previous surveys show that in Europe, anti-immigration views are stronger among the less well-educated. But it’s also true that rich, well-governed countries with strong welfare states, high education levels and relatively low unemployment — such as Austria, the Netherlands and Sweden — host large and popular far-right parties, which have hostility to immigration and to Muslim communities at the center of their politics. At the same time, countries with very small Muslim communities, such as Poland and Hungary, are among the most hostile.

Politicians of the center-left and center-right have, in the past, sought to reassure voters that terrorism accounted for fewer deaths than a bad day on Europe’s roads. But such reassurances are counter-productive. People do not fear the commonplace: they fear communities which often keep themselves apart and whose radicals justify violence by pointing to the Western military interventions in Muslim states.

The more urgent question is whether or not those who support a ban on travel and immigration from Muslim-majority countries will lead nationalist parties to victory. The Netherlands’ legislative election is in mid-March: Geert Wilders’ Freedom Party, which advocates deporting Muslims, is still narrowly in the lead in the latest polls. Wilders says he doesn’t hate Muslims, but does hate their religion.

In Denmark last September, a new party of the far right — the Party of the Danes — handed out “anti-migrant” spray in the port city of Haderslev.

To describe the new far-right parties in Europe as “populist” is to categorize them as outside the pale of mainstream, liberal politics: to admit that they are popular is harder.

But they — or at least their policies — are. The dark night of fascism has not fallen on America, nor on Europe, and isn›t likely to, but fear and rejection of immigration haunts both. In 2017 Europe will show, in the Dutch, French and German elections, how dark the night can be.