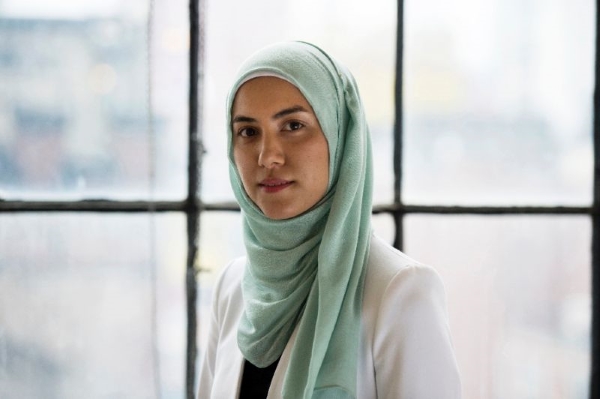 Sarah Musa, Senior Technical Design Manager at Club Monaco, dreams of creating her own label -- modest-looking fashion that will be worn by customers regardless of whether or not they are religious (AFP Photo/DON EMMERT)

Raised in Ohio by a Korean mother and a Palestinian father, Sarah Musa shocked her parents when she decided to wear the headscarf at age 17.

Today, the 33-year-old Musa works in New York as a ready-to-wear designer but dreams of creating her own label — modest-looking fashion that will be worn by customers regardless of whether or not they are religious.

Ten years into her career, she has worked for Ralph Lauren, Anna Sui, Carolina Herrera and now Club Monaco, where she is a senior technical designer.

“I’m making beautiful clothes and women can choose how they wear it,” the elegant young woman told AFP in an interview.

“I would rather buy a long top from Uniqlo than from a modest clothes brand that’s not good,” she says in reference to the genre of fashion that is sometimes referred to as “Islamic fashion.”

When she decided to wear the veil as a teenager, she says it took her Christian mother three years to accept the decision.

At that age, most teenagers just want to fit in. Wearing the veil as an American high school student was “going against everything that society is telling you,” she says.

“With all these companies saying you have to use makeup, you have to show skin, you have to dye your hair, there’s still this billion-dollar industry saying you’re never going to be good enough.”

“If I cover, I can express the power of who I want to be,” she says.

And whatever controversy wearing the veil or dressing conservatively can elicit in America, she emphasizes that “for a majority of Muslim women in the world, it’s a choice.”

At 20, Musa launched her own “modest fashion” label, Haya, but quickly put it to one side to concentrate on her studies.

She went to the prestigious Fashion Institute of Technology in New York before going to work for some of the city’s great fashion houses.

But she is still determined to re-launch her own label, having won a nationwide competition to create an Islamic veil three years ago.

“My message is not going to be religious,” she says.

She named American designer Ryan Roche, fond of pants and sleeves, or the Olsen twins’ label The Row, known for long and loose-fitting clothes, as inspirations.

“They’re extremely modest but because they’re not related to religion, people don’t see it that way,” says Musa, who covers her hair in an elegant style similar to the cloche hats of the Roaring Twenties.

In the 10 years that she has been in the industry, Musa says she has never seen another veiled woman work in big ready-to-wear labels.

Even if the fashion industry in New York is more open-minded than much of the wider American society, she remembers one job interview in which the recruiter openly ruled her out because of her headscarf.

“People are always going to hold me to different standards,” she admits. “I have to work extra hard but that’s what I signed up for when I made that choice.”

It is a difference that Musa feels even more when she leaves the microcosm of New York and goes back to her native Midwest. Since Donald Trump won the presidency, the gulf has become even more pronounced.

But her headscarf can also arouse positive reactions. One day a woman came up to tell her: “‘Your scarf is beautiful’.”

“I could take off my scarf and blend in,” she says. “I see my friends that are African American. They can’t change.”

Instead Musa sees an opportunity for Muslims “as a minority and broader community to unite and find creative ways to stand against bigotry and hate,” she says. “Fashion can be one of those ways.”