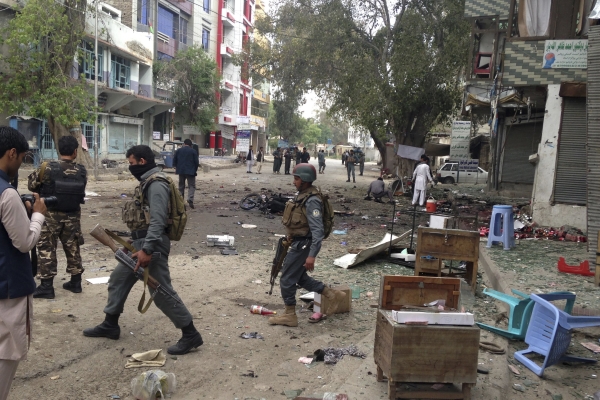 Afghan security forces members inspect the site of a suicide attack near a new Kabul Bank in Jalalabad, east of Kabul, Afghanistan, Saturday, April, 18, 2015. A security official says that dozens of people have been killed after a suicide bomber attacked a bank branch in eastern Afghanistan. (AP Photo)

A suicide bomber killed seven people and wounded 20 others outside a bank in the capital city of Afghanistan‘s Helmand province on Saturday, February 11, the governor’s office said, according to Reuters.

The bomber detonated an explosives-packed car next to an Afghan army vehicle as soldiers arrived at a bank in Lashkar Gah to collect their pay, the Helmand governor’s spokesman, Omar Zwak, said.

There was no immediate claim of responsibility but the Taliban have seized large areas of Helmand and have often threatened Lashkar Gah.

Hundreds of international troops are stationed in Helmand as part of the NATO-led effort to train and support Afghan security forces, which have struggled to contain a growing insurgency.

At least one American special forces soldier was wounded in fighting there this week.

To the north of Lashkar Gah, a local official said that an American military air strike killed a number of civilians in a recent bombing in Sangin district.

The allegation has not been independently verified.

U.S. military spokesman Captain Bill Salvin said that U.S. jets had conducted strikes in Sangin in the past few weeks.

While U.S. forces had “no evidence that civilians were killed in these strikes”, Salvin said the command would investigate the claims.

“We take every precaution to prevent and mitigate civilian casualties and we take every allegation seriously.”