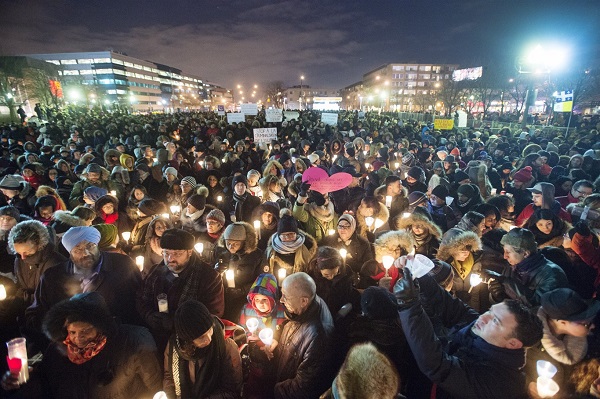 Authorities in Canada have charged Alexandre Bissonnette, a French-Canadian university student known for his far-right views, over a shooting rampage on a Quebec City mosque that killed six people.

Bissonnette faces six counts of first-degree murder and five of attempted murder, but has not been charged with any terrorism-related offences, despite Sunday’s attack being widely condemned, including by Canadian Prime Minister Justin Trudeau, as a “terrorist act” against Muslims.

When asked on Tuesday why Bissonnette was not facing terrorism-related charges, Thomas Jacques, a representative of the prosecutor’s office, replied: “The charges laid correspond to the evidence available,” said.

Prosecutors added that all of the evidence was not yet ready and Bissonnette, a 27-year-old anthropology and political science student at Laval University, was set to appear again on February 21.

Wearing a white prisoner jump suit, Bissonnette did not to speak or enter plea in the attack at the Islamic Cultural Centre during evening prayers on Sunday.

The suspect was arrested in his car on a bridge about 5km east of Quebec City centre, where he called 911 to say he wanted to cooperate with police.

Authorities, who initially named two suspects, said the other man taken into custody was a witness to the attack and was released later on Monday.

They said they did not believe there were other suspects, but were investigating. Police did not give a motive for the attack.

Francois Deschamps, an official with a refugee advocacy group, told The Associated Press news agency that Bissonnette was known to those who monitor “extremist groups” in Quebec.

He had expressed support on his Facebook profile for Generation Nationale, a group whose manifesto includes the rejection of “multiculturalism”. He also reportedly supports the French far-right party of Marine Le Pen.

“It’s with pain and anger that we learn the identity of terrorist Alexandre Bissonnette, unfortunately known to many activists in Quebec for taking nationalist, pro-Le Pen and anti-feminist positions at Laval University and on social media,” Deschamps wrote on the Facebook page of the Welcome to Refugees group.

More than 50 people were at the Quebec Islamic Cultural Centre when the shooting erupted.

In addition to the six dead, 19 people were wounded – all men. Of the five victims who remained in hospital, two were in critical condition, authorities said. The dead ranged in age from 39 to 60.

Canada is generally welcoming toward immigrants and all religions, but the French-speaking province of Quebec has had a long-simmering debate about race and religious accommodation.

The mosque where the shooting took place on Sunday was targeted once before in an Islamophobic attack. Last year, a pig’s head was left on its doorstep, alongside a note that read, “bon appetit”. Eating pork is forbidden in Islam.

According to Haroun Bouazzi, co-president of the Montreal-based rights group AMAL-Quebec, the list of Islamic places of worship and Muslim-owned businesses in Quebec that have been targeted by hate crimes in the last three years is endless.

Mosques have been set ablaze and vandalised, and schools and halal butcher shops have been shot at, but in many instances, police have not labelled the attacks hate crimes, Bouazzi said.

“There are institutions, whether they are political or security-based, that closed their eyes to, that under-estimated, and that even in some cases were complicit with, an absolutely unacceptable situation for a religious minority in Quebec,” he told Al Jazeera.

“We hope that what happened [in Quebec City] will be a wake-up call for everyone, that finally, we will take this situation more seriously.”

Trudeau said in parliament the victims were targeted simply because of their religion and spoke directly to the more than one million Muslims who live in Canada, saying, “We are with you”.”

“Thirty-six million hearts are breaking with yours,” Trudeau said. “Know that we value you.”

The prime minister later attended a vigil outside the mosque.