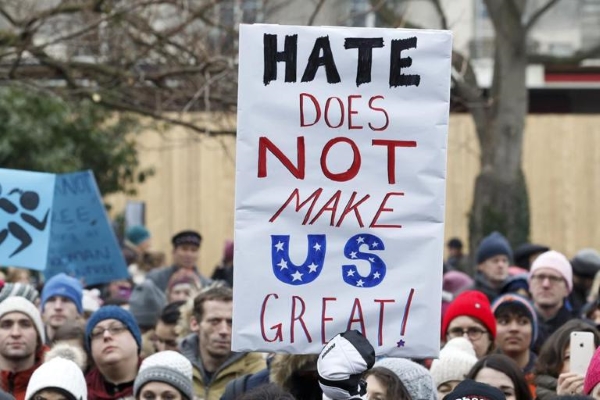 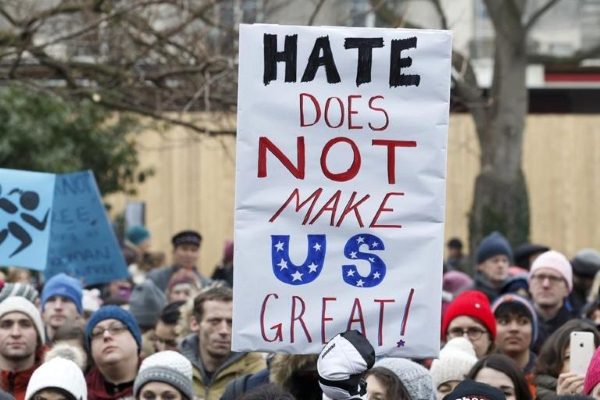 President Trump is expected to announce a ban on Muslim immigrants into the United States. However, polls conducted in the last year show that, despite his electoral success, Trump’s views on Islam and Muslims do not have wide support among the American public.

Americans’ opposition to accepting refugees from Middle East conflicts have been highly exaggerated. As I noted last June, “even in the middle of a U.S. presidential campaign that has been breathtaking in its exaggerations and racism, with devastating terrorism providing fuel, 59 percent of Americans say they are ready to accept Middle East conflict refugees” assuming they are screened for security. As usual, Americans were deeply divided along partisan lines on this issue.

Four polls during the election year revealed extraordinary, progressive and unexpected shifts that cannot be explained by events during that year. Attitudes toward “Muslim people” became progressively more favorable from 53 percent in November 2015 to 70 percent in October 2016.

This kind of large shift does not normally take place in one year unless there are extraordinary events taking place. In fact, there were some consequential events that would have led one to expect the opposite shift: terrorism in the name of Islam in San Bernardino and Orlando, as well as a heated campaign year during which the Republican candidates, and many of their supporters, voiced much anti-Muslim rhetoric.

So, how are these kind of shifts possible in a single year?

One hint comes from the partisan divide on these issues. Almost all the shifts came from Democrats and independents, not Republicans. Among Democrats, the shift was significant enough to impact overall results. Favorable attitudes toward Muslims improved from 67 percent to 81 percent. Favorable attitudes toward Islam went from 51 percent to 66 percent.

As on almost all issues, partisan divisions intensified during a highly divisive election year. The more one side emphasized the issue — as happened with Trump on Islam and Muslims — the more the other side took the opposite position.

After fleeing war in Syria and living in Jordan for two years, the Jbawi family came to America through the U.S. Refugee Resettlement Program. They are optimistically building a new life in Baltimore while keeping an eye on the national conversation about Muslim refugees. (Zoeann Murphy/The Washington Post)

But there was another related aspect that intensified reaction. Because Middle East-related issues touched on Americans’ top priority issue (fighting the Islamic State ranked first across the political spectrum throughout the year), the stakes for politicians and opinion leaders were especially high. For Democratic politicians, ceding the narrative to Republicans on these issues meant losing the election battle.

Everyone had a greater incentive to put forth a counternarrative, from the leading candidates, Hillary Clinton and Bernie Sanders, to President Barack Obama. This counternarrative, reinforced by sympathetic opinion leaders, added more weight to the sharp divide and may have had impact not only on Democrats, but also on independents.

Sure, there are demographic trends favoring the Democrats on these issues: expanding segments of the American public — such as millennials and Hispanic, Asian, and African Americans — tend to have more favorable views on Islam and Muslims. But the impact of these trends cannot be felt in one year, which suggests that the dynamics articulated above are the principle causes.

So what does this suggest about the impact of Trump’s presidency on public attitudes?

There will almost inevitably be an assault on dominant narratives on both the Palestinian-Israeli issue and on Islam and Muslims. The question is: How will this play out? What’s the chance it will succeed in changing public attitudes? What could be learned from the past year?

At some level, despite the uniqueness of Donald Trump, there are some similarities with the time when the administration of George W. Bush took over after two terms of Bill Clinton. In the months prior to 9/11, Bush pursued a policy that pushed against many of his predecessor’s policies. He gave more license to Israel in its confrontation with the Palestinians, lowering that issue in American priorities, and many of his supporters advocated a view of Islam and Muslims that’s more compatible with notions of civilizational clash. But, even though Democrats were on the defensive, it’s unlikely that the effort would have succeeded without the 9/11 disaster that enabled reshuffling the political deck, and mobilized almost all Americans behind the White House in its immediate aftermath.

Public support for Trump’s campaign to ban Muslim immigrants from the United States is dependent on Trump’s own popularity and policy success and on the groups and leaders who have incentive to counter that narrative. What is already clear from the presidential transition and the first few days of the Trump administration is this: Partisanship did not die, or even diminish, immediately after the election. And polls show the president starts his term with unprecedented unpopularity.

Evidence suggests that during the election year, attitudes of most Americans toward Islam and Muslims improved overall precisely because Trump the candidate was seen to have the opposite view. Trump the president should have more sway. But he is starting at place where partisanship is not diminishing, and where his presidential rhetoric mirrors his words as a partisan candidate.

The incentive to counter Trump’s views could not be missed in the historic Women’s March the day after the inauguration. And Trump has managed to alienate not only the media, but also many members of Congress, by attacking the Washington establishment in his inaugural speech. In this environment, the impact of narratives pushed by groups that draw empowerment directly from Trump’s success could be limited — or even generate the opposite results.

We are at the beginning of the administration — and things could change quickly. However, the partisan rhetoric of the campaign is not diminishing and seems unlikely to be overturned without an extraordinary crisis; and the incentive for leaders and groups to advance counternarratives to those of Trump’s supporters remains high.

The Trump era is like no other, in part because the president himself is like no other. But the very fact that he started his administration sounding more like a candidate than a president means that his ability to empower major paradigmatic shifts in American public attitudes will be limited, at least in the short term.

Shibley Telhami is the Anwar Sadat Professor for Peace and Development and the Director of the University of Maryland Critical Issues Poll. He is also a nonresident senior fellow at the Brookings Institution.