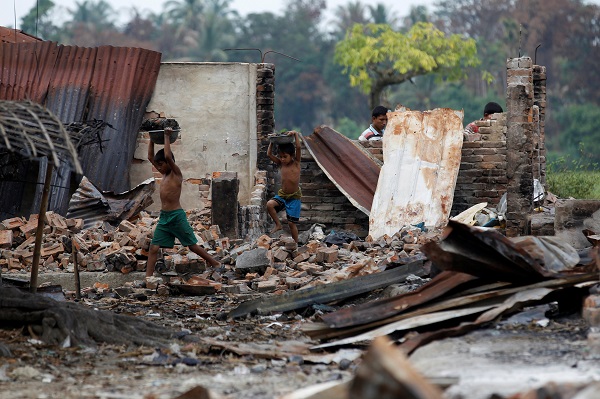 Children recycle goods from the ruins of a market which was set on fire at a Rohingya village outside Maugndaw in Rakhine state, Myanmar, October 27, 2016. REUTERS/Soe Zeya Tun

ASEAN’s non-intervention is aggravating the plight of ethnic Rohingya Muslims suffering widespread abuse by the Burmese military in Myanmar’s Rakhine State. The Rohingya are one the of the world’s most persecuted ethnic minorities.

Human Rights Watch reported the Burmese military launched a campaign of killings, rape and arson against ethnic Rohingya following attacks by militants against government border guards in Rakhine State on October 9, 2016. HRW reported in December that, since the day of the attack, at least 1,500 homes have been burned in retaliation, displacing thousands of Rohingya people.

The United Nations has expressed concern about the military operations against the Rohingya. One UNHCR official reportedly called the attacks “ethnic cleansing”. The UN Special Rapporteur on human rights, Yanghee Lee, is visiting Rakhine State. But the Myanmar government is denying her access to some areas and reportedly only allows her to speak with individuals it has pre-approved.

In a closed-door meeting in Yangoon in December, ASEAN’s foreign ministers discussed the violence following the October attack. But they avoided talking about the issue in human rights terms.

Among leaders of ASEAN member states, only Malaysia’s prime minister, Najib Razak, has condemned the violence in Myanmar. He described the military operations as “genocide”.

In Indonesia, despite pressure from rights groups and Muslim groups in the country, President Joko Widodo stopped short of condemning Myanmar, but offered humanitarian aid to Rohingya refugees.

The persecution of ethnic Rohingya is a regional and global problem. Thousands of stateless Rohingya fleeing persecution end up in refugee camps in Bangladesh or become victims of human trafficking. They have been held ransom in death camps in Thailand and Malaysia, and sold to work in plantations or on fishing boats.

In 2015, a crackdown against human traffickers in Thailand prompted traffickers to abandon their boats. Thousands of Rohingya and Bangladeshi migrants were left stranded in the Andaman Sea. The plight of the Rohingya people hence become a regional problem, sparking debate among Southeast Asian leaders.

Where do Rohingya belong?

Historically, the Rohingya people have inhabited Burmese lands for hundreds of years. This dates back to before the British colonial age in Myanmar, which began in 1824. But the Burmese mostly still view the Rohingya as illegal immigrants from Bangladesh.

When Myanmar gained independence from the British in 1948, it enacted a citizenship law that excluded the Rohingya people as one of the country’s many ethnicities. Almost 140,000 Rohingya people have been displaced and between 800,000 and 1.3 million Rohingyas are without citizenship.

Bangladesh, which borders Myanmar, also does not accept them, although thousands have escaped and sought refuge in Cox Bazaar, a border town within the country.

Myanmar has insisted that the problems in the Rakhine State are a domestic matter. Within ASEAN, countries commonly refrain from intervening in domestic issues.

But ASEAN’s state-centric nature has prevented the regional organisation from protecting the rights of all people in the region.

The ASEAN Intergovernmental Commission on Human Rights (AICHR), the main human rights institution in the region, could not even form an investigation committee to look into the problem. This is because, according to AICHR’s Terms of Reference, the commission does not have any mandate to carry out such an investigation. Any decision made by the commission should be accepted by all state representatives.

Talks among ASEAN leaders are often limited to political and economic issues, pushing problems with deep social and cultural roots like the persecution of ethnic Rohingya to the margins.

This should not be the case. Since 2015, ASEAN member states have agreed to establish the ASEAN Socio-Cultural Community, with the aim of forging a common identity and building a caring and sharing society in the region. ASEAN states adopted the ASEAN Vision 2025, which put forward the idea of a “people-centred” and “people-oriented” ASEAN in the upcoming decade.

Forging a common platform for socio-cultural regionalism should not leave out state protection of human rights. The UN Universal Declaration of Human Rights proclaims that the state bears responsibility to protect basic individual rights. Therefore, the idea of an ASEAN that’s people-oriented must go hand-in-hand with the protection of human rights.

Yet, to date, ASEAN member states have not discussed a “people-oriented” mechanism to resolve the Rohingya crisis.

ASEAN member states should discuss the crisis in the upcoming ASEAN summit in the Philippines. ASEAN should combine these diplomatic talks with non-state initiatives, such as advocacy networks and humanitarian organisations.

We could learn from community initiatives in dealing with the Andaman Sea crisis in 2015. When governments were slow to rescue Rohingya and Bangladeshi people languishing on boats off the coast of Indonesia’s Aceh province, the local fishing community saved them from drowning. NGOs gave the refugees shelter. The strong role of non-governmental organisations and community-based initiatives to deal with humanitarian issues prompted the governments to sit down and find a solution.

ASEAN has equipped itself with various institutional mechanisms that encompass political security, economic, social and cultural dimensions. This means that ASEAN should not only deal with matters relating to economic growth and a free ASEAN market. It should also tackle issues relating to multiculturalism, be that religion, national identity, or ethnicity. Otherwise, we will only be waiting for Godot to end the persecution of ethnic Rohingya.