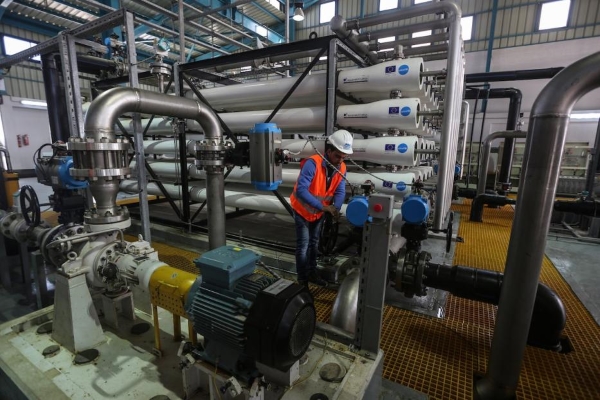 DEIR EL-BALAH, GAZA STRIP – International aid workers on Thursday opened a new desalination plant in the Gaza Strip, bringing some relief to a territory where 97 percent of the water is undrinkable.

It is the Hamas-ruled territory’s second and largest desalination plant. While it will not solve Gaza’s water woes, officials said the project marked an important step.

“Despite the small production, this gives symbolism to Gaza residents that the train of water solution is now on track,” said Monzer Shublaq, director of Coastal Municipalities Water Utility in Gaza.

The plant will initially produce 6,000 cubic meters of water a day, a small fraction of Gaza’s needs. In all, the population uses 150,000 cubic meters a day, most of it from a depleted coastal aquifer.

The European Union said it invested 10 million euros, or $10.6 million, in building the plant with UNICEF. It has pledged a similar amount for a second phase meant to double capacity by 2019.

“We are falling far behind the demand for clean drinking water for Gazans. The situation today is really very serious. This is one step forward on a very big journey and we need to have a lot more projects like this,” he said.

Conditions have greatly deteriorated over the past decade since Hamas, a militant group sworn to Israel’s destruction, took power. Hamas and Israel have fought three wars since the 2007 takeover, resulting in heavy damage to Gaza’s infrastructure, and an Israeli-Egyptian blockade has slowed reconstruction efforts.

Hamas, an Islamic militant group boycotted by most of the international community, did not participate in the project, and it was not represented at Thursday’s ceremony.

A Hamas military training site sits on part of the land allocated for the plant’s second phase. Mazen Ghunaim, head of the Palestinian Water Authority, said Hamas promised the site will be moved away in the coming days. The authority is one of the few bodies run by the rival West Bank-based Palestinian Authority that Hamas allows to operate in Gaza.

Other obstacles have included chronic electricity shortages and concerns that the plant could be hit if there is new fighting between Israel and Hamas.