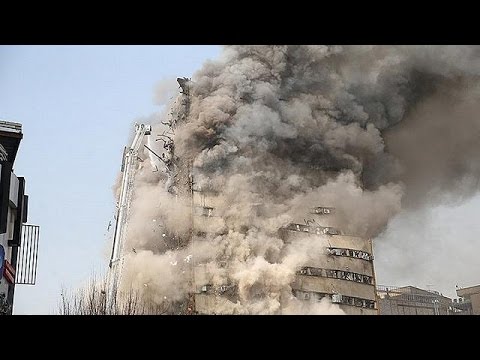 At least 20 firefighters died after a high-rise building in downtown Tehran caught fire and collapsed, the semiofficial Fars News Agency cited the mayor of the Iranian capital as saying.

Firefighters battled the blaze for several hours on January 19 before the 17-story Plasco building came down as state TV was broadcasting live.

Tehran Mayor Mohammad Bagher Ghalibaf told state television that up to 25 firefighters were thought to be inside when the building fell.

State television reported that “at least 38 people were injured and hospitalized but most of them have been discharged,” while IRNA said 45 firefighters were injured as they rushed to evacuate the building.

Reports said the Plasco building, close to the Iranian capital’s sprawling bazaar in the city center, had been evacuated before it fell to the ground.

“It was like a horror movie,” Reuters news agency quoted a local grocery shop owner as saying.

Police cordoned off Jomhoori avenue, which passes by the building, as well as the nearby British and Turkish embassies, reports said.

Completed in the early 1960s, the Plasco building was among the first high-rises built in Tehran and included a shopping center and clothing workshops.

The building “had caught fire in the past,” Tasnim news agency reported, while fire department spokesman Jalal Maleki said it was known to breach safety standards.

“Even in the stairwells, a lot of clothing is stored, and this is against safety standards,” he told state television. “The managers didn’t pay attention to the warnings.”

With reporting by Reuters, AP, dpa, and AFP