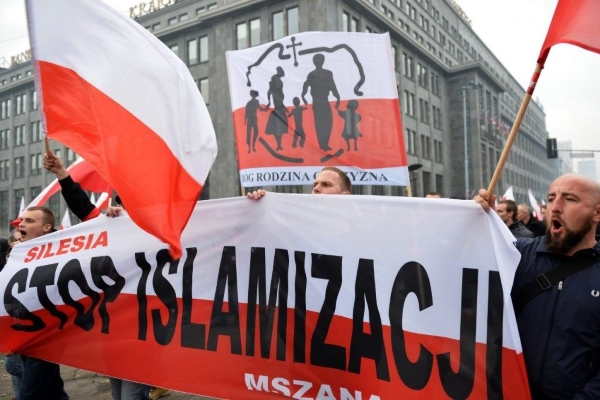 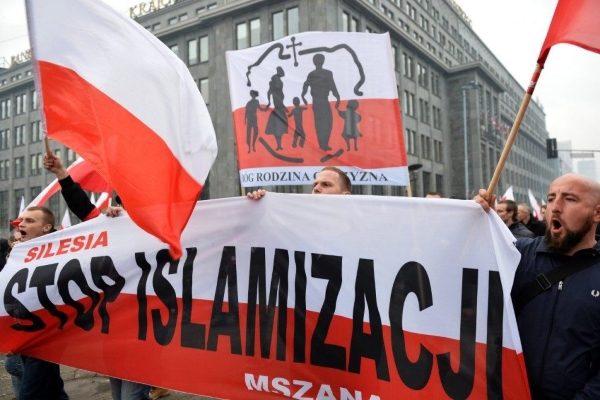 By: KASIA NARKOWICZ and KONRAD PEDZIWIATR

The recent Ipsos survey Perils of Perception showed that most countries believe their population is much more Muslim than it actually is. But the Poles emerge as the unquestionable leader in these overestimations. Although Muslims make up only around 35,000 of a 38 million population, Poles believe that their number is actually 2.6 million, which would make the Polish Muslim population one of the largest in the European Union after France, Germany and the UK.

Furthermore, Poles believe that the number of Muslims in the country will grow to up to 13% by 2020. If this were to happen the Muslim population in Poland would have surpassed not only that of Italy, Spain and the Netherlands but even the British which has grown dynamically in the last decade.

If this were to happen, Poland would need to experience a huge wave of Muslim migrants or massive processes of conversion. In reality, both phenomena are quite unthinkable not least because Poland has blocked the entry of refugees and done little to challenge the unprecedented rise of Islamophobic attacks within its borders in the last couple of years.

Poland is currently one of the most religiously and ethnically homogenous countries in Europe and judging from the politics of the conservative government that came to power in 2015 the country is heading towards less, not more, diversity. But that is not what the Polish population believes.

Interestingly, the number of Muslims in Poland is one of few estimations the Poles got so wrong in the Ipsos survey. In contrast, Poles scored much better than people in France, Hungary, Spain, Japan or Belgium when it came to their perceptions of other phenomena. So why the sudden and so exaggerated moral panic over Muslims? Looking back historically, we know this is a recent phenomenon.

Islam has a long history in Poland dating back to the fourteenth century with little recorded hostility towards the then quite sizable Muslim minority. Before Poland disappeared from the maps of Europe at the end of the eighteenth century it was home to almost 30 purpose-built mosques and prayer houses.

At that time, Poland was ethnically and religiously diverse with significant groups of Tatars, Jews, Armenians, Ukrainians and Germans living side by side with Poles and Lithuanians. After the Second World War, only about 10% of the Muslim settlements stayed within the new Polish borders and the country became one of the most religiously homogenous countries in Europe.

During Communism, a significant number of Muslim students came to Poland from ‘befriended’ socialist countries in the Middle East, thus contributing to a small revival of Islam. Today, while Polish Muslims are small in numbers they are a diverse mix of communities from Tatars, former students from Arab countries who settled in Poland and recent converts. Unfortunately, this long and vibrant history of Islam in Poland is forgotten in the current discourse on Islam and Muslims in the country.

Why are Poles so wrong about Muslims in their country?

The exaggeration of the size of the Muslim community in Poland is tied with political changes in the country in the last couple of years and increasingly divisive nationalistic rhetoric around the imagined presence of Muslims in the country. The 2015 elections won by the right-wing Law and Justice party opened up a space in Parliament to members of the far right National Movement.

Politicians have frequently invoked Islamophobic rhetoric, empowering far-right groups and contributing to a climate where not only Islamophobia, but also anti-Semitism, homophobia, sexism and other expressions of hate seem permissible. This in turn empowered far-right groups that organised several anti-refugee and anti-Muslim demonstrations in 2015 in cities that are home to Muslim minorities such as Białystok. Wrocław, Gdańsk and Kraków.

While Muslims were previously disliked as an ‘external enemy’ and usually mentioned in the context of terrorist attacks abroad or through the Polish involvement in military invasions in Iraq and Afghanistan, the figure of the Muslim as a dangerous Other slowly transformed to an ‘internal enemy’ who was supposedly posing a threat to Poland.

The refugee crisis helped in cementing views that Muslims were taking over Europe. It mattered less that this was predominantly an imaginary threat as the substantial inflow of migrants and refugees to Poland has not taken place. The new Polish government has been particularly reluctant in opening its borders to refugees and as such, Poland did not experience a ‘migration crisis’ and was never even a transit country for refugees.

And yet Poles believed in the divisive rhetoric of many of its leaders about an imagined inflow of Muslims. Why? The media bombardment of stories about a Muslim invasion certainly fueled some of the misconceptions. Several conservative mainstream Polish news outlets in Poland published front cover images depicting Poland being ‘flooded’ by Muslims, for example carrying bombs, and drawing parallels to a famous image of Nazi invasion of Poland in the 1930s, with Muslims now being portrayed as German soldiers.

In contrast to other European countries where Islamophobia is on the rise, Poland’s minorities are too small a group to challenge these false ideas. Instead, they have painfully felt the country’s’ increasing hostility towards all forms of Otherness. Our research on Islamophobia in Poland has confirmed that there has been an unprecedented rise in anti-Muslim sentiments resulting in attacks on individuals, mosques and places of business such as kebab shops (for a detailed chronological review of recent attacks see the European Islamophobia Report 2015 and the forthcoming 2016 report).

According to Association Never Again (Nigdy Wiecej) the numbers of homophobic, racist or xenophobic incidents per month drastically shot up from around 20 a month to 20 a week. In recent years we have also observed a particular focus with Muslim women at the centre of both far-right and liberal anti-Muslim agendas.

During 2016, frequent news of verbal or physical attacks on Muslims or ‘foreign-looking’ people, including women wearing the hijab, in different parts of Poland circulated on social media platforms and in independent media. Since the current government abandoned the only government body committed to tackling racial discrimination and refused to institutionally tackle the growing number of hate crimes it is largely up to the civil society to do the work of reporting and resistance.

While there are individuals within the Polish government that are critical of the rise of anti-Muslim attitudes and attacks in the country, the main resistance happens on the grassroots level.

Within the Polish civil society there are several groups that work on behalf of minorities that feel increasingly targeted. Solidarities across difference have increased particularly since the 2015 elections, including ethnic minorities, women and LGBTQ groups joining together in various initiatives.

One of the oldest and most prominent organisation that has been monitoring and reacting to instances of hate crime for many years now is the Association ‘Never Again’ (Stowarzyszenie Nigdy Więcej) first registered in 1996. Their ‘Brown Book’, published every couple of years or so due to limited or no financial support has systematically reported cases of hate crime in Poland.

Other significant grassroots initiatives are the Centre for Monitoring Racist and Xenophobic Behaviours (Ośrodek Monitorowania Zachowań Rasistowskich i Ksenofobicznych), the Coalition Against the Hate Speech (Koalicja Bez Nienawiść) and Hate Stop (Hejtstop). Several members of the Muslim community in Poland are collaborating with these groups as well as making a significant effort to tackle, challenge and change the narrative on Islam in Poland.

Yet despite common believes among Poles, Polish Muslims are not many and challenging hostile public discourses supported by the authorities is a challenge that cannot be overestimated.

Kasia Narkowicz is a post-doctoral researcher at the University of York. She works on issues around race, citizenship and the State in the context of the War on Terror and on issues around Islamophobia and gender in Poland.

Konrad Pędziwiatr is Assistant Professor in the Department of European Studies at Krakow University of Economics in Poland. He has published widely on Islam and Muslims in Poland, wider Europe and the Middle East and is the author of the Islamophobia in Poland reports.