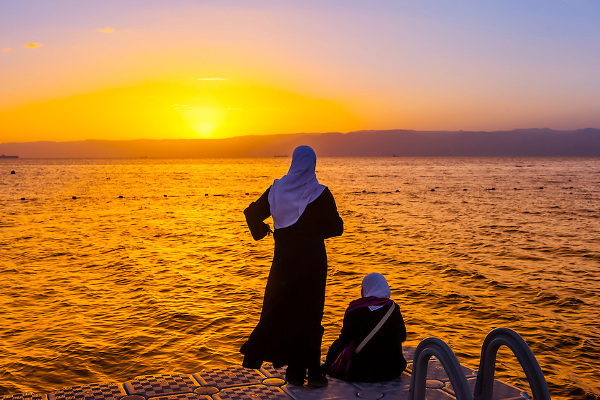 Glory to Allāh and Salutations on Rasulullāh Sallallāhu ‘alayhi wasallam

Hayā (modesty/meekness/shyness) is an integral attribute of Imān. The healthier the Imān, the greater will be the quality of Hayā in the Mu’min. While the attribute of Hayā is common to both Muslim males and females – or should be common – it is most profound in Muslim women of Taqwā.

The quality of meekness is such a lofty virtue of the Muslim woman that Allāh Ta’ala highlights it in the Qur’ān. Describing the noble and beautiful demeanour of the daughter of Nabi Shuayb (‘alayhis Salām), the Qur’ān Majeed states: “Then one of the two (daughters of Nabi Shuayb) came to him (Nabi Musa) walking bashfully. She said: “Verily, my father calls you…….” (Surah: Al-Qasas, āyat 25)

Nabi Shuayb (‘alayhis Salām) who had no son sent one of his daughters to call Nabi Musa (‘alayhis Salām) who at the time was a wayfarer without home. She came walking very bashfully, and with lowered head from a respectable distance, delivered her father’s message. Hadhrat Musa (‘alayhis Salām), whose Hayā was profound, requested her to walk behind him at a distance. He told her to take a few pebbles. When he had to turn to the right on the way to the home of Nabi Shuayb (‘alayhis Salām) of which he was unaware, she was to throw a pebble towards the right, and the same if he had to turn left from the pathway. His Hayā and Purdāh dictated that she should not direct him with her voice. This was the lofty degree of Hayā and Hijāb.

Thus, the Qur’ān Majeed makes special mention of the daughter’s Hayā, describing her walk with the term isthyā’ which means ‘bashfully’. She was an embodiment of pure bashfulness and modesty.

The Hayā of Hadhrat Fatimāh (radhiyAllāhu ‘anha) was so lofty and so wonderful and so profound that her last wish and wasiyyat (bequest) became the Sunnāh for all Muslim women until the Day of Qiyāmah. She instructed that on her death, despite the female’s body being draped with six shrouds, a purdāh (barrier) be put up over her body to ensure that no male even accidentally casts a gaze on her wrapped up body. Furthermore, she instructed that she be buried in the darkness of the night. This was an added measure of purdāh dictated by her Hayā.

Six shrouds covering the dead body, but still she ordered the erection of a barrier to conceal even her dead, covered body. This Sunnāh remains to this day when females are buried and will remain until the Day of Qiyāma, inshaAllāh.

While this practice prevails today at the time of the death of a Muslim woman, the story is totally different when she is alive. Today’s ‘Muslim’ women who have been educated in western educational institutions, having jettisoned almost every vestige of their Imāni Hayā, surpass even non-Muslim women in the display of audacity and immodesty. The reason for their vile state of meeknesslessness from the Islamic perspective is that all moral attributes have opposites. When one is displaced, there is never a vacuum. The opposite sets in. When Hayā is eliminated, then immodesty and immorality overwhelm the one who at one stage was a repository of meekness and modesty.

Today a Muslim woman’s hijāb and niqāb are being reduced to shreds, thanks to the WhatsApp, Facebook and other social networks. Daughters, sisters, wives and even mothers of some of us have started uninhibitedly interacting and chatting with ghair-mahrams, are freely watching their (ghair-mahrams’) pictures and posting their own so that the ghair-mahrams of the world can feast upon them. To look at a woman with lust constitutes the zinnāh of the eyes. What about the Muslim women who candidly post their pictures (and those of their kin and friends) in the social networks? Don’t they become accomplices in the sin committed by those watching these pictures?

Islam has made hijāb a symbol of honour and dignity for women. Hijāb has been ordained by Allāh, and not by some individuals, as a number of Muslims with warped viewpoints about Islam would have us believe. One such Muslim writer has this to say in an article about hijāb:

“To wear the hijāb is certainly NOT an Islamic obligatory on women. It is an innovation (Bid’ah) of men suffering from a piety complex who are so weak spiritually that they just cannot trust themselves!”

This statement clearly points to one undeniable fact: the writer’s ignorance about what Allāh demands from the believing women as far as her Hayā is concerned.

Such writers have views similar to those of their none-Muslim counterparts from the West who say hijāb subjugates and oppresses women. However, what they say is in stark contrast to the reality. A hijāb/niqāb/chādar accords our mothers, sisters, daughters and wives the respect and the dignity they deserve. What respect, dignity, and human right does the west offer women by allowing them to be openly flaunted in front of any stranger? Islam protects them from evil eyes and designs of men with sinister motives and grants them an elevated rank, dignity and such honour that no one has ever granted them in the entire human history.

Allāh Ta’ala states in the Qur’ān: “…And the women should not strike their feet (I.e. walk in such a way) so that attention is drawn to their hidden beauty…” (Surah an-Nur Ayat 31).

I.e. they should not strike their feet in such a way that their anklets and other ornaments of beauty become manifest before men. Hence when a woman has been prevented from striking her feet (walking in such a way which would attract the attention of the ghair-mahram men towards her hidden beauty), then what can be said about their moving around in the streets, in the market places and the social halls with their faces uncovered or without a hijab? This clearly indicates that Allah desires women to be in hijāb/niqāb/chādar to avoid the lustful gazes of ghair-mahram men.

Allāh Ta’ala has created woman for the home role, not for the public stage. She moves in conflict and unnaturally when she takes to the public stage and the streets to rub shoulders with men and to compete with them in worldly and secular matters.

Hayā is of primary importance in preserving the moral fibre of any society. That is why Hayā has been called the fortification of a woman. It protects her from many sins and prevents ill-intentioned men from daring to have evil thoughts about her.

May Allāh guide our sisters to emulate the pristine qualities of our Sahābiyat, Āmeen