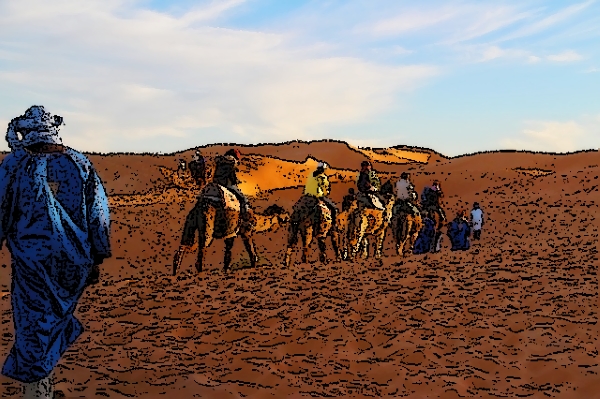 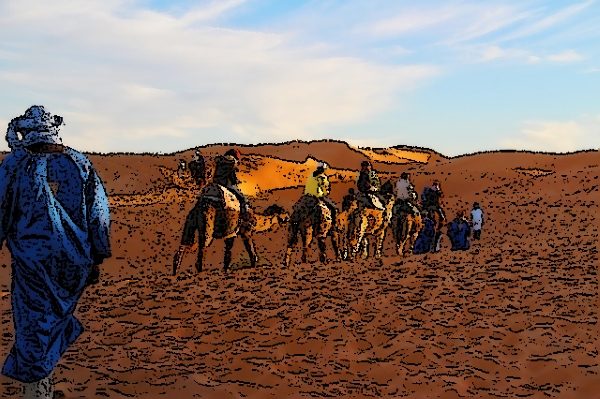 When it comes to globetrotting, even Marco Polo takes a back seat to this fourteenth-century voyageur.

In the year 1349 a dusty Arab horseman rode slowly toward the city of Tangier on the North African coast. For Ibn Battuta, it was the end of a long journey. When he left his home in Tangier 24 years earlier, he had not planned to travel distant roads all during the years that took him from young manhood to middle-age. From his mount, Ibn Battuta surveyed the white spires and homes of Tangier spreading in a crescent along the Atlantic Ocean. He tried to remember how the city had looked when he left it behind almost a quarter-century ago.

In 1325 Ibn Battuta had been a young man of 21, reluctantly leaving his parents to make his first hajj, or pilgrimage, to Mecca some 3,000 miles due east. He had covered those 3,000 miles and then had gone on to travel another 72,000 miles! Many Muslims made the pilgrimage to the Holy City but then returned home, for it was not an age when people were accustomed to straying from home for long periods. When Ibn Battuta began his travels, it was, in fact, more than 125 years before such renowned voyagers as Columbus, de Gama and Magellan set sail. It was no wonder, then, that Ibn Battuta returned to his native city, where his parents had died in his. absence, to find himself a famous wayfarer. A contemporary described him as “the traveler of the age,” adding’ “he who should call him the traveler of the whole body of Islam would not exceed the truth.”

Ibn Battuta was indeed the traveler of his age. His wanderings took him to Spain, Russia, Turkey, Persia, India, China and all the Arab lands. His description of the religious, political and social conditions of the lands he visited – in some cases the only record – give insight into medieval Eastern civilization. Authorities who estimate Ibn Battuta’s journeys at more than 75,000 miles say that the distance was not exceeded by anyone-including Marco Polo, Magellan or Columbus-until the age of steam.

Travelers have many reasons for visiting foreign lands. Marco Polo was a merchant and Columbus an adventurer. Ibn Battuta, however, was a theologian, poet and scholar, a humanitarian in an age when life was cheap. He left Tangier to visit the holy places of his faith and found himself curious about the wide world and eager to learn more about it.

Born in 1304, the son of Abdallah, a qadi, or local judge, Ibn Battuta as a young man received a future qadi’s customary education, essentially a thorough study of religious literature and poetry. He is, in fact, the only great traveler to describe some of the places he visited in rhymed verse. His style (translated without rhyme) can be imagined from his description of the Cairo of 1326: “I arrived at length at Cairo, mother of cities and seat of Pharaoh the tyrant, mistress of broad regions and fruitful lands, boundless in multitude of buildings, peerless in beauty and splendour, the meeting place of comer and goer, the halting place of feeble and mighty, whose throngs surge as the waves of the sea, and can scarce be contained in her for all her size and capacity.

“On the Nile,” noted the amazed traveler, “there are 36,000 boats belonging to the Sultan and his subjects.”

From Cairo Ibn Battuta toured through Jerusalem, Aleppo and Damascus, where he joined a caravan of pilgrims bound for Mecca. These caravans were a familiar sight in Islam. They consisted of Muslims, rich and poor, ignorant and educated, soldier, merchant and scholar, who were fulfilling the duty of every Muslim to visit Mecca at least once in his lifetime if possible. In the towns and cities along the way they were fed, sheltered and entertained in rest houses and hospices maintained by generous benefactors. This traditional hospitality-which in Arab countries extends to all guests-made it possible for Ibn Battuta, who was not rich, to travel with a light purse.

He made the hajj to Mecca seven times. The second time he stayed in the city three years to study with the great Muslim scholars. This pilgrimage was preceded by a tour of Persia, including a visit to the then fabled capital of Islam, Baghdad, where he found public baths that were unmatched anywhere in the world. “Each establishment,” wrote the traveler, “has a large number of private bathrooms, every one of which has also a washbasin in the corner, with two taps supplying hot and cold water. Every bather is given three towels, one to wear round his waist when he goes in, another to wear round his waist when he comes out, and the third to dry himself with.”

At the end of three years of study in Mecca, Ibn Battuta set out for India, where he hoped to join the court of the powerful and generous Sultan of Delhi. By this time he had made it a rule “never, so far as possible, to cover a second time any road.” He went to Jiddah, Mecca’s nearest port, where he turned down passage on a ship he considered unsafe. “This was an act of providence,” he recalls, “for the ship sailed and foundered in the open sea, and very few escaped.”

After touring through Egypt, Syria, Turkey and Russia, Ibn Battuta finally reached Delhi, where he remained in the sultan’s service as qadi for eight years. At the end of this time the sultan called him. “I have sent for you to go as my ambassador to the lung of China,” he said, “for I know your love of travel.” The trip was to be a memorable journey.

No sooner had Ibn Battuta left Delhi than he was taken prisoner by unfriendly Indians. They marked him for death, but one of the band, a young man, took pity on him and let him escape. After eating roots and nuts and hiding out in strange countryside for eight days, Ibn Battuta finally rejoined his entourage and proceeded to Calicut, a trading port near the tip of India from which he planned to sail to China.

“We entered the harbour in great pomp, the like of which I have never seen in those lands,” he noted, “but it was a joy to be followed by distress.” Then he describes the great Chinese junks that monopolized traffic to China.

The large junks had three masts and up to twelve sails, which were “never lowered, but turned according to the direction of the wind.” Three smaller vessels usually accompanied the junks to tow them if they became becalmed. The junk was the fourteenth-century equivalent of the modern ocean liner. It even carried its own fresh food: “The sailors,” notes Ibn Battuta, “have their children living on board ship, and they cultivate green stuffs, vegetables and ginger in wooden tanks.”

In Calicut Ibn Battuta loaded his party and the presents for the Chinese emperor on a junk. His own belongings were put onto a smaller vessel called a kakam. The junk, as it made its way from the harbor, was caught by a sudden gale which whipped up the sea and dashed the ship onto shoals. All was lost. The smaller kakam then sailed away with all of Ibn Battuta’s goods. He watched the kakam grow smaller in the distance with nothing to his name but ten dinars and the carpet he had slept on.

From past experience with foreign rulers, he wisely decided not to return to Delhi, for while the sultan was a generous man, Ibn Battuta reasoned that he might not have understood why of all the treasure and envoys, only Ibn Battuta remained intact! So the stranded ambassador, with the typical resourcefulness of a seasoned traveler, attached himself to a local Muslim potentate who appointed him qadi in the nearby Maldive Islands. Ibn Battuta’s description of the customs of these islands was the first to reach the outside world.

When Ibn Battuta finally sailed again for China, he landed at Zaytœn, the storied “Shanghai” of the thirteenth and fourteenth centuries, which may have been what is today the island of Amoy, opposite Formosa. He traveled through China as an ambassador, although he actually represented no one and was without credentials. Despite the fact that the Muslim and Chinese empires were not on the friendliest terms, Ibn Battuta journeyed from Zaytœn to Hangchow and Peking and back without any difficulty. On the contrary, he was feted in most places, a testimony to his charm and native diplomacy.

“There is no people in the world,” noted Ibn Battuta, “wealthier than the Chinese.” He called Hangchow “the biggest city I have ever seen on the face of the earth.” This was the same city described by Marco Polo as “beyond dispute the finest and noblest in the world.”

The Arab from Tangier turned homeward the way he had come, except that he avoided Delhi altogether. He passed once again through Mecca and Baghdad and, in 1348, stopped at Damascus. There he enquired about one of his sons whom he had left 20 years before. He discovered that the boy had been dead 12 years and his own father 15.

The Black Plague was then raging through the Middle East. At Cairo Ibn Battuta reported a daily death toll of 21,000, a figure that historians confirm. Ibn Battuta passed through town after town scourged by the plague, but providentially he escaped infection for had he been stricken, his name would have been soon forgotten. He had not yet recorded his travels.

Even after he returned to Tangier in 1349, Ibn Battuta was not content to spend his remaining days at home, where he might have passed many a pleasant hour spinning stories of distant lands for his friends. His mother also had fallen victim to the plague during his absence, and with nothing to keep him in Tangier, he was soon planning a trip to Spain. After Spain, three years later, Ibn Battuta began his last journey. He traveled through west-central Africa, where he mistook the Niger for the Nile, and visited Timbuktu, a city that was considered legendary by Europeans because none of them had been there. In 1354 the great traveler was called to Fez by his sultan, who ordered him to dictate a record of his wanderings to a court scribe.

Strangely enough, Ibn Battuta’s exploits were lost to the Western world for 300 years. Not until the nineteenth century, when his Rihla (Travels’) was discovered in Algeria, did his extraordinary roamings come to light. In contrast, Marco Polo dictated an account of his journeys to a contemporary while they shared a prison cell in 1296, and copies had circulated all over Europe by the fifteenth century. Had Ibn Battuta’s work received the same attention, his name would rank alongside Marco Polo’s as a synonym for world travel.