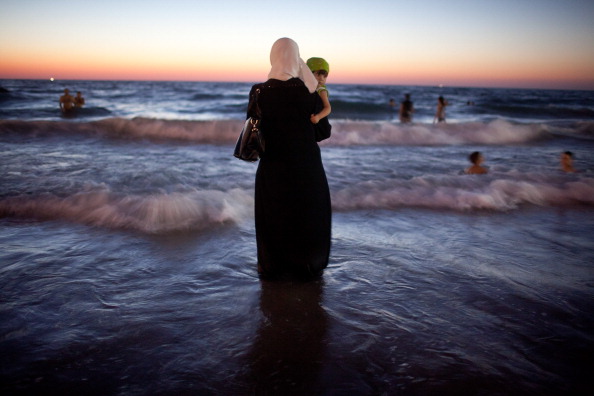 TEL AVIV, ISRAEL - AUGUST 21: (ISRAEL OUT) A woman holds her baby as Palestinians enjoy a day at a beach during Eid al-Fitr, which marks the end of the holy month of Ramadan on August 21, 2012 in Tel Aviv, Israel. According to the Israel's coordinator for government activities in the territories, Israel has allowed the entry of over 1 million Palestinians from the occupied West Bank since the beginning of Ramadan due to improved security. (Photo by Uriel Sinai/Getty Images)

Where do you find Paradise? The Prophet Muhammad (peace and blessings be upon him) said, “ Paradise is at the feet of the mother.”

This is variously interpreted to mean that the mother is responsible for teaching her children their religious obligations and good behaviour that will win them Paradise; or it may mean that we earn Paradise by serving our mother throughout her life.

Either way, it shows the great esteem, honour and respect that Islam has for mothers. While the fourth Commandment in the Bible is “Honour thy father and thy mother”, the Bible does not mention the mother separately as deserving good treatment.

The Qur’an, in contrast, gives special recognition to the mother’s suffering in bearing and nursing her child: “And We have enjoined on man to be good to his parents: In travail upon travail did his mother bear him and in two years was his weaning. Show gratitude to Me and to your parents” (31:14). (see themodernreligion.com under women)

Today in the Muslim world, even where many of the precepts of Islam are ignored, Westerners are often amazed at the gentle, loving treatment that parents receive. An Arab proverb says if you want to know how a man will treat his wife, look how he treats his mother.

Becoming a mother is one of the greatest joys of a Muslim woman. She knows that her child is both a gift and a trust from God. She carries a great responsibility in raising a family, not only in caring for their physical needs, but also in educating them in their religion and morals.

For this and other reasons, Islam calls upon all Muslims, male and female, to be educated, for how can a woman teach her children when she herself is ignorant?

Islam also recognizes that, compared to the man, the woman is by nature more psychologically fitted to nurturing, more compassionate and patient. For that reason, Islam decrees that husbands must maintain their wives and children, and it encourages mothers with young children to remain at home with their children rather than work outside the house. And, in case of divorce, custody of young children goes to the mother.

All this respect and honor goes to the mother, even if she is a non-Muslim, and also to maternal aunts. Thus the woman does not cut from her own family when she marries, but her children continue to honor the kin relationships of both their mother and father.