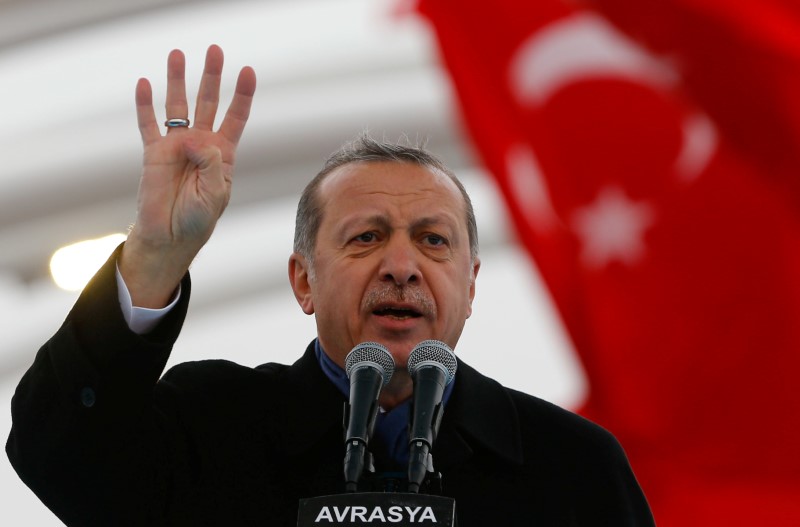 ANKARA (Reuters) – Turkish President Tayyip Erdogan will be able to appoint and dismiss government ministers, take back the leadership of the ruling party, and govern until 2029 under plans approved by a parliamentary commission on Friday.

The approval by the constitutional commission after a 17-hour overnight session means the plans for an executive presidential system, long sought by Erdogan and the ruling AK Party he founded, have passed their first hurdle.

The proposal will now go to a vote in parliament’s general assembly, before a referendum expected by spring.

Erdogan and his supporters argue that Turkey, a sometimes turbulent country of 79 million people, needs the strong leadership of an executive presidency to prevent a return to the fragile coalition governments of the past.

Erdogan has already turned a largely ceremonial presidency into a powerful platform, drawing on his unrivalled popularity, but opponents fear the reform will fuel authoritarianism in the NATO-member and EU candidate country.

Turkey is already under fire from Western allies over its record on rights and freedoms, especially after widespread purges in the wake of a failed military coup in July.

The reform will give the president full executive power, enabling him to appoint and dismiss deputy presidents and ministers, as well as top state officials.

Contrary to the current system, the head of state will also be allowed to maintain ties to and lead a political party. Erdogan renounced the leadership of the AKP, which he founded a decade and a half ago, when he won the presidency in 2014 but still retains strong influence over it.

According to the draft, the president will also have the authority to declare emergency rule, which currently requires parliamentary approval. Turkey has been under emergency rule since the weeks following the failed putsch on July 15.

AKP sources said party lawmakers had been told in a written note that the draft would be debated in the general assembly in January, including at weekend sessions if needed. If approved, a period of 60 days must pass before holding a referendum.

The AKP needs the backing of the nationalist MHP opposition to push through the legislation. Constitutional change needs the support of at least 330 deputies in the 550-seat assembly to go to a referendum. The AKP has 316 deputies eligible to vote and the MHP 39, though a few have voiced opposition to the reform.

The plans foresee elections in 2019 and a maximum of two five-year terms, meaning Erdogan could rule until 2029.

The main opposition CHP and the pro-Kurdish HDP had sought to block the draft, arguing that it amounted to a fundamental change in the country’s political system.