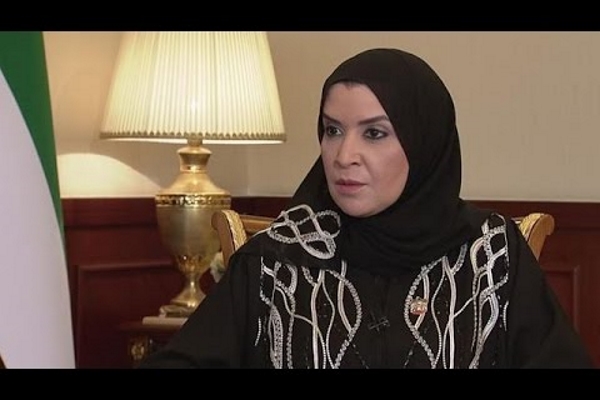 The Emirati Amal Al Qubaisi is the President of the Federal National Council of the United Arab Emirates – the region’s first female leader of a national assembly and is one of the most influential women in the Arab world.

She visited Belgium immediately after the terrorist attacks in Brussels to meet the EU Commission.

She belongs to the 50 Most Powerful Arab Women in the World and fights for openness and tolerance.

Euronews: “When you met Federica Mogherini, the European Union Foreign Policy chief in Brussels, immediately after the terrorist attack how do you remember those days?”

Amal Al Qubaisi, President of UAE Federal National Council: “There was some advice that maybe you shouldn’t go, maybe it’s better to let things cool down on the security level, and also the people’s wounds were very fresh. And as a Muslim leader I might be seen not in the right place.

‘I insisted more on going, because I thought it’s the best time to be there for, first showing solidarity, secondly bearing condolences and most importantly to prove to everyone that they will not shake us, they will not succeed in bringing as apart.”

Euronews: “The UAE-EU relationship made “common understanding”. What have you agreed on together?”

Amal Al Qubaisi, President of UAE Federal National Council: “We discussed the situation in our region in the Middle East and I made it very explicit that we are really so frustrated because unfortunately extremism and terrorism are related to Islam. We can clear out all this misunderstanding we feel that Islam has been hijacked from us.

‘Hijacked by people and these terrorist militias and groups who have their own political agenda, who want to destroy all the good relations that we have with the West and the East who would also like unfortunately to not see any stability in our world.

‘If we allow them to do this, if we believe that Islam is behind this and Muslims are really the bad guys this will be itself a huge success for them. We should not allow it. So we joined agendas, our agendas are alike. We are waging the same war against terrorism. We have also to create immunity against the terrorist ideologies that are around us, against the use of youth and children to be, you know, a ticking bomb, to be the ones who are exporting extremism and terrorism within their countries. We have also to build this together.

‘We discussed this and she thinks that myself as a Muslim woman who is in this position is a very good example of clearing this misunderstanding of what we are, you know, the meaning of our own religion is peace and that we are against what is happening and we cannot tolerate it and because of that we have zero tolerance with intolerance.”

Euronews:
“Extremist Islamists have produced a bad perception of Muslims in Europe and elsewhere. How can the UAE deal with that?”

Amal Al Qubaisi, President of UAE Federal National Council: “Dealing with that abroad is to build stronger and better communication, is to come together unified and building the right understanding.

‘Our fight against terrorism and this kind of perception that is unfortunately misleading people, innocent people around the world are paying the price. We need more gatherings and more events that bring people culturally together so that they will understand each other’s culture.

Euronews: “Is there anything more that the UAE can do in easing the Syrian crisis apart from the Humanitarian aid?”

Amal Al Qubaisi, President of UAE Federal National Council: “We believe that a political solution is the only solution. Unification of the lands of Syria should also be maintained. It’s very important to keep all this hope for the sake of the children of Syria, the most vulnerable, and for the sake of having a better future for our region and not only our region also the whole world.”

Euronews: “Recently the first summit with 50 women speakers of parliament from around the world was held here. So, was an agreement on any issues reached?”

Amal Al Qubaisi, President of UAE Federal National Council: “There are more than 50 women speakers all around the world. We represent more than 25% of the parliaments in the world. This is in itself a power. And not only that. As women we intend to bring all the goodness we can for our people, so that we can make our people happier and make them safer.”

Euronews: “What is on the agenda for the future?”

Euronews: “Emirati Media told me more then once “Amal Al Qubaisi makes history”. Which was the first critical, your first ‘win’ in your professional life?”.

Amal Al Qubaisi, President of UAE Federal National Council: “Running through elections, the first elections and being the first and the only woman who won that time. I think I made history for my country not for me. And from there, only ten years later, becoming the President of the Parliament.

‘This is a great achievement, that we are very proud of in the UAE because in many countries around the world the women took a very long time to win the right to vote, to have the right to nominate themselves and then to become, you know, a President of a Parliament it took ages and decades. At the UAE we excelled all expectations.”

Euronews: “What more can be done to push women’s role in society?”.

Amal Al Qubaisi, President of UAE Federal National Council: “What is so special about us that we have been what we are, gradually, naturally. We gained it, because we earned respect and that’s why women at the UAE are the indicators. At the international level we are number one in the respect of women. And we have also have taken the number one status in the women empowerment of the Arab world. And also in bridging the gap between and balancing between both sexes.”

Euronews: “So there is no more gender gap?”

Amal Al Qubaisi, President of UAE Federal National Council: “No there is no more gender gap. Actually now our focus is how we can help others to become and also succeed in what we have done.”

Euronews: “In the world, you mean?”

Amal Al Qubaisi, President of UAE Federal National Council: “In the world. Especially around us. As I said through the parliamentarian diplomacy but also through creating the right public opinion and one of the most, you know, strategic partners we need to work closely with is the communication and media industry. The media has to be fair. The media has to bring the right picture. That’s why I have great respect for your media, for Euronews.”