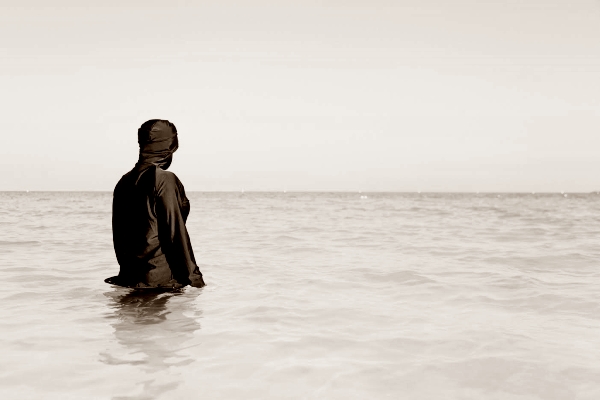 So much of 2016 can be summed up by the startling picture of a Muslim woman on a beach in Cannes. Surrounded by four policemen, she was forced to disrobe, under the shadow of a French mayor’s ban on burkinis.

In the United Kingdom, the then prime minister David Cameron allegedly called Muslim women “traditionally submissive” and was schooled when he suggested that not speaking English was the problem. When Donald Trump claimed that Pakistani American mother Ghazala Khan – whose son Humayun was a United States Army captain who died while serving in Iraq – didn’t speak when she attended the Democratic Party convention alongside her husband because she probably wasn’t allowed to, the internet came alive with roars of “can you hear us now” from Muslim women.

This was the year the world finally noticed Muslim fashion. The burkini photo and others like it prompted a rush by non-Muslim women to purchase this new item that freed them from the demands that women be beach-body ready. Dolce & Gabbana announced a range of couture abayas. New York Fashion Week hosted Indonesian designer Anniesa Hasibaun’s collection, the first to feature only women wearing the headscarf.

This was a glimpse into a world of vibrant, expressive, vocal and increasingly affluent women challenging the falsely constructed “Muslim bogeywoman”.

But this was shut down by those who seem obsessed with excluding Muslim women. The French equalities minister threw herself into opposing women’s fashion choices and the partner of Yves Saint Laurent called Muslim women’s fashion barbaric and blasted any designer who works in this sector. So back we went to what Muslim women wear.

At the Olympics, fencer Ibtihaj Muhammad won bronze and Dalilah Muhammad snatched gold in the hurdles. The Olympics produced another of the year’s iconic images, of Egyptian and German beach volleyball players united in sport, though others chose to make it about their clothes.

Olympic swimmer Yusra Mardini fled her home in Syria as a refugee. She was part of a group of four swimmers who saved 20 refugees on a sinking boat by pushing it to safety.

German chancellor Angela Merkel followed other leaders by again reducing Muslim women to the burqa, and the burqa to suffering, and the only kind of suffering that Muslim women feel.

Aung Sang Suu Kyi was busy denying the plight of Rohingya Muslims in Myanmar, where women are raped, trafficked and worse. Neighbouring Bangladesh turns fleeing refugees back at their border, in violation of international law.

We were led to heartbreak on Twitter by seven-year-old Bana Al Abed from Aleppo. With the help of her mother, Fatemah, she tweeted the world her experiences.

The takeaway from this year has to be that we must go beyond the burqa.

Those who care to look will see energy, dynamism and the vigorous currents of change among Muslim women, even while they still face the challenges of systemic barriers, poverty and war.

Their stories will shape 2017, and we’d better watch out.

Shelina Janmohamed is the author of the books Generation M: Young Muslims Changing the World and Love in a Headscarf.