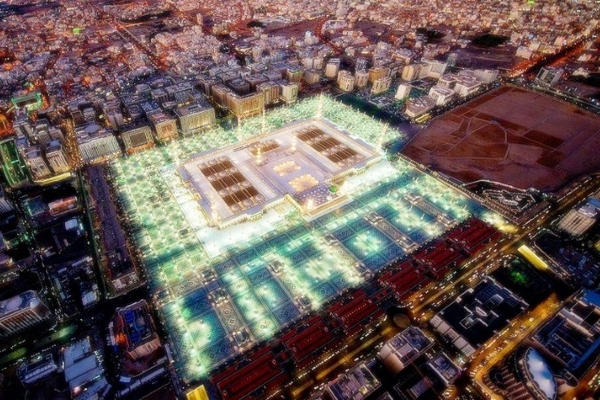 Friends have invited me to give a talk on Madinah, describing what I saw there, and I have readily agreed. As a Persian poet has said: “To talk of the beloved is no less pleasant than to meet him.”

I do not know when I first heard of Makkah and Madinah. Like all Muslim children, I was brought up in an environment in which Hijaz (Arabia) and Makkah and Madinah were household words. I, distinctly, remember people saying Makkah, Madinah together as if these were the same. When they took the name of one of them, they, generally, mentioned that of the other as well. I, thus, came to imagine that Makkah and Madinah were not two different places, but one, and learnt to appreciate the difference only as I grew up. It, then, became clear that these were two different towns separated from each other by over 300 kilometers.

In my childhood, I had heard people talking about Arabia and the two towns with the same fervor and enthusiasm as they did about Paradise and its joys and comforts, and it was from that time that I was seized with the desire to attain Paradise and visit Arabia.

Soon I realized that it was not possible for anyone to see Paradise during his lifetime, but he could, of course, go to Arabia. Parties of Hajjis (pilgrims) were visiting it regularly. So, why could I, also, not make a visit to that ‘Paradise of Faith?’

Days rolled by and I grew in age. My old eagerness was revived when I read books on the life of the Holy Prophet (Allah bless him and grant him peace) and studied the history of Islam, and the urge to perform the Hajj and make the pilgrimage to Makkah and Madinah became so strong that I was never without it.

Then, it so happened that I did reach the place where neither the grass grew nor rivers flowed. Only barren mountains stood on all sides of it like sentinels. Yet, as famous Pakistani poet Hafeez Jullundri has said:

Neither grass grows here nor flowers bloom,
Yet even heavens bend themselves low to meet it.

As I saw the apparently unattractive stretch of land, I felt how devoid of scenery that town was. At the same time, however, I thought what a great favor it had bestowed upon mankind. Without it, the wide world would have been nothing more than a golden cage, and man, a prisoner. This was the town that took man out of the narrow confines of the earth and made him acquainted with limitless possibilities of development, and restored to mankind its glory and freedom. It relieved humanity of the heavy load under which it was groaning and broke the fetters unjust rulers and ignorant lawgivers had put around its feet.

As I reflected over what the world would have been without this town, I thought of comparing it with the bigger towns of the world and seeing what would have been the loss of human race and civilization had the latter not come into existence. One by one, all those towns came to my mind, and I felt that they were flourishing merely for the sake of a handful of men and had made no notable contribution to human progress and happiness. On the contrary, they had been guilty of various sins against man, at various stages of history. For selfish gain, one town had razed the other to the ground, and one country had ravaged the other countries.

Civilization would have been none the poorer without those cities. But without Makkah, humanity would have, certainly, remained unblessed with truths, beliefs, ideals and sciences that were its pride today. It was owing to it that the world regained the imperishable wealth of Faith and rediscovered the true knowledge that lay buried under a thick crust of conjecture and speculation. It got back the dignity and nobility that had been trampled under the feet of cruel oppressors. In fact, humanity was reborn at Makkah, and history turned a new leaf.

But what am I saying? What do I mean when I ask: What would the world have been like had there been no Makkah? It had remained asleep, until the 6th Century, with its dry mountains and huge sand dunes, even with the House of Ka’aba and the Well of Zam-Zam, while humanity was caught in the clutches of death. Surrounded by its mountains and sand dunes, it went on leading a secluded life as if it had nothing to do with the larger human family, and was not a part of, but apart from the world that lay around it.

I should, therefore, not be enquiring what would have been the state of the world without Makkah, but without its illustrious son who turned the scales of history and showed a new path to mankind.

As I reflected on it, a few scenes emerged on the landscape of my mind. It appeared as if the leader of the Quraish was circumambulating around the House of Ka’aba, alone and by himself, and people were jeering at him and passing sarcastic remarks, but he was carrying out the circumambulation with supreme indifference to all hostility and opposition.

On finishing the circumambulation, he wants to go into the House of Ka’aba, but the key-bearer, Osman bin Talha checks him with a firm hand. The leader of the Quraish bears it, too, with exemplary fortitude, and says: “Oh Osman! What will it be like on the day when the key will be in my hand and I will give it to who I please?” “Will all the Quraish be dead on that day?” asks Osman in anger. “No”, he replies. “On that day, they will attain real respect and honor.”

I, then, see the same leader circumambulating around the House of Ka’aba, on the occasion of the Victory of Makkah, and his Companions who had sacrificed their all for his sake gathering around him like moths. He sends for the keeper of the key, and says to him: “Osman! This is your key. Take it. Today is the day of showing kindness and keeping the promise.”

After performing the Hajj, I flew towards Madinah on the wings of eagerness. The hardships of the way seemed to be a blessing to me, and before my eyes was drawn the soul-stirring image of the earlier traveler whose camel had passed through the same route.

The first thing I did on reaching Madinah was to offer two Rak’ats of salat and express my sincerest gratitude to the Almighty for granting me the good fortune to be there. After it, I betook myself into the ‘presence’ of the Holy Prophet (Allah bless him and grant him peace). How boundless was his favor upon me, really! I could never give thanks to him as was his due. I offered Durood and Salaam, and affirmed that he had conveyed the Message of the Lord to the world, proved true to the trust He had placed with him, showed the Straight Path to the Ummah, and strove till the last breath of his life in the way of God.

I, then, made the salutation to both the trusted friends of his whose selfless devotion was without a parallel in history. No one had discharged the duties of companionship or fulfilled the obligations of succession as they did.

From the Prophet’s Mosque, I went to Jannat ul-Baq’ee. What a priceless treasure of truth and purity, of love and dedication is buried in this small plot of land! Asleep here are those who had sacrificed the life of this world for the life of futurity. These are the men who willingly abandoned their hearths and homes in the way of faith, and preferred to spend their lives at the feet of the sacred Prophet (Allah bless him and grant him peace) than with friends and relatives. “Among the Believers are men who have been true to their covenant with Allah.” [Al-Ahzab 33:23].

Would that Uhud gave something of its treasure to mankind! Would that the world got a small particle of the faith and steadfastness of those glorious times!

Friends say: “You took us to Cairo and acquainted us with its important personalities; you have told us about Damascus and its people, and introduced us with its scholars; you have taken us round the Middle East. Now, tell me something about Hijaz and its distinguished sons.” But what am I to do? To me Hijaz stands only for one man about whom I can go on talking forever. It is because of him that Hijaz is Hijaz, and the World of Islam is the World of Islam.

Our honor, indeed, is by Mustafa’s name!