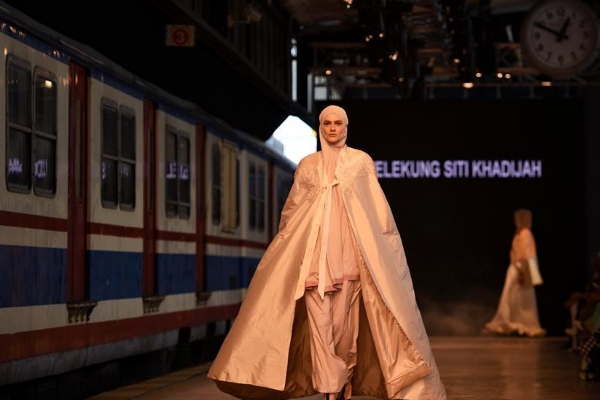 On one hand, the year 2016 invited several positive and negative opinions on the role of religion versus personal choice of clothing post France’s burkini ban furore. On the other, New York Fashion Week debuted a show by Indonesian designer Anniesa Hasibuan featuring a hijab through its every look on the runway. Around the same time, a 15-year-old Saudi teenager demanded a hijab-clad emoji, while a fully clothed Libayan-American journalist Noor Tagouri wearing a hijab appeared in the October edition of Playboy! Was 2016 the year of modest fashion movement? Well, it surely took a few steps towards changing the global perception.

The so called ‘modesty movement in fashion’ is led by the global Muslim clothing market that is forecast to be worth 327 billion dollars by 2020, according to the latest Global Islamic Economy report. As the western hemisphere takes note of how modest fashion is becoming more mainstream, several Western brands such as DKNY, Tommy Hilfiger and Dolce & Gabbana have entered the booming market with exclusive collections.

Modest fashion made headlines in 2016 for all the right and wrong reasons. What started as a political debate over burkini ban in France in August, was swiftly followed by 19-year-old Halima Aden becoming the first Miss Minnesota USA competitor to wear a hijab and a burkini during the beauty pageant in November 2016. The Somali-American participant not only fully-clad herself for the competition’s swimsuit category, but she also kept her hair under wraps for all other rounds of the event. She went on to celebrate this historic moment on Instagram.

However, Aden is not the only woman to sport a hijab or a burkini on a global platform. In September 2016 Indonesian designer Anniesa Hasibuan’s models hit the New York Fashion Week Spring/Summer 2017 runway wearing hijab, trousers, tunics and long-sleeved dresses. And in November Muslim beauty blogger Nura Afia, whose YouTube channel counts over 200,000 subscribers, featured in CoverGirl’s mascara commercial ‘So Lashy! BlastPro’.

November also saw the first ever edition of what was called a ‘Muslimah Fashion Show’ for Muslim women was hosted in Tokyo, Japan.

A report by Islamic Fashion & Design Council (IFDC) states that the impact of social media has been huge and the main reason why modest fashion is an international topic of discussion. It adds that young hijabi Instagrammers like Maryam Asadullah, Sobia Masood and others have created a trend whereby they share their stylish modest outfits, tips and tutorials and that the trend was picked up and followed by many instantly.

Experts say, Muslim millennials (born between 1980 and 2000), called ‘Generation M’, are emerging as the next big opportunity for global brands. According to the latest Global Islamic Economic Review by global knowledge services provider Thomson Reuters, global spending by Muslim consumers is expected to increase to 2.6 trillion dollars by 2020. Ogilvy Noor, the Islamic branding consultancy of Ogilvy & Mather states that young Muslim women will lead Muslim consumption, as they have greater disposable income with higher education level and employment rates.

The Muslim fashion market was 230 billion dollars in 2014, and it is expected to double to 484 billion dollars by 2019. Western brands and retailers are cashing in on the opportunity. DKNY and Mango launched special Ramadan collections and Tommy Hilfiger and Dolce & Gabbana created a line of luxury hijabs and abayas targeted at this segment. Marks & Spencer’s burkini swimwear created a fashion storm and Uniqlo launched a LifeWear range of flowy dresses and hijabs with Muslim fashion designer, Hana Tajima. H&M featured a hijab-wearing model in a campaign and online-shopping platform Net-a-Porter showcased a section called the Ramadan Edit.

There is undeniably a modest fashion craze that has been going on across the globe this past year or two with big brands in fashion, celebrities, entrepreneurs and important forums aboard taking a note of this movement. This trend is seeing mainstream brands like Tommy Hilfiger, Mango, Zara and DKNY coming up with modest collections which is something they have never done before. We are also seeing many celebrities including Rihanna and Kim Kardashian wearing the Islamic headscarf, the hijab and Beyoncé dressing in an abaya, says the IFDC study.

Muslim shoppers are of the opinion that exclusive modest fashion collections should be created round the year rather than confining them to the period around Ramadan and must be made available in every part of the world.

Melanie Elturk, CEO of modest fashion line Haute Hijab’s reaction on Instagram after Hasibuan’s show at NYFW this year supports the sentiment. “Many believe fashion is frivolous and devoid of meaning…I believe fashion is one of the outlets in which we can start that cultural shift in today’s society to normalize hijab in America, break down stereotypes and demystify misconceptions,” she said.

Some apparel brands like Uniqlo, are certainly trying to cater to the modest fashion followers across the globe. Its Hana Tajima LifeWear collection, for instance, consisting loose blouses, skirts, dresses as well as traditional kebaya and hijab are available in certain Singapore stores and online platforms. The aim is to cater to all the consumers in general without really targeting a specific community.

Modest fashion made heads turn in the western fashion world and retailers are leveraging on this opportunity. As Reina Lewis, a professor of cultural studies at London College of Fashion and the author of “Muslim Fashion: Contemporary Style Cultures”, points out, “Modest fashion and Muslim fashion are no longer on the periphery of the industry, and an industry that stopped being able to afford to be elitist and exclusive long ago. This movement is really driven by an empowered new demographic who are expressing their presence in the modern world, and attempting to assert their place in it.”

For now, the demand for this category is driven by the Muslim community. However, with western brands and fashion weeks showing keen interest in the fashion trend, it’s way ahead would be determined by the times to come.