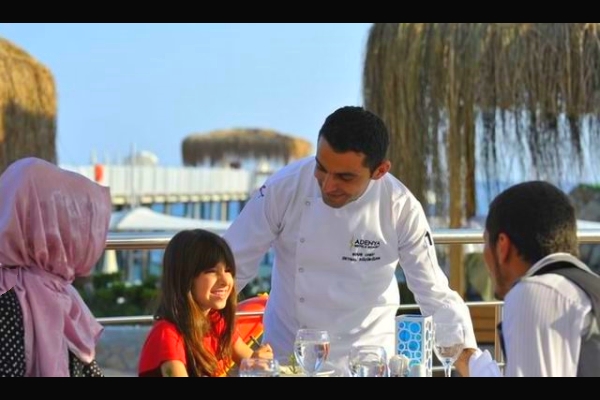 Elnur Seyidli is a man who is teeming with ambition. At the age of 39, he has already lived and worked in six countries and chaired ­several businesses across the globe. But perhaps the biggest feather to his bow is yet to come. As the chairman and co-founder of ­HalalBooking.com, he says all bets are on his latest brainchild being a billion-dollar business in just five years’ time.

Coining his company as the “halal version of Booking.com”, he is confident that a confluence of global mega trends will drive the growth of his London-based travel booking start-up. “If you’re a Muslim from Malaysia and you’re travelling to Peru, we should be your answer. If you’re from Indonesia and you’re travelling to London, we should be your answer,” says Mr Seyidli.

According to the halal research company CrescentRating, the Muslim market continues to be one of the fastest growing segments in the global travel industry. Last year, it was estimated that there were 117 million Muslim international travellers. This is projected to grow to 168 million by 2020, where the travel expenditure by Muslim travellers is expected to exceed US$200 billion.

Global halal travel trends are being driven by the world’s rapidly expanding Islamic population, buoyed by a growing proportion of Muslims being born into the middle classes.

“The middle class in countries with large Muslim populations is increasing; these nations include Gulf countries, Indonesia, Malaysia, Turkey, Nigeria and Bangladesh,” according to MasterCard and CrescentRating’s Global Muslim Travel Index 2016 report. “The second and third generation of Muslims in Western Europe and North America are also becoming highly educated and entering the professional workforce. All of this is increasing the disposable income of a large Muslim consumer base.”

Eager to tap into this growth, HalalBooking launched its Muslim friendly travel-booking platform in 2009. The website is now one of the world’s largest independent halal travel sites with 140,000 customers on its books, offering user reviews and booking facilities for halal beach resorts. The site allows users to search under specific halal criteria, such as women-only spas, halal-only restaurants or private bathing. HalalBooking features 1,000 global properties but Mr Seyidli plans to increase this roster to up to 10,000 properties by the end of next year, as well as broadening the site’s scope to include city break hotels.

“We are solving a problem, a real problem,” says Mr Seyidli. “My business partner came up with the idea because he is a Turkish Muslim traveller who was trying to solve a problem for himself. He had gone through many obstacles and spent lots of time researching and trying to find a halal-friendly holiday. It was then that he turned to me and said ‘surely we could start a business that helps people search refined property according to their own halal needs?’”

So Mr Seyidli and his partners – Muslims with experience at FTSE 100 and travel companies – set about forming HalalBooking with the aim of creating a single platform for Muslim travellers to get their individual halal needs met wherever they travel to.

“In three to five years, we want to be a total end-to-end travel, search and book platform for the halal-conscious traveller. Whether it’s for health, business or leisure and whether it’s accommodation or day or night services,” the chairman says.

“That is our mission. In terms of market and destination, we want to be from anywhere to anywhere.

“In terms of destinations, we are now very strong in Turkey and UAE but as a priority we want to get into big European cities, such as London and Paris, as well as Asia Pacific destinations. In the long term, we’re also focusing on North Africa, America, and Eastern Europe as destinations.

“Next year, we’re going to develop other product lines like ground services. These are our short-term plans surrounding market, destination and technology expansion.”

About 70 per cent of HalalBooking.com’s source clients are based in the European Union, with an even split across the UK, Germany and France. Mr Seyidli says that 10 per cent of users are GCC-based but he expects this figure to grow “massively” in the next two years, along with other regions such as Turkey, Malaysia and Indonesia.

“Our Arabic website was launched just over a year ago and our marketing in those countries, until this year, was very minimal or non-existent. But now we’re becoming a much richer company, we will be investing more in the GCC and Malaysia.”

The Global Muslim Travel Index 2016 report notes that “the proliferation of internet access coupled with high penetration of smartphones has made travel planning easier in many Muslim-majority nations. Countries such as Saudi Arabia and the UAE are among the top countries when it comes to smartphone penetration. A younger more technology-savvy population also means more Muslims are active on social media and use it to get information.”

With all the growth drivers pointing in a stellar direction, Mr Seyidli predicts that HalalBooking will double in size by the end of next year. “I’ll be disappointed if we don’t achieve that,” he says. “In five years time, we’re looking at one million customers and $1bn revenue.”

The chairman says he plans to go public with an initial public offering in “three to five years” and is tying up the company’s latest investor cash injection of up to $3 million. In total, the company has so far attracted cash investments of $1m and has been valued at $30m.

When London-based Mr Seyidli isn’t on a plane (he says he travels abroad once a week) he’s busy dreaming up new revenue streams.

“Currently Halalbooking.com operates as a marketplace to book services and charges 15 per cent on average for every booking. In the future, we may have a clear advertisement section like TripAdvisor and we may invite other halal players to advertise with us, such as ­clothing providers,” the chairman says.

“But in the near term, we could host suppliers who might not be bookable directly through our website such as halal restaurants, but they want to be there because of our relatable traffic. These people will pay for us.”

Halalbooking.com doesn’t individually verify the Islamic credentials of each property but instead uses a high-tech self-­certification system.

“Fundamentally, we are a high-tech engineering project and that’s why we’ve been so overwhelmingly successful so far. We have a very good mobile website. It works in any country, in six languages and you can do the whole thing via your mobile – from searching to booking to payment,” he says.

“I enjoy the fact that we are ­solving a real problem for the global Muslim population. We have so many customers e-mailing us and praising us saying ‘thank you’.

“It’s not just about money, obviously we want to make money and be commercially successful, but apart from that, we’ve built a brand that solves real problems for real people.”