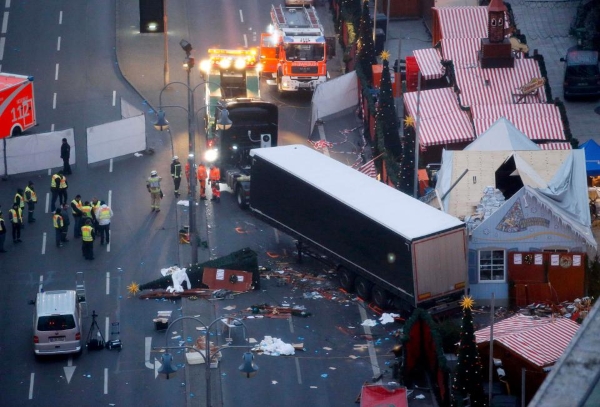 A website linked to the so-called ISIS extremist group has claimed that an ISIS militant movement was responsible for a December 19 attack in Berlin, where a man drove a truck through a crowded Christmas market, killing 12 people and wounding 50.

A website linked to the so-called ISIS extremist group has claimed that an ISIS militant movement was responsible for a December 19 attack in Berlin, where a man drove a truck through a crowded Christmas market, killing 12 people and wounding 50.

In a December 20 statement, the AMAQ website said: “The executor of the operation.. in Berlin is a soldier of the Islamic state and he executed the operation in response to calls to target nationals of the coalition countries.”

Meanwhile, German authorities were continuing to search for the perpetrator of the attack on December 20 after prosecutors released a Pakistani asylum seeker who had been the sole suspect in the case.

Prosecutors said they lacked evidence against the 23-year-old Pakistani man.

German Interior Minister Thomas de Maiziere says authorities in Berlin cannot rule out that the man behind the deadly attack is still on the run.

Maiziere told reporters that German police have no doubt that the deadly truck rampage was a terrorist attack. But Maiziere said the motives of the attacker remain unclear.

Maiziere also said that authorities are now following several leads in their investigation.

Maiziere’s remarks and the ISIS claim of responsibility came just hours after the Berlin police chief said it was not clear if a man arrested after the Christmas market attack was actually the driver of the vehicle.

“As far as I know it is in fact uncertain whether that really was the driver,” Berlin Police President Klaus Kandt said on December 20.

Berlin police said earlier that the arrested man had denied any involvement in the attack at a popular meeting and shopping area near the iconic Kaiser Wilhelm Memorial Church, in the west of the capital.

German Chancellor Angela Merkel has called the truck rampage, in which the vehicle plowed 80 meters through the crowd, a “terrorist attack.”

“There is much we still do not know with sufficient certainty, but we must, as things stand now, assume it was a terrorist attack,” Merkel said on December 20.

Investigators are still scouring the grisly scene at a popular meeting and shopping area near the iconic Kaiser Wilhelm Memorial Church, in the west of the capital, where the previous night’s attack also injured nearly 50 others.

Merkel said that “it would be especially hard for us all to bear if it were confirmed that [the] person who committed this act was someone who sought protection and asylum” in Germany.

Citing German security sources, Western news media are reporting that the main suspect is a 23-year-old migrant from Pakistan who was living in a hostel for refugees in Berlin.

The man, who police say was the truck’s driver, was detained near the market as he tried to flee the scene shortly after the truck plowed 80 meters into the crowd.

News agency dpa reported that the suspected driver came to Germany within the past year.

Merkel has long been under political fire by critics over her decision in 2015 to admit almost 1 million migrants — most from Syria, Iraq, and Afghanistan — into Germany on humanitarian grounds as they backed up on southern EU borders.

Many Germans are reported to see integrating the newcomers as the country’s biggest challenge.

German police found another man sitting in the passenger’s seat of the truck used in the attack whom they said was Polish and who died at the scene, despite efforts by medics to save him.

The German magazine Focus Online quoted Brandenburg Interior Minister Karl-Heinz Schroeter as saying on December 20 that the Polish citizen was a victim, not a perpetrator, of the attack.

German police said they are working on the assumption that the truck used in the attack was stolen.

Polish broadcaster TVN 24 reported that it belonged to a Polish trucking company.

The company’s owner, Ariel Zurawski, told news media that the truck driver, his cousin, had been transporting steel to Berlin and was now missing after not answering telephone calls since the afternoon before the attack.

“They must have done something to my driver,” Zurawski told German TVN24.

The incident prompted France, which experienced a similar truck attack by a sympathizer of the militant group ISIS (ISIS) in Nice in July that killed 86 holiday celebrants, to heighten security at Christmas markets across the country.

The White House condemned “what appears to have been a terrorist attack” and said the “horrific incident” appeared to “target our way of life.”

The U.S. State Department issued a European travel alert in November warning Americans of a “heightened risk of terrorist attacks throughout Europe, particularly during the holiday season,” and urging “caution at holiday festivals, events, and outdoor markets.”

After the December 19 incident, U.S. President-elect Donald Trump blamed an “Islamist terrorist” without citing evidence, saying ISIS and “other Islamist terrorists continually slaughter Christians in their communities and places of worship as part of their global jihad.”

“These terrorists and their regional and worldwide networks must be eradicated from the face of the Earth, a mission we will carry out with all freedom-loving partners,” Trump said. Trump pledged during his campaign to block the entry of Muslims seeking to enter the United States.

The incident comes less than six months after the Bastille Day attack in Nice, France, and two other attacks in Germany thought to have been inspired by ISIS.

In July, a 17-year-old claiming to be an Afghan asylum seeker attacked passengers on a Bavarian commuter train with an ax and a knife. A week later, a 27-year-old Syrian asylum seeker blew himself up outside a music venue in the Bavarian town of Ansbach, injuring more than a dozen people.

A 12-year-old boy with dual German-Iraqi citizenship also allegedly attempted to explode a nail bomb at a Christmas market in the western German city of Ludwigshafen a few weeks ago.

Christmas markets have a long history in Germany stretching back to the Middle Ages and have grown dramatically to become popular places to socialize — to drink mulled wine and to eat holiday food in the weeks running up to Christmas.

With reporting by Reuters, AP, AFP, and dpa