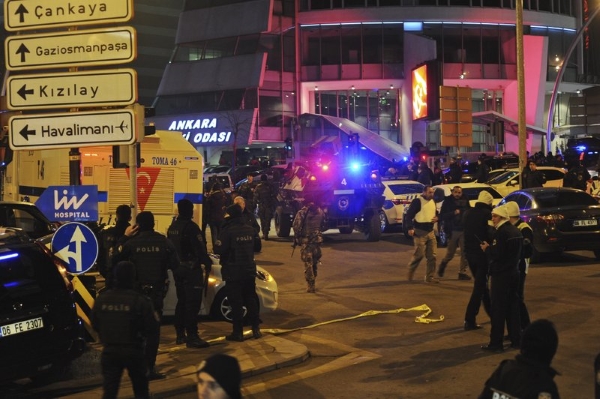 Russian and Turkish officials have agreed in public that the motive of the assassin who killed Russian Ambassador to Turkey Andrei Karlov was to disrupt relations between the two countries.

Responding to the December 19 shooting at a photo exhibition in Ankara, Russian President Vladimir Putin said the killing was “obviously a provocation designed to derail the normalization of Russian-Turkish relations and to derail the peace process in Syria that is being actively promoted by Russia, Turkey, Iran, and other countries.”

Turkish President Recep Tayyip Erdogan the same day also labeled the killing a “provocation aimed specifically at deteriorating the normalization process of the relationship between Turkey and Russia.”

A December 20 meeting between the foreign ministers of Turkey, Russia, and Iran to discuss the conflict in Syria went ahead in Moscow as planned.

Experts quoted in the Russian media also sought to lay blame for the ambassador’s killing on the West.

Writing on Facebook late on December 19, Kremlin-connected analyst Sergei Markov said that a contributing factor in the ambassador’s assassination was “the atmosphere of hatred toward Russia that has been actively cultivated by Western politicians and mass media over the last three years.”

He added that members of the European Parliament, who “have been lying about Russia for three years and are in a state of hysterical hatred,” “bear a large share of responsibility for the act of terror against this Russian diplomat.”

In another post, Markov said “one possibility” is that it was the action of “madmen in the Western special services.” U.S. President Barack “Obama didn’t give the order to shoot the Russian ambassador, but it is possible that officers of the CIA did so on their own initiative.”

The nationalist Russkaya Vesna website quoted political scientist Aleksandr Sotnichenko as saying that “for the Islamists and their sponsors in the United States, Qatar, and Saudi Arabia it is categorically unacceptable to resolve the Syrian problem through a dialogue between the three main positive forces — Russia, Turkey, and Iran.”

Video of the killing showed the gunman, identified as 22-year-old riot-police officer Mevlut Mert Altintas, yelling that his act was “payback for Aleppo,” seeming to refer to Russia’s support for Syrian President Bashar al-Assad in its recent assault to retake the Syrian city that has forced hundreds of thousands of civilians to flee.

Relations between Russia and Turkey were badly strained shortly after Moscow began its military intervention in Syria when Turkey shot down a Russian warplane along the Turkey-Syria border on November 24, 2015. One of the Russian pilots was killed in the incident, and another Russian serviceman died when a rescue helicopter came under fire from anti-Assad forces.

“The theme of Russia’s intervention in Syria has united both the left and the right in Turkey,” Suleimanov said. “The ultrarightists like the Gray Wolves, ultraleftists, radical Islamists — they all oppose what Russia is doing in Syria and in the Middle East generally. It might not even be a group, but some individuals, just a few people, who decided to ‘take revenge’ on the Russian ambassador for Russia’s actions in Aleppo.”

Relations began to improve in June, after Erdogan sent Putin a letter expressing “deep regret” for the incident.

Political scientist Leonid Isayev, who teaches at the Higher School of Economics in Moscow, notes that the months of high tensions have left their mark on Turkish society.

“In Turkey, everything that was said about Russia during this time was the same as what was said in Russia about Turkey,” Isayev tells RFE/RL. “Russia was depicted as a destructive force in the region and was blamed for inflaming conflicts, including instability within Turkey itself. It is obvious that in the mind of the average Turkish citizen who consumes the local media, a certain image of Russia as an enemy of the country has formed.”

“We now see the results of these policies,” he added. “In Russia, there is an enormous number of people who do not understand why suddenly relations between Turkey and Russia are better…. And the same can be said for Turkey — many Turks simply don’t understand why ‘we have to be friends with our sworn enemy.'”

Given this complicated security situation, Komsomolskaya Pravda military correspondent Aleksandr Kots expressed bewilderment that Ambassador Karlov was apparently without a security detail and not wearing a bulletproof vest, a measure he said would have been “entirely logical.”

Analyst Suleimanov says neither Moscow nor Ankara is interested in returning to the tense relations of the past, although the situation in Turkey — in view of the conflict in Syria, the large number of refugees in the country, the conflict with Turkey’s Kurdish minority, and the crackdown following an attempted coup against Erdogan in July — makes it difficult to see the future.

“Events in Turkey are unfolding unpredictably,” Suleimanov says. “On the Turkish chess board, there is an enormous number of extremely varied pieces.”